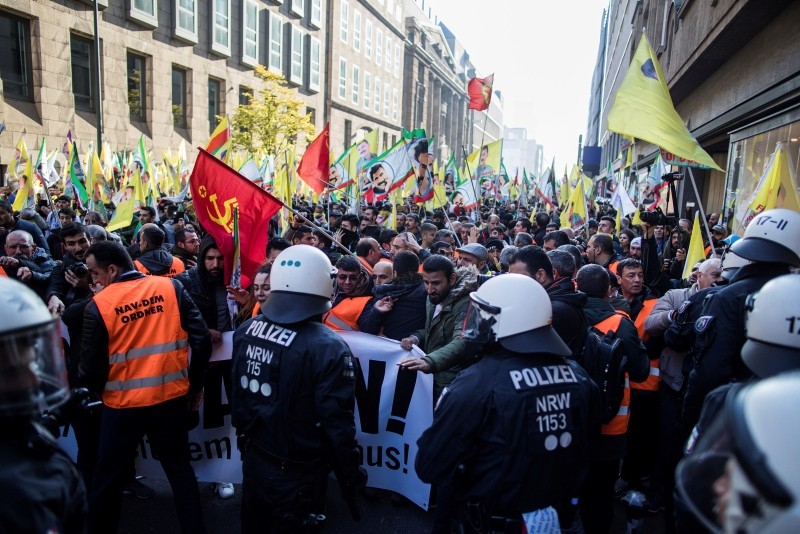 Germany's domestic intelligence service identified the Democratic Union Party (PYD) and the People's Protection Units (YPG) as the affiliates of the PKK terrorist group and a threat to internal security.

According to a report published by the interior ministry of northern Schleswig-Holstein state, the PYD was called a sister organization of the PKK, while the YPG was interpreted as one of its Syrian offshoots.

The report, which focused on the 2017 activities of illegal and terrorist organizations within Germany, said that the PYD had no separate presence in the state of Schleswig-Holstein but rather acted in line with a pro-PKK association in Kiel.

The report underlined that the PKK has been considered an illegal organization in Germany since November 1993, adding that it was also added to the EU terror list in 2002.

The intelligence report also gave details about previously organized pro-PKK rallies such as celebrations for PKK leader Abdullah Öcalan's birthday or the terror group's founding anniversary, suggesting that the organization is seeing Germany as a shelter and financial center.

"With a round of annually recurring events, the PKK retains its followers and spreads organizational propaganda," the report said, adding that German law regarding the ban of PKK symbols was frequently disregarded.

"Several meetings ended in disarray when police intervened against the display of forbidden symbols," it said.

"Of the approximately 800,000 ethnic Kurds living in Germany, 14,500 people - 700 of them in Schleswig-Holstein - are permanent supporters of the PKK," the report said, adding that the terror group is active almost nationwide in various clubs, especially within the umbrella organization NAV-DEM.

"The PKK in Germany has a conspiratorial and illegally-operating, hierarchical-structured official apparatus. After establishing an internal party system, Germany was divided into a total of 33 areas with each area having a regional official," the report elaborated.

The report also stated that PKK supporters no longer resort to violence since it contradicts with their interests, saying that they prefer to be beneficial for the organization by collecting donations, making protests and getting organized, which troubles the domestic politics of Germany.

Despite its international status as a terrorist organization, the PKK has enjoyed relative freedom in European cities and has a particularly strong presence in Germany. PKK supporters have been allowed to hold rallies, recruit militants and collect funds in Germany.

PKK supporters in Germany and other European countries have been lately attacking establishments of the Turkish community, raising security concerns for both Turks and Europeans.

In various incidents across Europe, Turkish schools, mosques and institutions have been targeted.