Like an octopus with no tentacles, pathetic Gülen is left with nothing but defeat 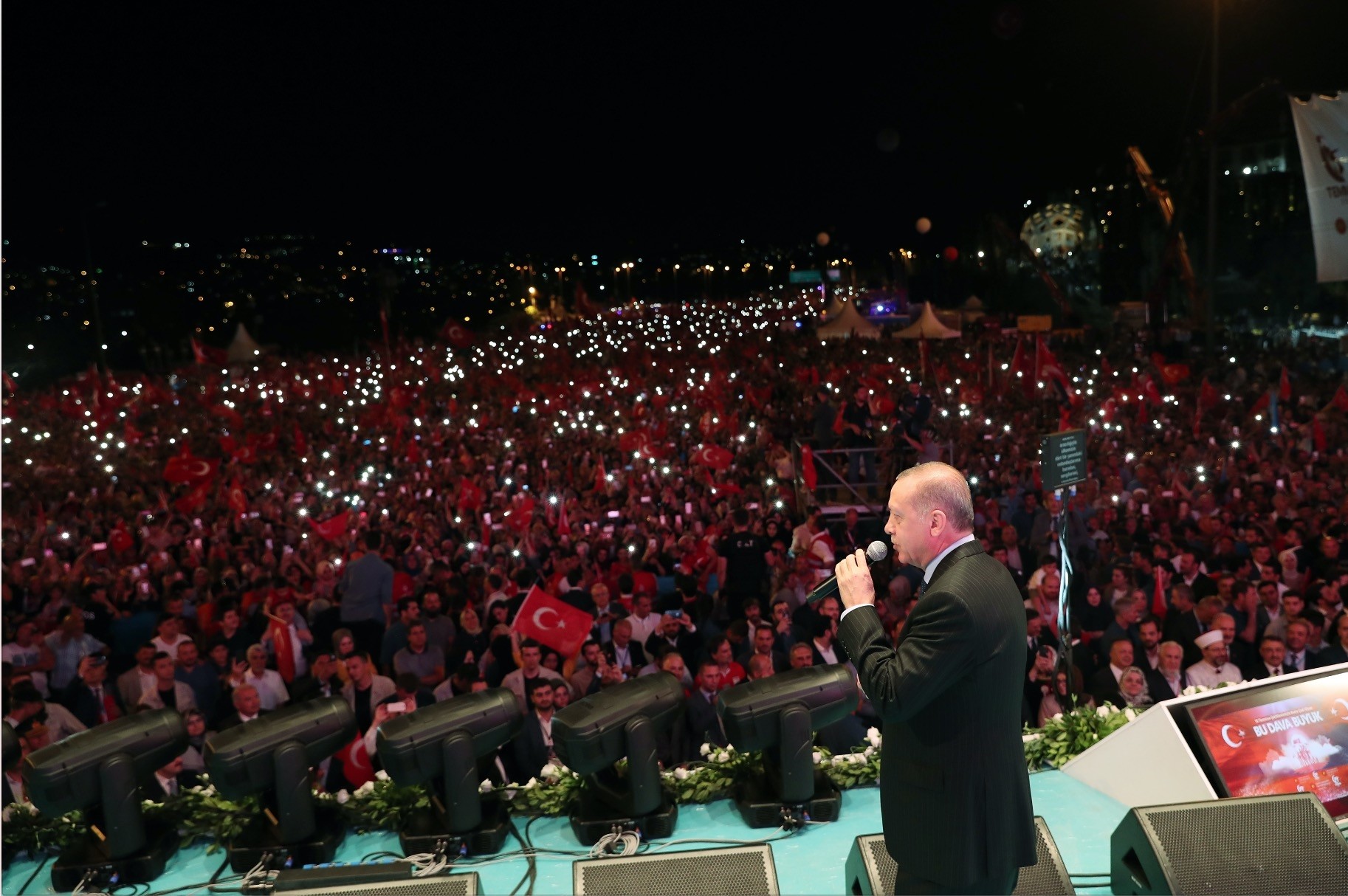 President Recep Tayyip Erdou011fan delivers a speech at a ceremony on the July 15 Martyrs Bridge in Istanbul on Sunday.
by daily sabah
Jul 17, 2018 12:00 am

With effective operations against the group, many operational FETÖ branches have been eliminated from state institutions, yet the fight continues, says President Erdoğan

Sunday marked the second anniversary of the failed July 15, 2016 coup attempt by the Gülenist Terror Group (FETÖ). In the past two years, Turkey increased its efforts against the group and exerted intensive and effective operations to eliminate its network, which has been deeply embedded in state institutions, as a result of the shady cult's activities in the country for the past 40 years. President Recep Tayyip Erdoğan described on Sunday the effectiveness of operations against FETÖ, which is led by Fetullah Gülen who lives in Saylorsburg, Pennsylvania, in the United States, as cutting the tentacles of an octopus.

"We have cut the arms of the octopus, which the devil in Pennsylvania has grown by hypocrisy, lies and in secrecy," Erdoğan said during his address to a large crowd in Istanbul, gathered to commemorate the failed coup, which is now being celebrated as July 15 Democracy and National Unity Day. "In the last two years, we've crumpled all the structures of the organization in the state, business community, bureaucracy, trade, media and civil society on a large scale," the president said. Ankara has said that the fight against the group will continue until all members are brought to justice for their illegal activities.

The octopus metaphor reflects the group's infiltration into the state through many of its arms, while the brain of the network, Gülen, sends out orders from his sprawling U.S. estate. As such, while the arms may have been made ineffective through government's operations against them, the command-and-control mechanism remains active, pushing the operations against the group to continue.

FETÖ carried out its latest maneuver against the Turkish state with the July 15 coup attempt, which left 250 innocent people dead and more than 2,200 others injured.

Through its infiltration into the state institutions, including the judiciary, the education system, the police and military, the group had gained the ability to carry out operations in favor of its long term aims, which was to overthrow the government and take control of the state. Its members had been placed in key positions in the judiciary, which at times enabled them to carry out operations against the government with forged documents.

Although the state realized the shady aims of the cult prior to July 15, the group received its biggest blow after the coup attempt. Thousands have been terminated from state institutions and many members of the group have been jailed, including those who partook in the coup attempt.

In addition to the infiltration into the state institutions, one of the significant features of the group is the ability of hiding their true intentions and identity in a method called "takiyye," literally meaning hypocrisy. While the group exploited religious sentiments of the general public and portrayed itself as a moderate religious group at work for educational purposes, this was nowhere near its true intentions and aims.

With the July 15 coup attempt, their true image had also become clearer in the public eye.

Erdoğan likened the people's resistance to the group's coup attempt to the country's Independence War and said it was a manifestation of the nation's will to protect democracy in the country.

"With July 15, we proved the maturity of our democracy to the whole world. With these developments, we have closed the books on coups permanently," he said.

"Murderers who shot our countrymen that night are getting the heaviest punishments," the president also noted, vowing to carry out their determined fight against the terror group.

Turkish democracy had previously fallen victim to several coup attempts by the military, which had not faced strong resistance from the people. On July 15, however, hundreds of thousands of people from all segments of society took to the streets against the putschists.

In addition to operations in the country against FETÖ members, Turkey has also exerted efforts against the group's followers who have used many Western countries as safe havens, including Gülen, the mastermind of the coup, who has been living in the U.S. since 1999.

Ankara says the extradition of Gülen has been demanded from the U.S. authorities, with boxes of documents submitted as evidence of the link between Gülen and the coup.

However, the Turkish officials say that the case has been turned into a political matter, rather than handling it as a sole legal matter, against Ankara.

Many members of the group have also sought asylum in European countries, including Germany, and have tolerated the group's activities within their borders.

During his speech in Istanbul, Erdoğan also criticized countries not cooperating with Turkey in fight against FETÖ terrorists.

He said the July 15 coup "showed Turkey who their real friends."

"Even if we are not mentioning this frequently, we will not forget this nor let it be forgotten," he added. "Those unprincipled ones, who embraced the putschist escaping our country, will not be erased from our memory."

He said that one of the merits Turkey will consider in its bilateral ties with other countries will be how they have dealt with FETÖ and whether they cooperated with Ankara in its fight against the group.

As part of its efforts, Turkey has also demanded the closure of group's institutions abroad, mainly its schools. So far group's schools in 16 countries have been closed and their operations have been transferred to Turkey's state-run Maarif Foundation.

As part of its methods of establishing links and widening its network of influence in developing countries, the group established schools and mostly recruited students from renowned families, including politicians, bureaucrats and influential business people.

Erdoğan added that so far about 80 fugitive FETÖ suspects have also been extradited to Turkey.