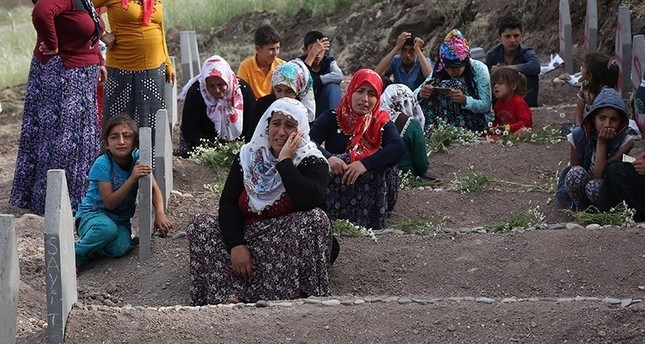 Family members of victims mourn at a cemetery in Du00fcru00fcmlu00fc village, the site of an explosion by PKK terrorists last week, near the southeastern city of Diyarbakir, Turkey May 19, 2016. (Reuters Photo)
by Daily Sabah with AA Aug 01, 2018 12:00 am

An 11-month-old baby was the latest victim of the PKK terrorist organization, which has killed, injured and disabled hundreds of children in its more than 30-year terror campaign against Turkey.

Mustafa Bedirhan Karakaya and his mother Nurcan Karakaya were killed in a roadside bombing by the PKK terrorist organization in Turkey's southeastern Hakkari province.

The bomb went off when a car carrying the civilians passed through the Yüksekova district.

The woman died on the spot, while the 11-month-old child succumbed to his wounds at the Yüksekova Public Hospital.

The PKK -- listed as a terrorist organization by Turkey, the U.S. and the EU -- has been responsible for the death of some 40,000 people, including women and children.

The image of 3-year-old Serkan Erdem, who was killed by the PKK in 1993 in southeastern Siirt province along with 22 people, showed the cruel face of terror to the world.

Jailed ringleader of the PKK, Abdullah Öcalan, was engraved in people's memory as "baby killer" following the release of this image.

In 2011, PKK terrorists opened fire on a car in Batman, killing a pregnant woman and her daughter. The baby was delivered through a C-Section but only managed to live for another day. The father and one of his daughters were severely injured in the attack.

In eastern Bingöl province, a mother attempted to prevent a suicide bomber from detonating. She could not stop the explosion but managed to prevent a bigger tragedy. The mother and her son died in the incident and a total of 21 people were wounded.

On March 13, 2016, the PKK terrorists attacked capital Ankara's central Kızılay square using a bomb-laden car; 36 people were killed, 125 others injured. Among the wounded was six-month pregnant Songül Yılmaz and her baby was the youngest victim of the terrorists.

On Jan. 14, 2016, six people, including a 5-month-old baby, were killed in a vehicle bombing in Çınar district of Diyarbakır, where 39 other people were injured.

On Aug, 11, 2017, a 15-year-old boy was killed by PKK terrorists in northern Turkey. Eren Bülbül died from gunshot wounds sustained as he helped gendarmes track PKK members in Maçka, a town 22 kilometers (14 miles) south of the Black Sea province of Trabzon.

Sixteen-year-old Yasin Boru and his two friends, who were distributing food aid, were among the killed, on the fourth day of Eid al-Adha.

On March 13, 2016, the PKK terrorists attacked capital Ankara's central Kızılay square using a bomb-laden car; 36 people were killed, 125 others injured. Among the wounded was six-month pregnant Songül Yılmaz and her baby was the youngest victim of the terrorists.

On April 13, 2016, 4-year-old Hidayet Tek was killed after an improvised device explosion in Turkey's southeastern province of Şırnak.

A 5-year-old Viyan Kanat was killed on July 10, 2016, at an attack perpetrated by PKK terrorists in Çukurca district of Hakkari.

On Dec. 25, 2015, four children were wounded in an attack on the Şırnak Cultural Center and Public Library in southeastern Turkey.

On Sept. 28, 2015, 9-year-old Elif Şimşek died after a rocket fired by PKK terrorists on an armed police vehicle missed its target and hit her apartment building in Diyarbakır's Bismil district.

On Sept. 12, 2015, two children were seriously injured in the southeastern province of Mardin after an explosive was left by PKK terrorists on the children's house's roof; 9-year-old Tahsin Uray, one of the two children injured, later succumbed to his injuries at Kızıltepe Hospital.

On Aug. 30, 2015, 13-year-old Fırat Simpil in Silvan district was killed in a roadside bomb blast blamed on the PKK terror group in Diyarbakır. The explosive device was believed to have been placed to target a military vehicle.

On Oct. 6-7, 2014, PKK attacks across Turkish left two police officers and 31 civilians dead following the incidents which started with the call of Peoples' Democratic Party (HDP). A total of 221 civilians and 139 police officers were also wounded.

Twelve people were killed in a rocket attack in Gürpınar district of eastern Van province on July 24, 1995.

Twenty-one people, including 11 children, were killed after PKK terrorists attacked Ormancık and Akyürek towns of Savur district in Mardin on Jan. 21, 1994.

PKK terrorists raided houses in Hani district of southeastern Diyarbakir province on Nov. 9, 1992, and 12 people, including four children and four women, were killed.

Thirty people, including eight children, were killed in southeastern Bitlis province on Oct. 1, 1992.

The PKK killed 10 people, including eight children, in a raid on the houses of two village guards in southeastern Batman province on June 22, 1992.

Eleven people, including eight children from the same family and two women were killed by PKK in Taşköy town in Mardin on May 9, 1988.

Çiftekavak Massacre (Sept. 21, 1987): Five women -- two of them pregnant -- and four children killed in PKK raid on a village in southeastern Şırnak province.

A total of 25 civilians, including two babies, lost their lives in a PKK attack in Eruh district of southeastern Siirt province on Aug. 19, 1987. Fourteen of them were under the age of 18.

Nine people, including 7 children from the same family and two women, were killed in Midyat district of Mardin in July 1987.

Thirty people, including 16 children, were killed in a PKK attack in Ömerli district of Mardin on June 20, 1987.

Eight people, including six children, were executed by a firing squad in Nusaybin district of southeastern Mardin province on March 7, 1987.

A total of seven people, including six students, were killed after PKK detonated a bomb-laden vehicle in front of a private teaching institution while a military vehicle passed in Diyarbakır on June 3, 2008.

The PKK also targeted educational institutions. In 2011, a masked group set off fireworks at a primary school in Kızıltepe district of Mardin. No casualties were reported.

The terrorists fired molotov cocktails at a dormitory on May 27, 2011. Three students were injured after a fire broke out following the attack.

In 2009, terrorists threw molotov cocktails at a bus in Bağcılar district of Istanbul. 17-year old Serap Eser succumbed to her wounds at a hospital.

In 2010, a total of nine people, including a 2-year-old boy and an 11-month-old baby, were killed in a mine attack in Hakkari. Four people were also injured during the attack.