Brunson's spiritual son accused of linking pastor to the PKK 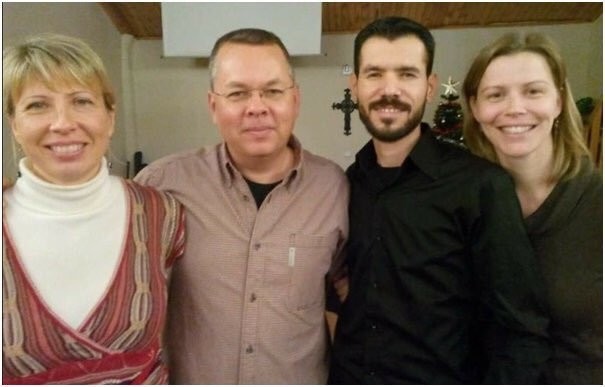 An indictment against pastor Andrew Brunson, whose arrest has caused distress in Turkey's relations with the U.S., claims that the pastor was linked to the PKK through his spiritual son

The relation between the PKK and American pastor Andrew Brunson, who is under house arrest in Turkey facing terror charges, is coming to light as Mohammad Ahmad, known as the "spiritual son" of Brunson, has been accused of being the link between the pastor and the Gülenist Terror Group (FETÖ).Introduced by Brunson as his spiritual son, Mohammad Ahmad, who uses the nickname "Mardini Dilbirin," was mentioned in the indictment, according to Turkish media reports, as the person who provided the connection between Brunson and the PKK, as well as the PKK's Syrian wing, the People's Protection Units (YPG).

In September 2016, Andrew Brunson, a pastor for the last 20 years at the Evangelic Resurrection Church in the western city of Izmir, was arrested in Turkey for alleged links to the PKK terrorist group and FETÖ, who orchestrated an attempted coup on July 15, 2016.

It was claimed in the bill of indictment against Brunson that Ahmad married a missionary named Loes Truffle under the direction of Brunson and his wife. Ahmad's brother Agrid was also accused of spying activities by an anonymous witness.According to media reports quoting the indictment, Brunson sent Ahmad to Belgium before his arrest. It was revealed that Ahmad continued the activities of the İzmir Christian Kurds Church (Dera Kurden Mesihi-İzmir) at the "Dera Kurden Mesihi Belçika" church in Belgium as a pastor.

Ahmad has referred to the Resurrection Church, where Brunson was the pastor, as the İzmir Christian Kurds Church on his social media accounts. Ahmad also referred to the leader of FETÖ Fetullah Gülen as a "Turkish clergy."

"The pastor of Resurrection Church [Andrew Brunson] in the Alsancak district of İzmir was detained by the state a while ago with the accusation that he has a relationship with Turkish clergy Fetullah Gülen. At the same time, our church which has been active for approximately two and a half years have also been shut down by the state due to our Kurdish identity," said Ahmad on his social media account, supporting Brunson and twisting the reason behind the closure of the church by referring to his Kurdish background.

Sharing pictures of the PKK leader Abdullah Öcalan, Ahmad did not hesitate from accusing Turkey and the Turkish Military harshly, without any concrete reasons. The church Ahmad is currently working for also has the flags of the PKK, as can be seen on his social media account, alongside pictures of Ahmed with Brunson.

The U.S. President Donald Trump said on Monday that he will fight for the release of Brunson.

Hosting evangelical leaders at a White House dinner, Trump said they were still trying to bring Brunson back to the U.S., receiving huge applause from the crowd.

Evangelical Christians have long lobbied for Washington to exert pressure on Ankara to secure Brunson's release; however, although Brunson has been under house arrest due to health concerns, his appeals of release have been rejected three times so far, the latest of which occurred last week.

He is scheduled to appear before a court in October for his third hearing and faces 35 years in jail for charges of espionage.