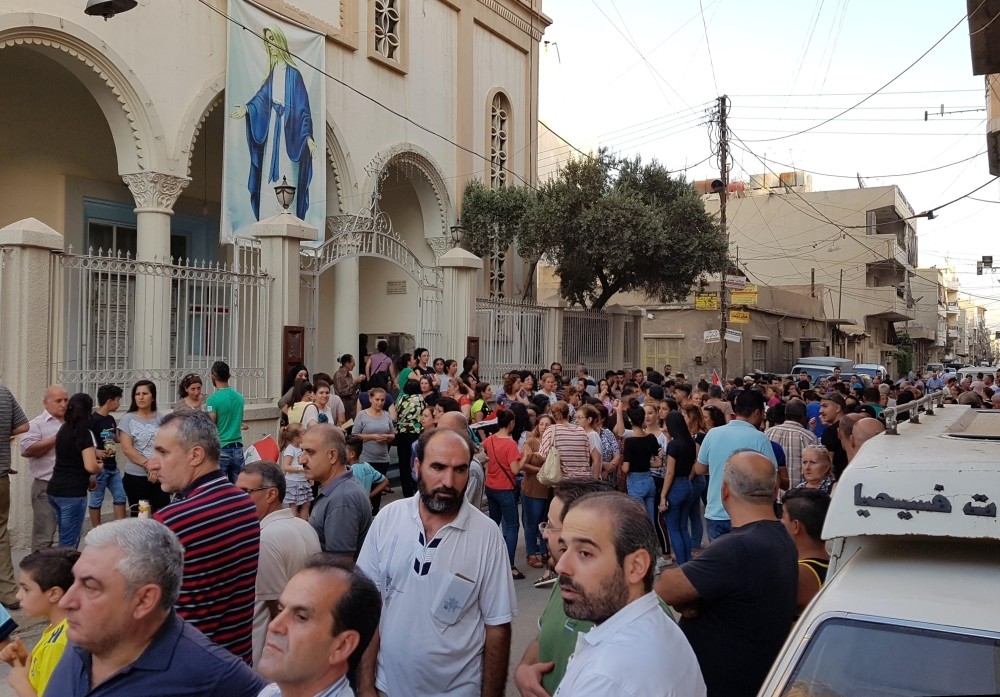 Christians came together in the Qamishli town center, demanding the reopening of their schools.
by Daily Sabah Aug 30, 2018 12:00 am

Unrest erupted among Syrian Christians in recent weeks against PKK-affiliated groups in northern Syria due to the closure of their schools as part of the oppressive policies of the terrorist organization.

Dozens of Christians gathered in the center of Qamishli to protest the closure of two Christian schools in mid-August. The protesters shouted slogans, demanding their schools to be reopened.

The protesters were confronted by the YPG terrorists, who opened fire in the air to disperse the crowd. The crowd dissolved after an hour-long of demonstration.

On Aug.18, the pastors and heads of the churches in Hasakah came together in Qamishli and declared that it was unacceptable for the YPG to shut down their schools.

The U.S. support for the Syrian Democratic Forces (SDF), which is dominated by the YPG, has long been a cause of tension between Ankara and Washington. The U.S. had also given truckloads of military support to the YPG, despite Ankara's repeated warnings that the group is organically linked to the PKK, which is listed as a terrorist organization by the U.S., Turkey and the European Union.

The YPG has used schools in areas under its control to indoctrinate students with its militarist, ethnocentric ideologies. The terrorist organization has been teaching militarist ideas based on ethnic belonging in the schools for three years now. During the upcoming academic year, the YPG reportedly hopes to expand the use of its curriculum to high schools. The YPG hopes to make the curriculum it teaches to primary schools and ninth grades more widespread by teaching it to the 10th and 11th grades, as well. Parents who aim to keep their children away from terrorist propaganda lean toward private schools; however, the terrorist organization has not left these schools untouched either, raiding, threatening and eventually shutting them down. On Aug.10, the terrorist organization widened its pressure on education and shut down the Assyrian schools in Qamishli.

The Armenian and Assyrian private schools in the town of Malikiyah, also known as Derik in Kurdish, were also closed on Aug. 7 with decrees issued by YPG-linked local education authorities citing that they did not take necessary permissions or abide by the curriculum.

The Assyrian Democratic Society (ADS) had accused the YPG of "intimidating" the region's Assyrian community.

"The YPG is harming education by promoting its ideologies through school curriculum," the ADS said in a statement, going on to demand that the terrorist group immediately allow the schools to reopen. Various Christian groups also condemned the closures.

The private Assyrian schools, administered by the Syriac Orthodox Church, have been operating in the region since the mid-1950s and have been implementing a curriculum specializing in the Assyrian language and religion developed jointly with the Syrian Education Ministry.

The YPG previously received numerous condemnations by international human rights bodies, including Human Rights Watch (HRW), Amnesty International and the United Nations, for its violations of human rights, including arbitrary arrests, forced recruitment of ch ld soldiers and forceful relocation of locals.In August, HRW said the YPG is recruiting children from displacement camps in the country's northeast in violation of international law. Last year, the U.N. found 224 cases of child recruitment by the YPG and its female forces, nearly five times the number in 2016. It said the YPG had forcibly abducted the children in at least three cases.

The YPG has kidnapped dissident Kurdish politicians, particularly from the Syrian Kurdish National Council (ENKS) and figures who criticized them for a number of reasons, in addition to collecting ransom from businesses.