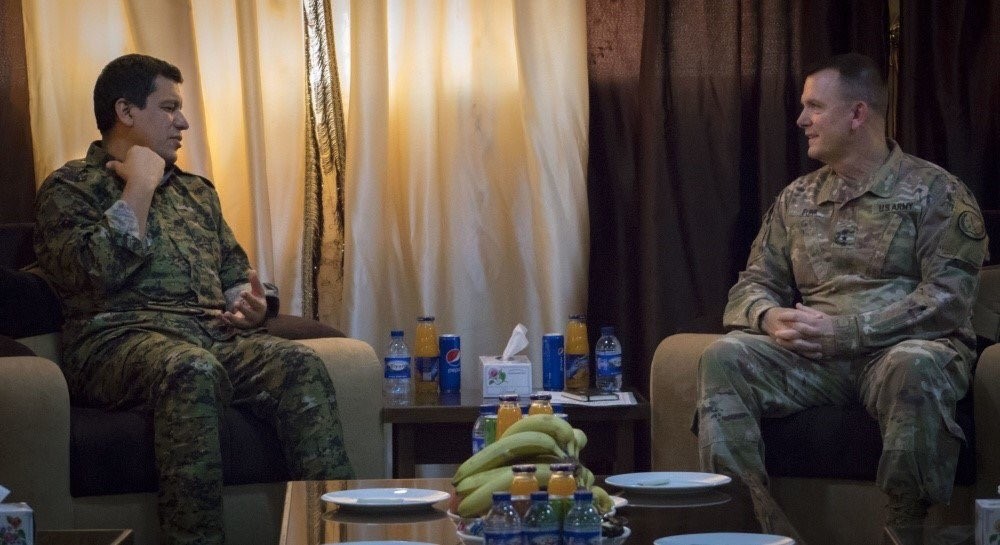 On Thursday, a commander in the U.S.-led coalition in Syria met a prominent figure in a PKK-affiliated group, who is on Turkey's most-wanted list.

The official account of the coalition, known as the Special Ops Joint Task Force-OIR, published a photo of the meeting of U.S. Gen. Paul Funk and Ferhad Abdi Şahin, codenamed "Mazlum Kobani." Şahin is a senior figure in the People's Protection Units (YPG), the Syrian affiliate of the PKK terrorist organization. "Gen. Mazloum, commander of Syrian Democratic Forces, talks with Lt. Gen. Paul E. Funk, commander of @CJTFOIR, at a meeting near Ayn Issa, Syria. The SDF ground offensive continues south to liberate the remaining areas of the Middle Euphrates River Valley," the tweet said. Şahin was in the red category of the Interior Ministry's wanted list, which is divided into five color-coded categories, with red as the most wanted, followed by blue, green, orange and grey.

He is known to be close to jailed PKK leader Abdullah Öcalan and was sent to Syria after civil war broke out in that country.

U.S. support for the Syrian Democratic Forces (SDF), dominated by the YPG, has long caused tension between Ankara and Washington. The U.S. had also given truckloads of military support to the YPG, despite Ankara's repeated warnings that the group is organically linked to the PKK, listed as a terrorist organization by the U.S., Turkey and the European Union.