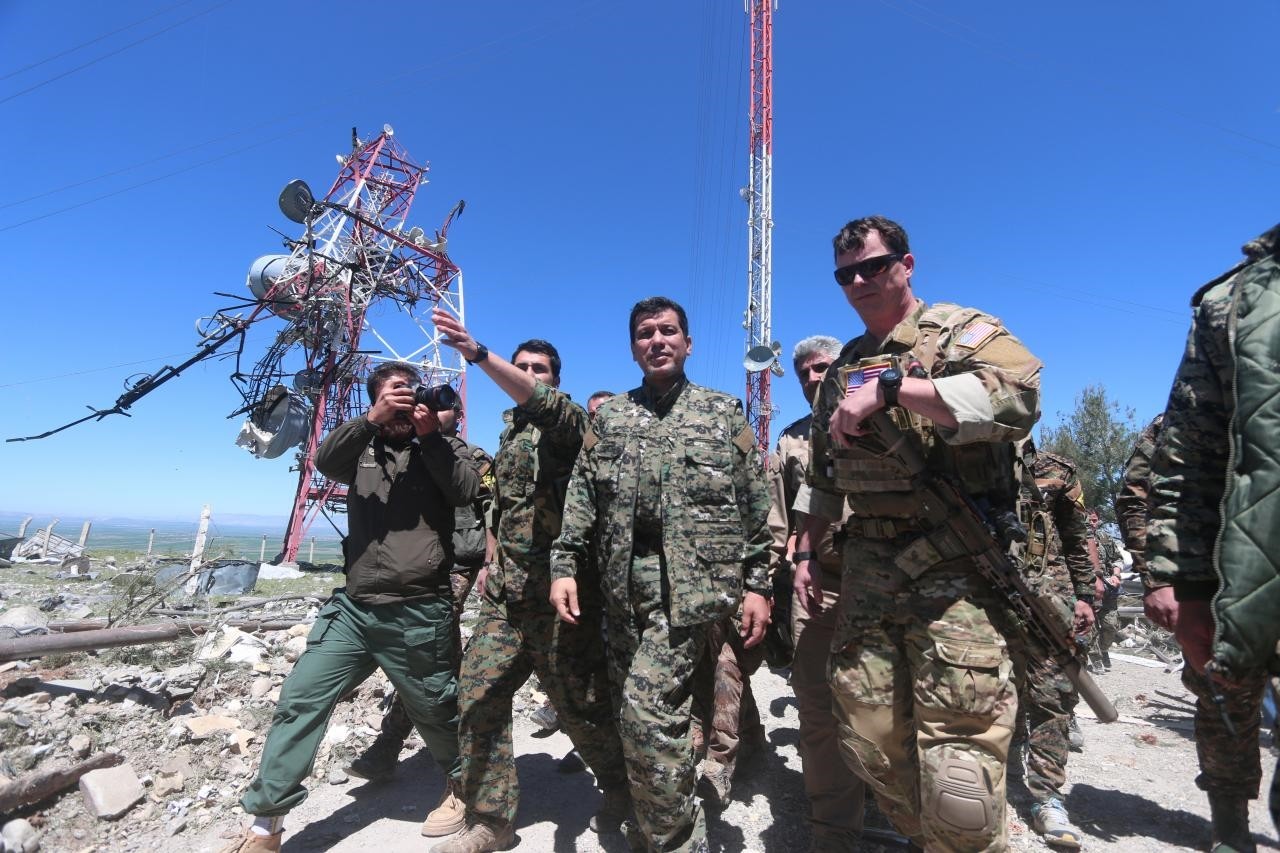 A U.S. military commander (R) walks with a commander (C) from the Kurdish People's Protection Units (YPG) as they inspect the damage at YPG headquarters after it was hit by Turkish airstrikes in Mount Karachok near Malikiya, Syria. (Reuters Photo)
by Daily Sabah with AA Sep 21, 2018 12:00 am

The U.S. State Department omitted the People's Protection Units (YPG) and its political entity the Democratic Union Party (PYD) from its 2017 Country Reports on Terrorism, which was released Wednesday.

The previous edition of the report noted that Turkey views the Syria-based PYD/YPG as an extension of the PKK militant group.

The report also said that Turkey refers to Fetullah Gülen as the leader of the Gülenist Terror Group (FETÖ), but the State Department described him as an "Islamic cleric".

"Turkey's counterterrorism efforts were impacted in the aftermath of the July 2016 coup attempt due to the government's investigation of ...FETÖ," it said.

The State Department's move to remove YPG/PYD from its terror list contradicts U.S. intelligence agencies' assessments and statements by some U.S. officials.

In January 2018, the U.S. Central Intelligence Agency (CIA) officially confirmed that it sees the Democratic Union Party (PYD), which is headed by chairman Salih Muslum, as the Syrian wing of the internationally-recognized terror group PKK.

Despite the previous U.S. administration's insistence on recognizing no direct links between the PKK, YPG and PYD in Syria, former U.S. Secretary of Defense Ashton Carter had recognized the link between YPG/PYD and the PKK while testifying before a Senate panel at the U.S. Congress in April 2016.

After admitting the link between the PKK and PYD, Carter acknowledged that the PKK is a designated terror group by the U.S., Turkey and the EU.

A Tactical Action Report (TAR) prepared by the U.S. Army Training and Doctrine Command (TRADOC), had also confirmed the affiliation between the PKK and the PYD/YPG terror groups.

The U.S. government has long supported the YPG terrorist group with a vast amount of military equipment and heavy armament to fight Daesh. Despite Ankara's concerns, former U.S. President Barack Obama initiated the support program, which so far has sent nearly 5,000 truckloads and 2,000 planeloads of weapons. This has been continued by the Trump administration.

The lack of consistency from the Trump administration regarding the U.S.'s activities in Syria has fueled tensions and deepened the rift in relations with Turkey that was already complicated.