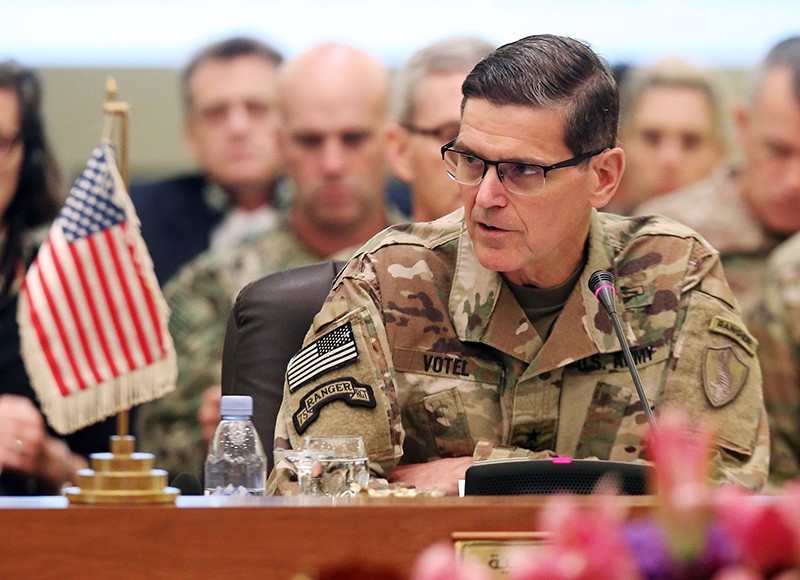 In this file photo taken on September 12, 2018, Commander of United States Central Command Joseph Leonard Votel speaks during a meeting with the Gulf cooperation council's armed forces chiefs of staff in Kuwait City. (AFP Photo)
by Daily Sabah with AA
Oct 04, 2018 12:00 am

The U.S. is "on track" with the Manbij road map agreement with Turkey, a top American commander said Thursday.

Gen. Joseph Votel, chief of U.S. Central Command (CENTCOM), spoke to reporters via teleconference, and discussed concerns about delays in the implementation of the road map.

Amid issues of the PKK-affiliated People's Protection Units (YPG) terrorist group's continued presence in the area, Votel said the U.S. would work to ensure that they are removed.

The Manbij deal between Turkey and the U.S. focuses on the withdrawal of the YPG forces from the city to stabilize the region, which is in the northeast of the Aleppo province in northern Syria. Washington has been reluctant to take action to remove YPG from the region, as it has backed the group in its fight against Daesh, a move criticized by Ankara.

"My understanding is that most of the YPG, if not all of the YPG, is out of Manbij right now. But of course, as we continue in implementing the road map there are specific activities within that to ensure that is the case," said Votel.

Turkey has criticized the U.S. for failing to comply with the road map in a timely manner, as the YPG continues to have a presence in the region.

In June, Turkish and U.S. forces began independent patrols in Manbij, however, joint patrols have yet to begin.

"As the Secretary (James Mattis) has recently commented on, we're engaged with our Turkish partners right now and moving to the combined joint patrols. The leader training has begun for that, and we'll move into the collective training here very shortly," Votel said.

Votel gave no timeline on when the patrols were expected to begin.

In its more than 30-year terror campaign against Turkey, the PKK has taken 40,000 lives, including many women and children. The YPG is its Syrian branch.