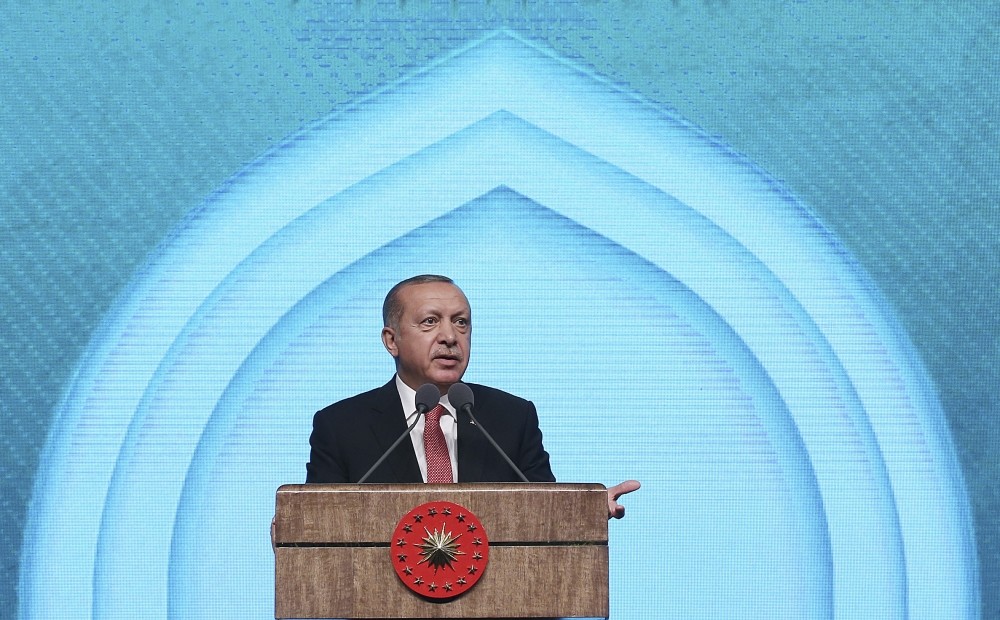 A lack of spiritual contentment enables terrorist organizations such as FETÖ and Daesh to effortlessly spread in society. This gap should have been filled by state-run religious entities in the first place, the president said

The lack of spiritual fulfillment is the main reason behind the easy infiltration of terrorist organizations, such as the Gülenist Terror Group (FETÖ) and Daesh, into the societies, President Recep Tayyip Erdoğan said yesterday.

Speaking at a meeting of clergy in Ankara organized for Mosques and Clergies Week, Erdoğan said that the spiritual needs of a society should be handled by religious institutions, such as the state-run Presidency of Religious Affairs (DİB), also known as Diyanet. In case of the lack of this spiritual support, the president emphasized, groups like FETÖ and Daesh find opportunities to sneak into the societies.

In spite of his critique of the religious institutions on the matter, Erdoğan also expressed his gratitude to the clergy, who called the Turkish people to stand up against the coup plotters in July 15, 2016 through their adhans, the Muslim call to prayer. FETÖ and its U.S.-based leader, Fetullah Gülen, orchestrated a defeated coup that killed 251 people and injured nearly 2,200 others in July 2016. The terrorist group, apart from carrying out the July 15, 2016 coup attempt through its infiltrators in the military, is known for its widespread clout in all sectors, from law enforcement and military to bureaucracy and judiciary. It is also accused of planting its infiltrators in Turkish institutions through exams that determine would-be civil servants.

The terrorist group faced more scrutiny after the coup attempt, which was its first attempt at using its adherents in the military to seize power, just three years after it had tried its hand at a coup through its infiltrators in the judiciary and law enforcement. Tens of thousands of people have been arrested or detained since the failed coup attempt, with a similar number having been dismissed from public sector jobs for links to the terrorist group.

Regarding to his recent visit to Germany, the president said he attended an inauguration ceremony for a mosque in Cologne.

"Currently, that mosque is being visited quite heavily, especially by Germans. I'm really glad to hear that," Erdoğan said.

The new religious center in Cologne is run by the Turkish-Islamic Union for Religious Affairs (DITIB), a Turkish-German Muslim umbrella association representing around 900 Turkish Muslim groups in Germany. The DITIB does community work and offers training for imams.

Referring his speech during the ceremony, Erdoğan said the false assumptions or knowledge regarding Islam, such as the perception that women should not go to the mosques, should be debunked as soon as possible. "There are still assumptions that make these ugly traditions seem like the [teachings of] Islam. We need to get rid of these. Are there any verses [of Quran] or hadiths that say women cannot go to mosques?" the president asked, adding that Diyanet should be the main institution to fight these false taboos.

Erdoğan also praised Diyanet for working across the globe for those in need, from Rakhine to Somalia, with its more than 140,000 personnel.

"This community, through the scholarships that it provides to the children of Muslim minorities everywhere around world, enables [those children] to receive educations on both religion and positive sciences," he said, indicating that clergy should distance themselves from rhetoric that excludes or discriminates against people.