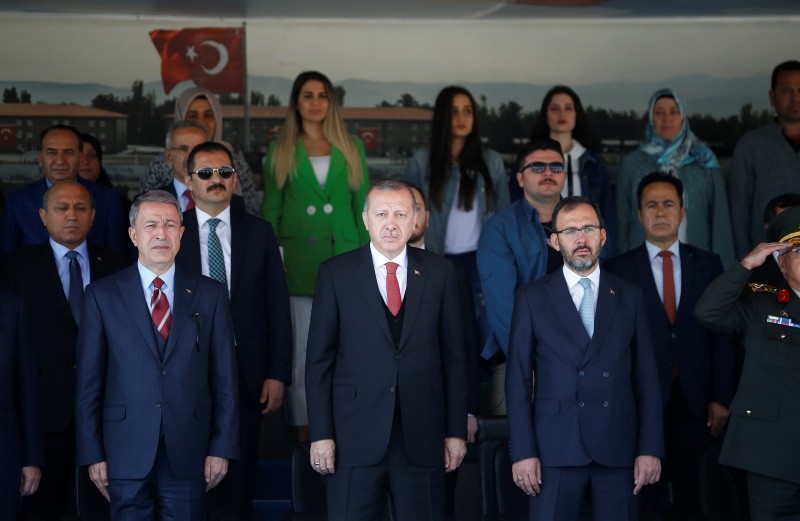 President Recep Tayyip Erdoğan signaled Friday a military operation against the PKK terror organization and its Syrian offshoot the People's Protection Units (YPG) in areas they control east of the Euphrates River.

Speaking at a military graduation ceremony in the southwestern province of Isparta held for Turkish special forces, Erdoğan said: "With the support of our commandos, hopefully, we will soon destroy the terror nests in the east of the Euphrates River."

The YPG is the dominating group in the U.S.-backed Syrian Democratic Forces (SDF), which controls almost all the territory in the east of the river comprising some one-third of the territory of Syria, except for the Assad regime-controlled area near Deir el-Zour and the Daesh-held area near the Iraqi border.

Turkey considers the YPG's presence on its border with Syria, with Manbij in particular, a grave threat against its national security. Manbij lies northeast of Aleppo but just south of the Turkish border.

After Turkey and the U.S. agreed on Manbij deal that focuses on the withdrawal of the YPG terrorist group from the city in order to stabilize the region, the terror group has to the contrary stepped up its presence and activities in the area.

"They [the U.S.] promised us. They said: 'We will leave here in 90 days'. They did not leave. Whatever is necessary will be done," Erdoğan said.

"Now, they are digging trenches in Manbij. What does that mean? 'We dug our graves, come and bury us.' We will also get in there."

Turkish and American forces are currently training to conduct joint patrols in Manbij, but Turkish authorities have repeatedly accused their American counterparts for delaying the YPG's withdrawal from the Syrian province and the group's presence in the district has been expressed as a "red line" by Turkish officials in terms of the country's national security.

Turkish troops and their allied Free Syrian Army (FSA) have captured bordering Jarablus, al-Rai and al-Bab districts from the Daesh terrorist group through Operation Euphrates Shield launched in Aug. 2016. While Daesh terrorists were on the retreat, the YPG also advanced to Manbij through a bridgehead and captured the town.

Erdoğan said Turkey dealt a major blow to the members of terrorist organizations at home. He added Turkey removed "traitors" in the army after a failed coup attempt staged by the Gülenist Terror Group (FETÖ) on July 15, 2016.

Speaking about the economy, Erdoğan said Turkey continues to maintain investments and expand its economy.

"Being exposed to some speculative attacks in the economy recently does not change the fact that we are the world's 13th largest country in terms of purchasing power parity and ranked 17 in terms of national income," he added.