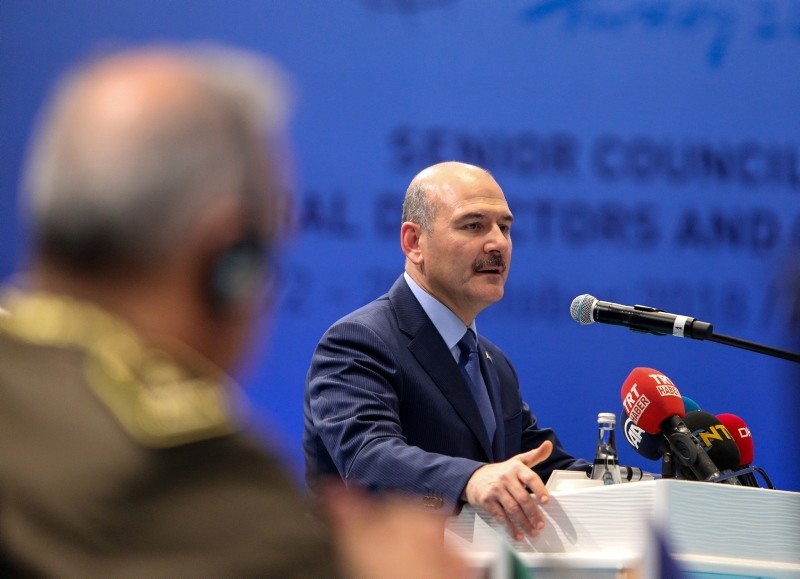 Daesh terrorists tried to build planes in northern Syria where the Turkish army carried out cross-border operations to rid the region of terrorists, the Turkish interior minister said Tuesday.

"They have even tried to build planes," he said.

Operation Euphrates Shield, which began on Aug. 24, 2016 and ended in March 2017, was launched to clear the border of the threat of terrorism from Daesh and the People's Protection Units (YPG) along the border in the northern Syrian regions of Jarablus, Al-Rai, Al-Bab, and Azaz with the Free Syrian Army, backed by Turkish artillery and air cover. Turkey and the FSA managed to liberate more than 2,000 square kilometers of territory with the operation.

Speaking at the meeting of the International Association of Gendarmeries and Police Forces with Military Statues (FIEP), hosted by the Gendarmerie General Command at the Regnum Carya Hotel in Belek, Antalya. Soylu said we are living in a century full of contradictions in terms of global security.

Soylu said since 2011, 916 EU citizens were arrested while trying to cross Turkey's border to join Daesh.

He said 9,394 EU citizens were put on the list of foreign people banned from crossing Turkey's borders, to prevent them from joining the terror group.

Reminding that the PKK and its subbranches make about 1.5 billion dollars annually from drug trafficking, Soylu said "They're collecting tributes in Europe. There are training camps in EU countries and they recruit new members from these camps. They also do arms and human trafficking. Again, a contradiction here is that there are about 11,000 kilometers between the U.S. and Syria, but it is known that the U.S. has 22 military bases in Syria. It keeps sending weapons and aircraft to the YPG which is the Syrian arm of the PKK."

More than 300 people lost their lives in Daesh-claimed attacks in Turkey, where the terror organization has targeted civilians in suicide bombings, rocket and gun attacks in recent years.

Soylu said some caves that the Turkish army captured from PKK terrorists in Turkey are 3,000 meters high, while some have three floors and are 100 meters deep.