Alliance with YPG tactical and temporary, senior US official says 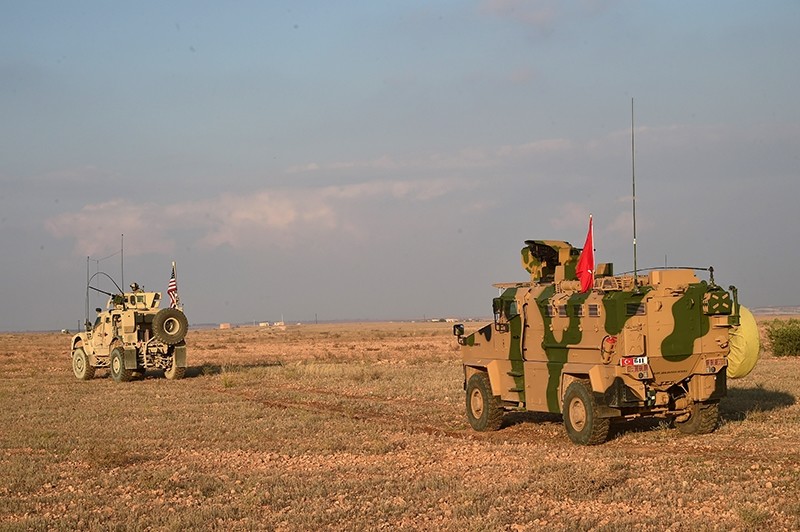 "There is a fundamental difference between our relations with YPG; temporary, tactical and transactional in the context of defeating (Daesh), and our relationship with Turkey, a NATO ally, a partnership of decades. Both countries have made all obligations to each other under NATO treaty. There is no comparison at all," the official said.

He added that the U.S. government "will never support, never be a part of and never allow a statelet within Syria."

The official rejected the claims suggesting that a divergence has been going on with the Turkey strategy of the U.S. military factions of the U.S. Central Command (CENTCOM), which is in charge of military actions in the Middle East, and the European Command (EUCOM) that is responsible for military relations with Turkey.

"The constitution makes it clear that the president of U.S. decides most big decisions on foreign policy and national security. It is important what President (Donald) Trump says as commander in chief," he said.

Answering a question regarding U.S. response to a possible Turkish offensive east of Euphrates, the U.S. official said that Turkey has serious security concerns that are taken seriously by the U.S. on the issue; however, he added that "these security concerns can be addressed by means other than a military offensive which would probably be better for a long-term solution in Syria."

President Recep Tayyip Erdoğan and other Turkish officials have been signaling a likely expansion of Turkey's military campaign into the much larger YPG territory east of the Euphrates if the threat continues.

Stressing that the two NATO allies so far have "achieved a lot" in northern Syria's Manbij by implementing a road map, the U.S. official said that the initial coordinated individual patrols and current joint patrols are significant since the process is "difficult in a very dangerous part of the world."

The Manbij deal reached between Turkey and the U.S. in June foresaw the withdrawal of the YPG from the northern Syrian city and establishing stability in the region through joint Turkish-U.S. patrols.

"We have been conducting joint patrols with the U.S. in line with the Manbij road map. The ultimate aim of this road map is to completely eliminate the YPG from the region and handing over control of the region to its real owners," Foreign Minister Mevlüt Çavuşoğlu also said yesterday.

Çavuşoğlu underscored that Ankara's efforts to clear the region from terrorists will continue.

The U.S. official, meanwhile, also said that after the release of Pastor Andrew Brunson, the two countries now will look into other "hard issues" waiting to be resolved.

"We are starting together with our colleagues, presidencies and foreign ministries tackling and trying to find a way forward on these big issues as shared interests compel our countries to further strengthen relations after challenging months," he said.

Brunson, the evangelical American pastor, was found guilty of espionage-related crimes by a court last month, but was released for time served under house arrest. However, two major disagreements for Ankara, namely the extradition of Fetullah Gülen, the U.S.-based leader of the Gülenist Terror Group (FETÖ) and the U.S.' support given to the YPG linger as significant obstacles in normalizing ties.

The official said that Turkey is a sovereign country that can make its own decisions regarding its defense needs, however, stressed that the U.S. thinks Turkey's purchase of S-400 from Russia is "ill-advised," due to three problems: "NATO compatibility, threats to F-35 aircraft and potential invocation of the Countering America's Adversaries Through Sanctions Act (CAATSA)."

"We believe that the S-400 purchase ought to be reconsidered by the Turkish government," he said.

The U.S. law known as Countering America's Adversaries Through Sanctions Act, or CAATSA, aims to further punish Russia for annexation control of Ukraine's Crimea peninsula in 2014.

As Turkey's previous efforts to purchase defense systems from its allies had not yielded results, Turkey agreed to buy two S-400s from Russia in a deal worth over $2 billion in September. Officials from Ankara have repeatedly said that the purchase of the S-400 systems was prompted to fulfill the country's security needs.

Stressing that U.S. welcomes and supports every iniative that would bring stability and contribute to peace efforts in Syria, the U.S. official said that the Idlib deal reached between Turkey and Russia was a "fantastic achievement."

"Some people have suggested that the U.S. is unhappy because Turkey managed to come to an agreement with Russia on Idlib. Nothing can be further from truth," he said, adding that the agreement prevented a humanitarian disaster in the region.

"We supported it and we continue to support as much as we can," he said.

Ankara and Moscow reached an agreement in Sochi on Sept. 17 to establish a buffer zone cleared of heavy weapons and radical groups, and to preserve a cease-fire to avoid a humanitarian catastrophe.

Prior to the agreement, Syria's Bashar Assad regime was preparing for a full-scale attack on the city, the last stronghold of the opposition. It was feared that the full-scale attack would cause a humanitarian catastrophe in Idlib, which is home to about 3.5 million Syrians, including the internally displaced.