YPG is PKK's Syrian wing but US fails to recognize as such, Syria envoy Jeffrey says 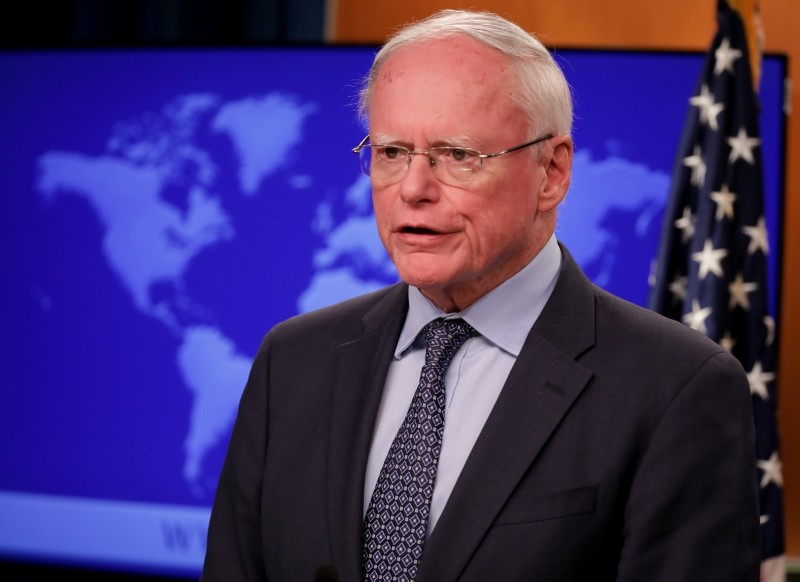 The People's Protection Units (YPG) is the Syrian wing of PKK terrorist group but the U.S. does not recognize it as such, U.S. Special Representative for Syria James Jeffrey said Thursday.

Jeffrey spoke at a panel at the Defense One Summit, which brings top military, foreign policy and intelligence leaders to Washington to discuss American security throughout the world.

Jeffrey said U.S. operations in Syria could not be done without the "active participation, coordination, and cooperation of Turkey."

The U.S. is not able to function in the northeastern region of Syria while fighting Daesh forces at the same time, and to do both a local partner is needed, he said.

"That local partner since 2014 has been the Democratic Union Party (PYD) which is the Syrian offshoot of PKK but we have not designated it as a terrorist organization which we did with the PKK," Jeffrey said.

"Our mission to bring peace to Syria would already be over if we turned our backs on Syrian Democratic Forces (SDF), which evolved from the PYD, which is in its own sense an offshoot of the PKK," Jeffrey said at the summit.

Washington's conflicting approach to the PKK has come under the spotlight in recent weeks, as it continues to provide military support to the YPG but ramped up efforts to apprehend lead PKK terrorists. Last week, the U.S. Department of State's Rewards for Justice program authorized up to $5 million for information on PKK's acting leader Murat Karayılan, $4 million for Cemil Bayık and $3 million for Duran Kalkan.

After the announcement of the rewards on Nov. 6, Jeffrey said the U.S. does not recognize the YPG as a terrorist organization. He said that while the U.S. "understood" Turkey's security concerns regarding the ties between the PKK and YPG, it does not consider YPG to be a terrorist group.

Jeffrey, the United States ambassador to Turkey from 2008 to 2010, was appointed and sworn in as Washington's Special Representative for Syria Engagement in August.

Turkey has repeatedly criticized the U.S. for delivering weapons and military equipment to PKK's Syrian affiliate the YPG and its decision to perform joint patrols with the terrorist group. To date the U.S. has sent a total of 4,700 heavy weapons and armored vehicles to the YPG.