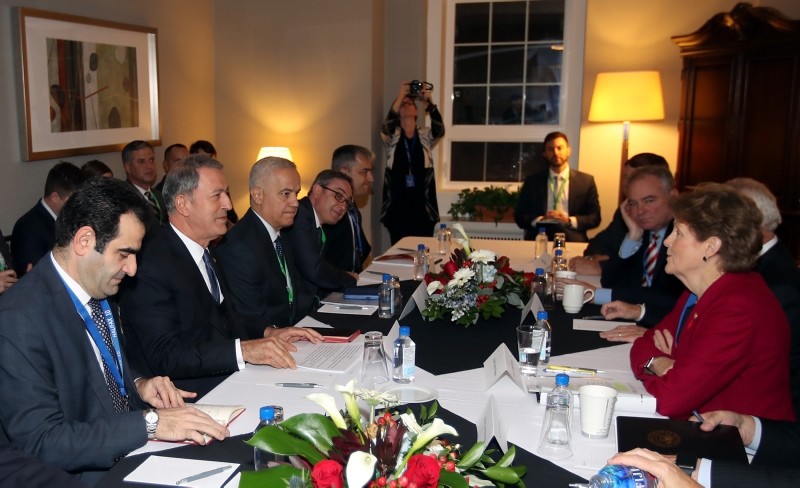 Akar met with the senators on the sidelines of the Halifax International Security Forum in Canada.

Speaking about photos showing U.S. military officials with YPG terrorists, the defense minister said the Turkish public was disturbed by the images.

"The image of America and the American army in the eyes of our people was damaged. We expect the U.S. to cut off its cooperation with the YPG terrorist organization, as promised. It's unacceptable for the U.S. to deliver trucks and planes [full] of arms and ammunition to the YPG terror group even though Daesh has been largely neutralized," Akar stressed.

He reiterated that Turkey would never allow the creation of a terror corridor on its southern border with Syria.

Akar also called on the U.S. to extradite the members and leader of the Gülenist Terror Group (FETÖ) residing in the country to Turkey.

Relations between Turkey and the U.S. went into a tailspin due to the latter's military support for the Syrian Democratic Forces (SDF), which is dominated by the YPG, under the pretext of fighting Daesh.

Turkey has strongly objected to the YPG's efforts to form a state-like structure in Syria. Ankara has been warning the U.S. that supporting a terror group would mean sowing the seeds of instability for Syria's future.

The extradition of the FETÖ leader Fethullah Gülen, who orchestrated the July 15 coup attempt in 2016, where 251 people died and nearly 2,200 were injured, has been high on the agenda in Turkish-U.S. relations for years.

Ankara also accuses the FETÖ of being behind a long-running campaign to overthrow the state through the infiltration of Turkish institutions, particularly the military, police and judiciary.

Turkey has shared all its documents on FETÖ with teams from the U.S. Department of State and the FBI, which launched an investigation into the group. Gülen, who arrived in the U.S. in 1999, currently resides in a luxurious retreat in Saylorsburg, Pennsylvania.

Turkey pressed the U.S. for his extradition after the coup attempt, sending hundreds of folders full of evidence implicating Gülen and FETÖ in the coup attempt. The issue was raised in bilateral meetings between Turkish and American officials, in phone calls, letters and other exchanges, yet, they failed to reach any conclusion.