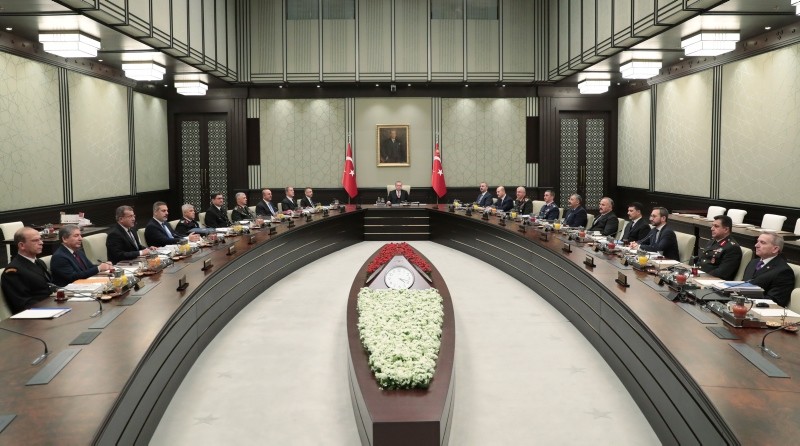 Turkey's top security body, the National Security Council (MGK), underscored Tuesday that Turkey will not allow fait accompli in Syria, and said that some countries' stances on the PKK and its offshoots were hurting the global fight against terrorism.

A written statement released after the MGK meeting said the biggest threat to a political solution in Syria was terrorist elements on the east of Euphrates, namely the PKK's Syrian wing, the People's Protection Units (YPG). Turkey will not hesitate to exercise its right of self defense in the face of such threats against its national security, the statement reiterated, adding that the country will continue its operations against terrorists in Iraq.

Calling on all parties to establish a Syria constitutional committee under the United Nation's observation as soon as possible for a permanent solution to achieve peace, the statement underlined that Turkey will not turn a blind eye to the PKK/YPG changing the demographic structure of the region through persecution and forced migration.

Reminding that some countries still failed to list the PKK/YPG and the Gülenist Terror Group (FETÖ) as terror groups, which hurts global counterterrorism efforts, the council stressed that Turkey's fight against terrorism to protect itself from threats along its southern borders would continue undimmed.

The council was implicitly referring to the United States, which supports the YPG militarily as it partners against Daesh in Syria. Washington's Syria policy has angered Ankara as the latter sees no difference between the PKK, a group listed on terror lists by the U.S. and EU, and its Syrian branch, the YPG.

Turkey has said it will clear its borders from all terror groups, including Daesh and the YPG. Yet, the U.S. partnership with the group in some areas has complicated the possibility of cross-border operations by Turkey as the troops of the two NATO allies can come into armed confrontation.

In June, Turkey and the U.S. agreed to work on the withdrawal of the YPG from Manbij, a YPG-held region in northern Syria. The aim with the Manbij deal is to ensure security and stability in the province through elimination of YPG terrorists and ultimately handing the administration of the province to a body consisting of locals. Yet, the progress of the deal, Ankara says, has been "sluggish" and slower than initially planned, due to what has been described as ingenuity of the U.S. over the plan.