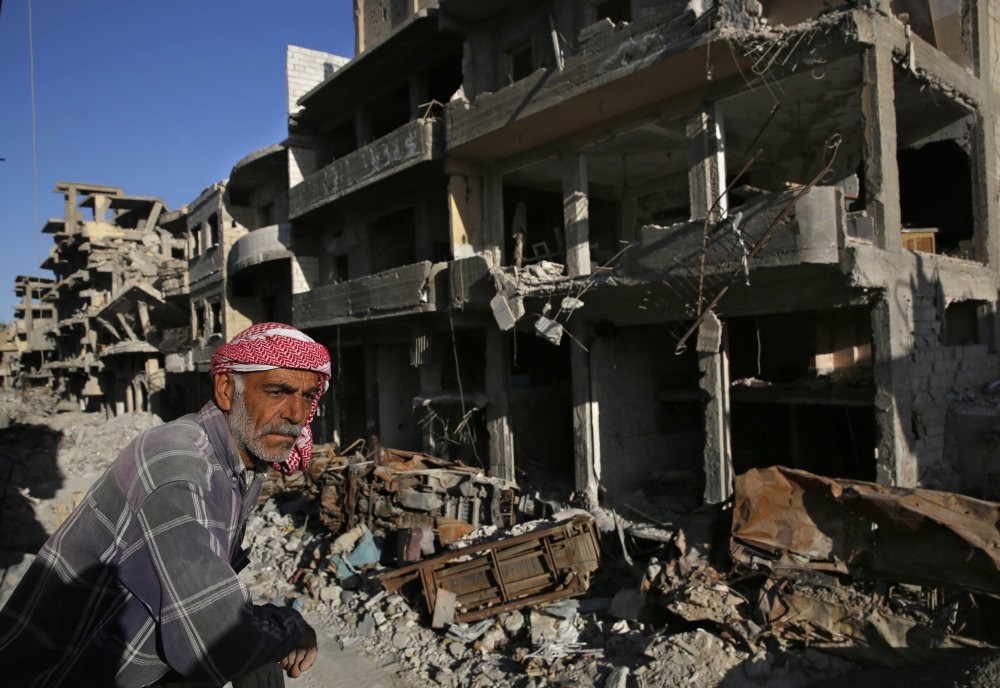 A Syrian man stands between buildings destroyed last summer in fighting between the U.S.-backed YPG and Daesh terrorists, in Raqqa, Syria, April 5.
by Daily Sabah Dec 06, 2018 12:00 am

Human rights violations by YPG terrorists in northern Syria were once again revealed, as a U.N. report showed that there has been an increase in deliberate attacks on education and health facilities

A United Nations report has documented the human rights violations of the U.S.-backed People's Protection Units (YPG), the PKK terrorist group's Syria affiliate, in areas under its control in northern Syria.

The report by the U.N. Office for the Coordination of Humanitarian Affairs (OCHO) reported an increase in deliberate disruptions of education and health services in northern Syria's Raqqa and Hasakah provinces.

On Oct. 25 a number of health and nutrition clinics treating cases of severe and acute malnutrition in Raqqa city were also closed, according to the U.N. report.

Aside from disrupting the health services, it was reported that the group has been also targeting Syrians' right to education.

"School attendance and access to education have been affected in Hasakah following the reported decision by the KSA to halt all buses transporting school children to and from KSA areas to attend GoS schools that are teaching the Syrian government curriculum," the report revealed.

Highlighting the impact of the restrictions, the report added: "In Hasakah, more than 380 schools are affected by the restrictions, preventing almost 60,000 students from accessing their schools on a daily basis. Similarly, in Qamishli, the attendance rate has dropped by 45 percent."

The information provided in the report shows that the YPG disrupts education and attempts to indoctrinate school children by imposing its own curriculum.

The YPG has been described as the "most effective partner" in the fight against Daesh in Syria by the U.S. administration, despite its organic links with the PKK terrorist group. It was also stressed in U.N. Secretary-General Antonio Guterres' report on Syria on Nov. 21 that "the KSA prohibited education in Arabic at more than 250 government schools in late September and onward."

With an aim of getting access to education in Arabic some families move or send their children to other areas, the report added, showing that many civilians feel pressure to leave their homes.

Turkey has long-criticized the U.S. support for the YPG and stressed that the group would create grave security threats and further complicate the situation on the ground. As the U.S. considers the group as its "ally," Turkey has been pointing out that the fight against Daesh cannot be used as a convenient alibi for the ongoing partnership.

A number of U.N. reports have proved Turkey's concerns over local people. While the YPG has some plans aiming to undermine the territorial integrity of Syria, it has also been preventing the access of civilians to their basic rights.

In order to prevent further human suffering and enable the return of Syrians to their homes, Turkey has been calling on the U.S. to stop shoring up the YPG as it would be impossible to restore peace in Syria with the presence of the terrorist groups.

in Syria's AfrinThe YPG controls a large swathe of territory in northeastern Syria, which Turkey sees as a threat to its national security. This January, Turkey launched Operation Olive Branch to clear the YPG from the northwestern province of Afrin. On March 18, Turkish and the Free Syrian Army (FSA) forces liberated the town of Afrin, on the 58th day of the operation.

Since then, Turkey has been playing a pivotal role in bringing daily life back to normal in regions previously held by the YPG.

In a recent move, the Turkish Health Ministry opened a new health center in Afrin.

"It's hard to reach the Afrin city center when you are sick. With this new health center, it is easy for locals to get treatment in their own town. We thank the Turkish authorities and especially the Health Ministry," Saad Ahmed, the director of the center, told Anadolu Agency (AA).

The health center was established in the town of Raju and offers internal medicine, dentistry, women's and pediatric outpatient clinics, as well as a blood test laboratory and a pharmacy. Turkey's Health Ministry also set up a mobile hospital and two mobile health service vehicles in Afrin. Additionally, the health center Turkey set up in the rural town of Jinderes treats up to 70 patients a day.