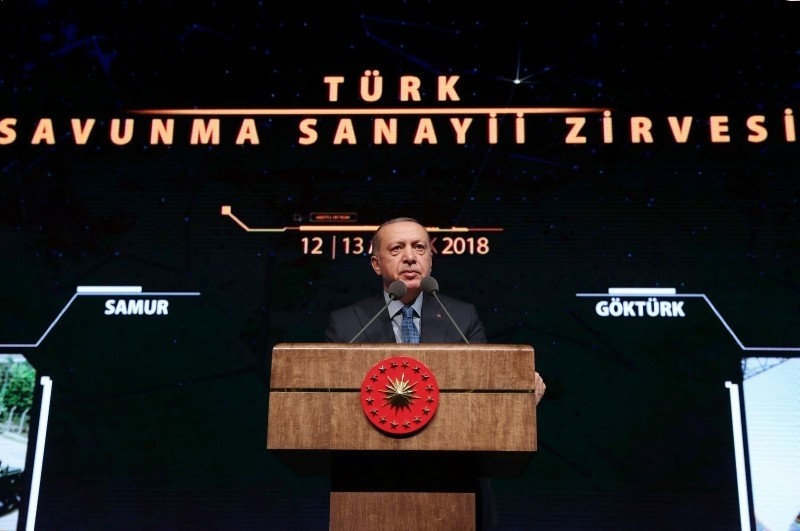 Turkey will carry out a military operation east of the Euphrates River in Syria in a couple of days, and this step will facilitate the country's political solution, President Recep Tayyip Erdoğan said Wednesday.

Speaking at the Turkish Defense Industry Summit held at the Beştepe Presidential Palace Complex in capital Ankara, Erdoğan said it is time to realize Turkey's decision to dissolve terrorism groupings east of the Euphrates River, referring to areas controlled by the People's Protection Units (YPG) terror group in northern and eastern Syria.

"We have completed our preparations," Erdoğan said.

Erdoğan said the operation will target terrorist organizations operating in Syria, adding: "Our targets will never be U.S. soldiers."

Later on Wednesday Defense Minister Hukusi Akar said that allowing a "terror corridor" in any way in the south of Turkey, including the east of the Euphrates River, is out of the question.

"Training terrorists is unacceptable," he added commenting on U.S.' support for the YPG.

Turkey shares a 711-kilometer (442-mile) border with Syria and considers the presence of the YPG, the Syrian affiliate of the PKK terrorist group and the dominating force in the U.S.-backed Syrian Democratic Forces (SDF), on its southern border a grave threat to its national security.

Almost all the territory in the east of the Euphrates, comprising some one-third of the territory of Syria, except for the Assad regime-controlled area near the eastern city of Deir el-Zour and the Daesh-held area near the Iraqi border, is controlled by the SDF. The SDF also controls the districts of Manbij and Tabqah on the right bank of the river.

The YPG has direct control in northern Syrian border towns of Ayn al-Arab (Kobani), Tel Abyad, Ras al-Ain (Sari Kani), Al-Darbasiyah, Amuda and Al-Malikiyah. In northeastern cities of Qamishli and Hassakah, the Assad regime has symbolic control in limited areas in city centers, in addition to controlling the airport in Qamishli and a military base in Hassakah.

Criticizing Washington for supporting the YPG, Erdoğan said the U.S. strengthened its ties with the terrorist organization instead of severing it.

He added that the U.S. repeatedly ignored evidence presented by Turkey to recognize YPG as a terrorist organization and instead chose to call the militants "strategic partners."

Radar and observation posts installed by the U.S. in Syria were there to protect terrorists from Turkey, where it should have been the opposite, the president said.

"U.S. soldiers have been placed among PKK terrorists in case Turkey uses its legitimate right of self-defense or intervention," he added.

"They (the U.S.) said they did not supply heavy weapons when we objected to them arming YPG. They said they will collect the current arms after the threat of Daesh is eliminated. Who are you deceiving?" Erdoğan said.

"They are talking about a 150 square-kilometer zone where they (Daesh) are active. If it is about this zone, Turkey is ready to immediately eliminate any Daesh presence in the area," he said.

"Although Manbij is made up 80-85 percent of Arabs, there are terror organizations there and they are not being honest. They still can't remove terrorists from there. Then we will do it," Erdoğan said, referring to U.S. pledges to remove YPG from the northern Syrian district.

A possible mission east of the Euphrates, which Turkey's leadership has been suggesting for months, would follow two successful cross-border Turkish operations into Syria -- Operation Euphrates Shield launched in August 2016 and Operation Olive Branch launched in January 2018, which were both meant to eradicate the presence of YPG and Daesh terrorists near Turkey's borders.