Turkey to take every precaution to protect its borders, Presidential Spokesperson Kalın says 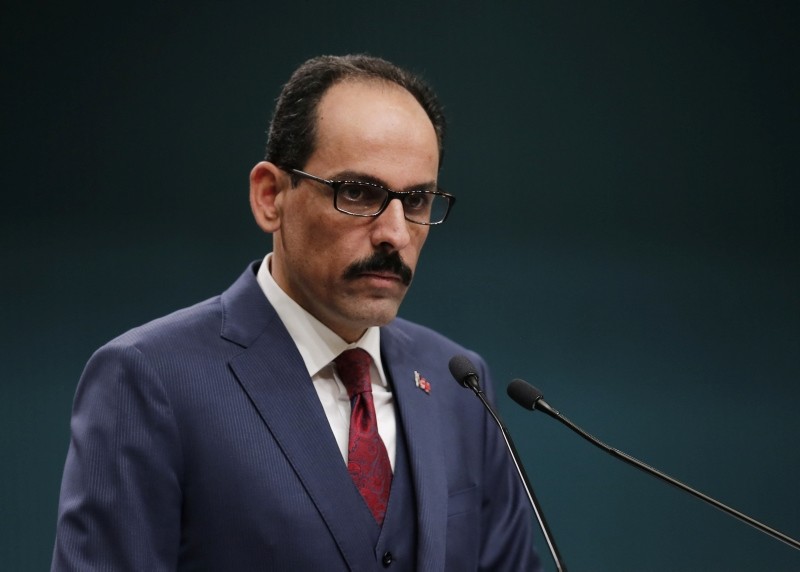 Turkey will take every precaution to protect its borders, Presidential Spokesperson Ibrahim Kalın said Saturday, adding that this was not only for Turkey's interests but also for Syria's territorial integrity.

Speaking at the 18th Doha Forum gathered under the tagline "Diplomacy, Dialogue, Diversity," Kalın talked about Turkey's planned counterterrorism operation in the east of the Euphrates River to clear terrorist elements from the region.

"Our president was very clear about it. We cannot tolerate the formation of small states or state-like structures to be ruled by the PKK or its affiliates in Syria. This poses a direct threat to our national security," Kalın said.

Emphasizing that the United States was in Syria for three main reasons, Kalın said: "The first one is the continuous struggle against Daesh, the second is territorial integrity based on stability and trust, and the third one is to expel Iranian forces out of Syria, which is now being openly expressed by the U.S."

He acknowledged that Turkey understood — or at least tried to understand — the U.S.' reasoning for the first two, but said the third made no sense as a goal and the U.S. needed a lot of luck to achieve it.

The spokesman said the U.S.' presence in Syria went beyond its purpose and became "another theater for proxy games in the region."

Pointing out that the Syrian issue has already moved away from its essence and turned into a power play, Kalın underlined the need for leadership to solve this situation, which threatens everyone.

He also criticized Muslim countries for a "lack of leadership" and said they were silent just like European countries, especially when it came to Syrian and Palestinian issues.

Evaluating Europe's approach to the Syrian crisis, Kalın said: "Where is Europe and Europeans amidst this fire in Syria? We understand that the U.S. has a great economy and an army, and therefore is naturally involved in the game. This is understandable. But there are many things we can do (with Europe)."

Kalın said that migration was just one dimension of the Syrian crisis and added, "there are other dimensions, such as a political solution or political process, towards which Europe is hesitantly approaching."

Turkey hosts 3.5 million Syrian refugees, more than any other country in the world. The country has spent more than $32 billion from its own national resources for helping and sheltering refugees since the beginning of the Syrian civil war.

In regards to the summit held on Oct.27 in Istanbul, which brought together Russian, Turkish, German and French leaders, Kalın said that the summit resulted in two important consequences. He said that one of them was the ongoing ceasefire agreement in Idlib and the other was the subject of the constitutional committee. He said that they had "made progress on these issues, but they "still have a lot to do in Syria."

In the Oct.27 summit, the four leaders highlighted the need to create conditions throughout the country for the safe and voluntary return of refugees and internally displaced persons to their original places of residence in Syria, and that the returnees need security from armed conflict, political persecution or arbitrary arrests.

The Istanbul talks also discussed extending the ceasefire around Idlib, where aid groups have warned that a military offensive could spark one of the worst humanitarian disasters of the seven-year war.

Moscow and Ankara agreed on Sept. 17 to create a 15 to 20-kilometer-wide demilitarized zone ringing Idlib as Turkey sought to avoid an attack by Daesh or the PKK's Syrian wing the People's Protection Units (YPG) leading to a further influx of people across its border.