Spox for US coalition in Syria retweets fake news about Turkey, later backpedals 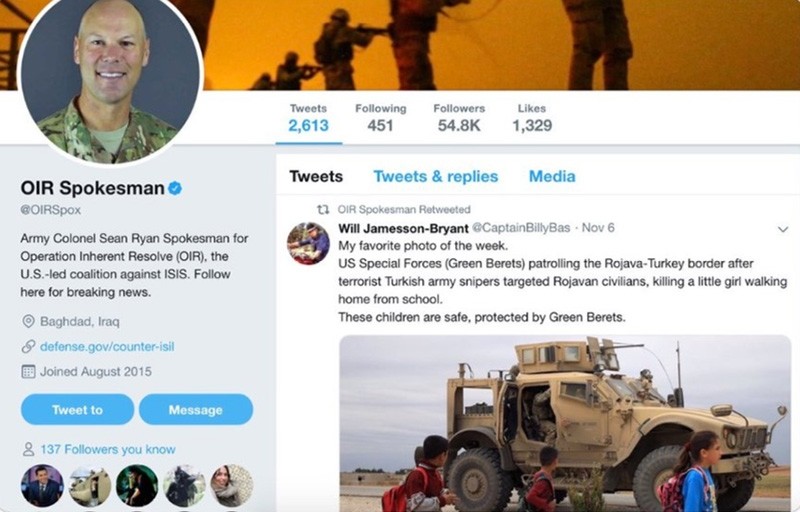 The spokesman for the United States-led coalition forces in Syria retweeted a post on his Twitter account Sunday that accused Turkish army snipers of targeting civilians in People's Protection Units (YPG)-held territory, but later deleted the tweet, apologizing for spreading "propaganda."

The Rojava is a region in northern Syria which is claimed by the PKK's Syrian affiliate the YPG. The photo, which showed U.S. Special Forces alongside Syrian children, was unrelated to the caption.

Ropcke, an editor at Germany-based BILD newspaper, was blocked by Ryan after sharing the screenshot, stirring further indignation from the journalist, who replied: "You can not be serious. @CENTCOM, do journalists get blocked now for doing their job?!"

"Earlier I tweeted based off the photo of Marines protecting kids, and did not read the full message. This was my mistake and quickly deleted although someone screenshot this tweet and spread negative messages. My fault- stop spreading propaganda," he wrote.

The coalition spokesman also issued an apology on Twitter for retweeting the scandalous post and spreading false information about Turkey.

In my official capacity, I accidentally shared content that was insulting to our Coalition partner Turkey, a key partner in the mission to defeat ISIS. I meant no disrespect. We have a duty to mutual security, and we are committed to defeating ISIS. Please accept my apology.

The U.S.-led coalition has partnered with the terrorist YPG in Syria under the pretext of fighting against Daesh, despite Turkey's outcry and warnings that partnering with one terrorist group to defeat another cannot achieve the desired outcomes.

Turkey has carried out two successful cross-border operations into Syria — Operation Euphrates Shield launched in August 2016 and Operation Olive Branch launched in January 2018 — both meant to eradicate the presence of YPG and Daesh terrorists near Turkey's borders.