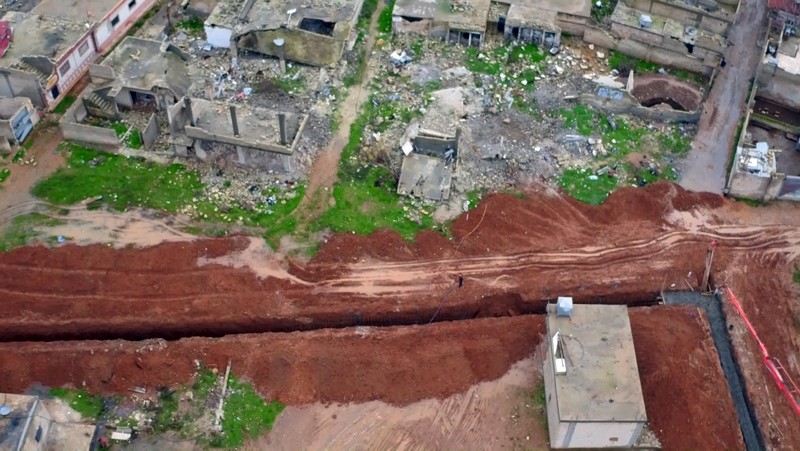 Ahead of a possible Turkish counterterrorism operation into Syria, drone footage has captured the People's Protection Units (YPG) terrorists digging trenches and tunnels in the northern Syrian city of Ayn al-Arab, near Turkey's border.

Video obtained by Anadolu Agency showed the terrorists in the city — right across the border from Suruç, in the southeastern Turkish province of Şanlıurfa — dug trenches and tunnels, presumably to hinder Turkish armored vehicles from crossing the border for an operation east of the Euphrates River.

In order to connect their positions near the border, the terrorists are using cement to fortify tunnels and trenches spanning two meters tall by one meter wide (6.5 feet tall, 3.2 feet wide).

The footage also showed buildings thought to be local police stations with photos of terrorists on their walls.

Turkey's Operation Olive Branch, launched this January in northwestern Afrin, Syria to clear the area of terrorists, similarly encountered many trenches dug by the YPG, the Syrian branch of the PKK terror group.

A mission east of the Euphrates, which Turkey's leadership has been suggesting for months, would follow two successful cross-border Turkish operations into Syria since 2016, both meant to eradicate the presence of YPG/PKK and Daesh terrorists near Turkey's borders.

In its more than 30-year terror campaign against Turkey, the PKK has been responsible for the deaths of some 40,000 people, including women and children. The YPG is its Syrian branch.

Turkey's leadership has said a cross-border operation against terrorists could come within days.