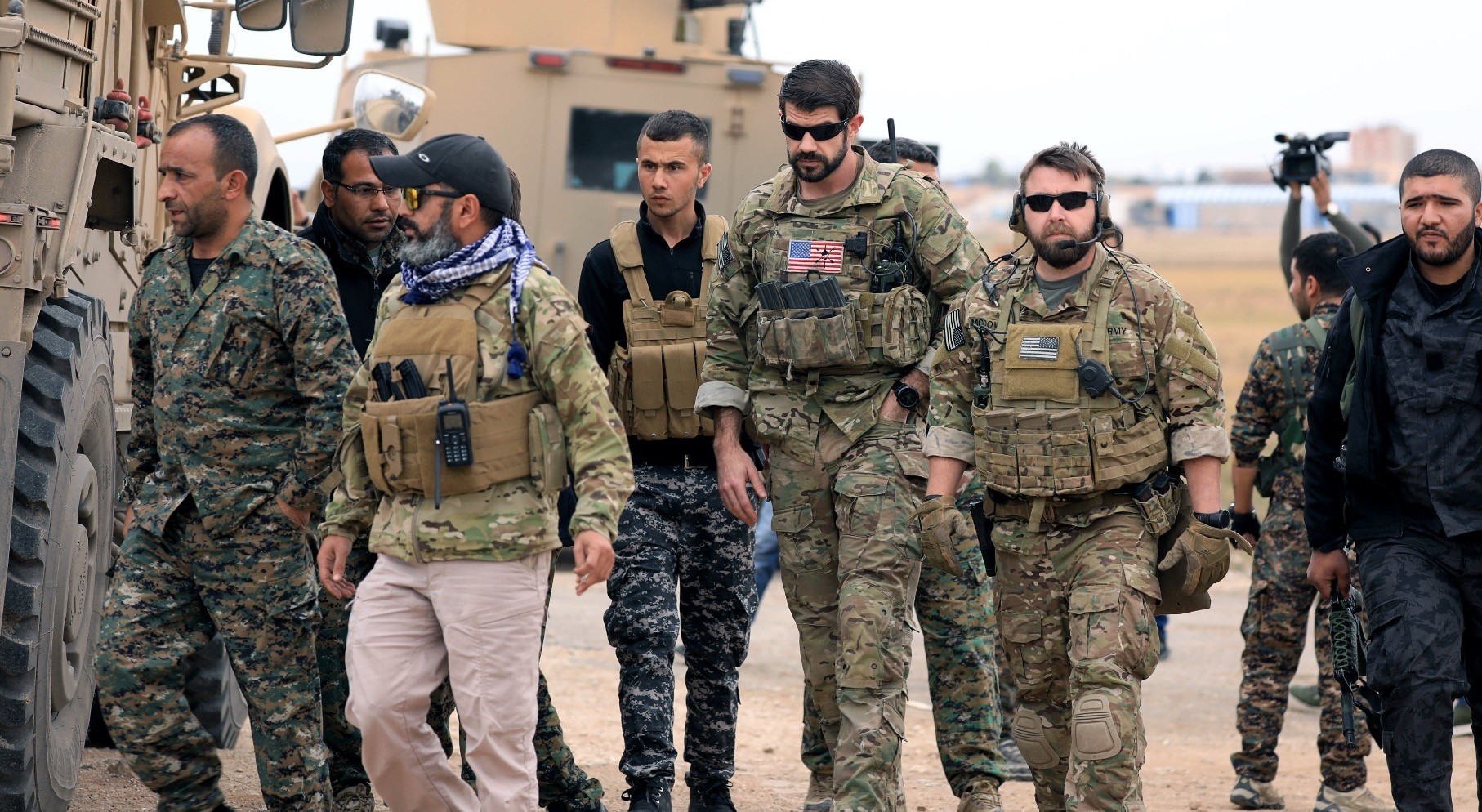 The U.S.' unexpected decision to leave Syria has brought up many critical questions, including what will happen to the weapons that Washington provided to the YPG which the terrorist group has not hesitated in using against Turkey and Turkey-backed forces

With the U.S. decision to withdraw from war-torn Syria, the future of the heavy weapons provided to the PKK-linked People's Protection Units (YPG) by Washington emerges as one of the most critical issues that needs to be addressed. The terrorist group's presence on the Turkish border poses grave security threats to the country and needs to be resolved urgently. During the fight against Daesh, the U.S. opted for partnering with the YPG despite its NATO ally's security concerns, and provided truckloads of weapons to the terrorist group.

Currently, the U.S. is preparing to leave Syria, in an abrupt decision undertaken recently, and the question of what will happen to the weapons given to the terrorist group in a highly unstable region like Syria hangs in the air since attacks by the YPG, using these weapons, continue. In the latest move, the YPG targeted the Turkish-backed Free Syrian Army (FSA) on Thursday in the Kaljibrin village of the northwestern Syrian town of Azaz with American-made anti-tank TOW missiles. The terrorists targeted the patrolling FSA troops early in the morning, which caused the death of two fighters. On Wednesday, the YPG also targeted the same region; no casualties or injuries were reported from that attack.

The presence of these weapons has caused worry in Ankara, threatening the stability of northern Syrian areas that were liberated from Daesh during Operation Euphrates Shield and Operation Olive Branch. There are also other serious possible threats to Turkey with officials concerned about the possibility of the transfer of these U.S.-made weapons to southeast Turkey through the border controlled by the YPG to be used against the Turkish army by PKK terrorists.

So far, many incidents have proven the validity of these concerns as an ample number of U.S.-made weapons have been found in PKK caves and military depots during Turkish military operations in the southeast.

Also, reports had suggested that arms and ammunition given to the YPG were smuggled across Turkish borders, through the Amanos Mountains near Turkey's southern province of Hatay, aiming to help the PKK's domestic terrorism activities, specifically against tourism near the Aegean region. The Turkish army cut off this road for delivery after Operation Olive Branch in Afrin last year.

The delivery of arms and equipment to the YPG, which is still poisoning bilateral relations between the two NATO allies, began in 2014 and intensified in subsequent years.

Some 22,000 truckloads of arms and ammunition have been given to the YPG so far. Some of the arms include cruise missiles, Anti-Tank Guided Missiles (ATGM) and shoulder-launched surface to air missiles (MANPADS).

The U.S. promised Turkey that it would take back the weapons following the defeat of Daesh. Yet, Ankara doubts that Washington will keep its word since Daesh has been substantially defeated and the U.S. has not halted its steadfast support of the YPG terrorist group. Taking back weapons from the YPG and the fight against terrorist groups, including Daesh, were also discussed in a recent meeting last week between Turkish National Defense Minister Gen. Hulusi Akar and U.S. Chairman of the Joint Chiefs of Staff Gen. Joseph Dunford with the attendance of Turkish Chief of General Staff Gen. Yaşar Güler in the capital Ankara.

The Ministry of National Defense said in a statement that during the meeting Akar reiterated that Turkey was determined to take any measures needed for its border security and regional stability. Akar also said the Turkish Armed Forces are fighting against the PKK/YPG and Daesh, not its Kurdish brothers in the region. He added that Turkey has always respected the territorial integrity of both Syria and Iraq.

As the U.S. has been long dragging its feet in allaying the concerns of Turkey to take back the weapons from the YPG, Ankara strongly stressed that it will not remain unfazed in the face of serious terror threats. Prior to the U.S.' decision to withdraw its 2,000 troops from Syria, Ankara was very close to launching an operation east of the Euphrates. President Recep Tayyip Erdoğan underlined during that time that Turkey would be careful to avoid harming U.S. soldiers on the ground, conveying Turkey's determination to target the terrorist group.

When U.S. President Donald Trump firstly announced the decision to withdraw, he signaled an immediate withdrawal. However, now he has pointed to a slower process. The shifting remarks and mixed messages have raised questions on whether the U.S. has a plan in place. The elusive plan of U.S. withdrawal might further complicate developments in Syria.

The announcement by Trump has also faced criticism in the U.S. The timing of the withdrawal was considered as "wrong" by some arguing that Daesh might come back. The move also prompted U.S. Defense Secretary James Mattis to quit.

Russia: U.S. wants to stay in Syria despite withdrawal decision

There have been many different reactions to the U.S.' mixed moves. Accordingly, Russia's Foreign Ministry said on Friday it had the impression that the U.S. wanted to stay in Syria despite the announcement of the withdrawal of U.S. troops, the RIA news agency reported.

The comments coming from the U.S. that it would like to continue protecting the YPG after its pullout have raised eyebrows in Ankara.

Prior to his visit to Ankara last week, Trump's National Security Adviser John Bolton said last Sunday that the U.S. military withdrawal from northeastern Syria is conditioned on defeating the remnants of the Daesh terrorist group, and on Turkey assuring the safety of fighters allied with the United States – the Syrian Democratic Forces (SDF), which is dominated by YPG terrorists. Similar remarks also come from the U.S. warning Turkey to not "slaughter" Kurds. The comments faced backlash from Ankara stressing that the YPG is a terrorist organization and does not represent the Kurds. Bolton also said on Friday that Turkey-U.S. military talks will continue next week. He added that he hopes the talks with Turkey "will produce results that are acceptable to both sides." Bolton underscored that it is "critically important that we do not allow the situation in Syria to deteriorate."

Moreover, a delegation led by Turkish Deputy Foreign Minister Sedat Önal will travel to the U.S. on Feb. 5. to discuss the withdrawal.

Meanwhile, the U.S.-led coalition against Daesh began the process of withdrawing from Syria, a spokesman said on Friday, indicating the start of a U.S. pullout. Yet, the officials avoided giving specifics about the U.S.' plan.

Col. Sean Ryan said that the coalition "has begun the process of our deliberate withdrawal from Syria. Out of concern for operational security, we will not discuss specific timelines, locations or troop movements."

In the face of Washington's unclear objectives and its withdrawal plan, Ankara has stressed that an operation east of the Euphrates does not depend on the withdrawal of the U.S. High-level officials stressed that Ankara would not shy away from taking steps to ensure its national security. "We have Manbij, and the east of the Euphrates ahead. The necessary planning was made regarding this. Our preparation continues intensely," Akar said on Friday while inspecting troops near the border with Syria. "We have no problems with our Kurdish brothers, Arab brothers in Syria, Turkmens or other ethnic and religious groups. Our only targets are terrorists Daesh and YPG," he added.