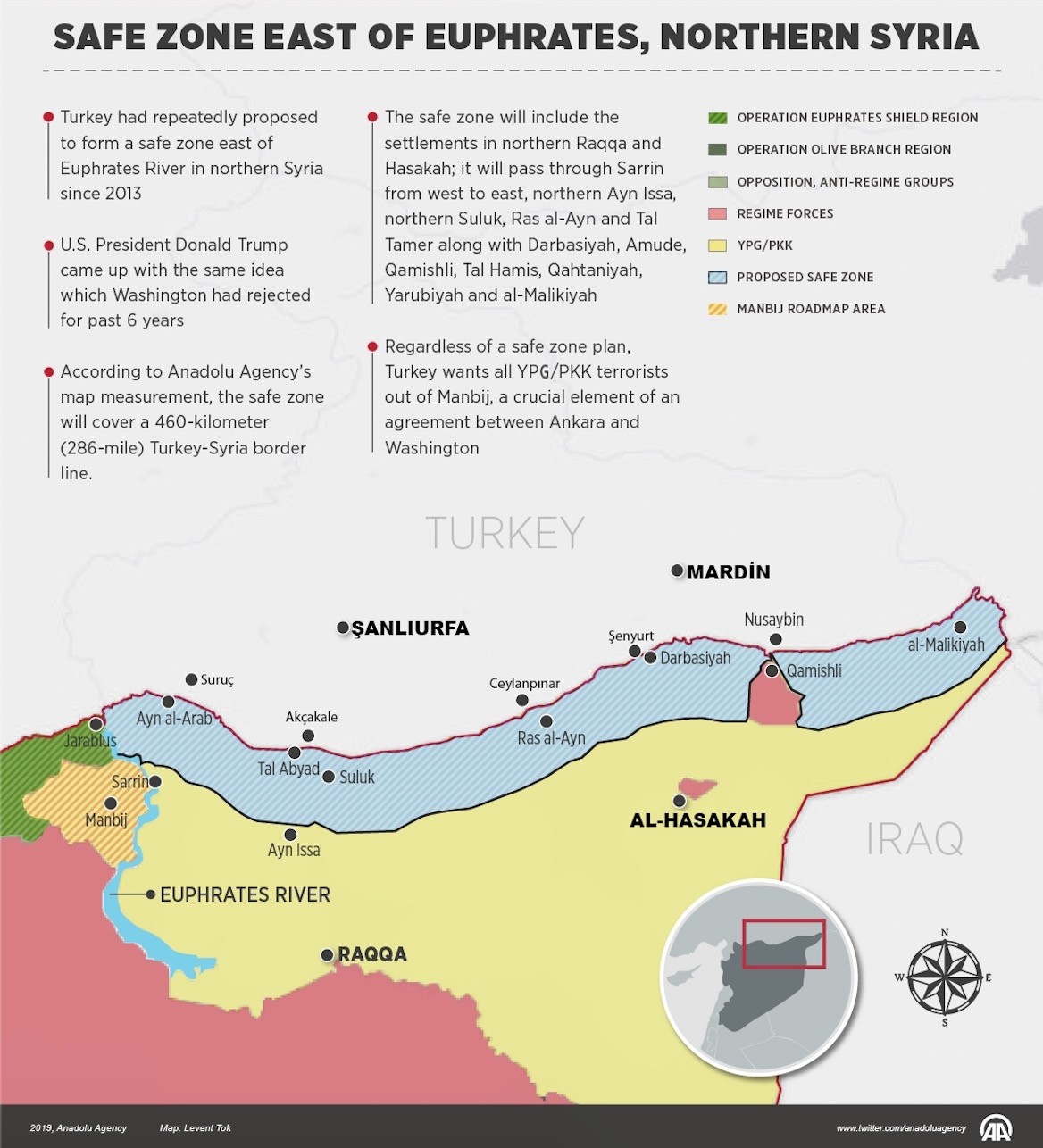 Ankara considers establishing a safe zone a temporary solution that will enable the country to have border security until the civil war in Syria comes to an end. However, the existence of YPG terrorists in the area continues to pose a security threat

Turkey has presented a positive stance toward the implementation of its previously suggested idea to set up a safe zone in northern Syria along its border to alleviate the refugee burden until the war ends. Yet, the presence of the PKK-linked People's Protection Units (YPG) and Daesh along Turkey's southern borders still remains a threat for Ankara, which the country aims to eliminate completely in order to assure its border security. A diplomatic source, speaking on the condition of anonymity, told Daily Sabah that the safe zone move would provide a temporary solution to the current problems until the seven-year conflict ends.

By establishing the safe zone, Turkey's aims to prevent damage caused by Syrian regime attacks, to avoid terrorist organizations from flourishing in the country, provide a safe area for Syrian people and stem migration. President Recep Tayyip Erdoğan said on Tuesday that Turkey and the U.S.- led coalition will set up a safe zone, which Turkey has long called on its allies to support. "The safe zone issue, including one along Turkey's borders to be formed by us, is something I have discussed since the Obama era. It was reiterated by him [Donald Trump] as 20 miles [32.19 kilometers]," he said and added that the zone could be extended further. 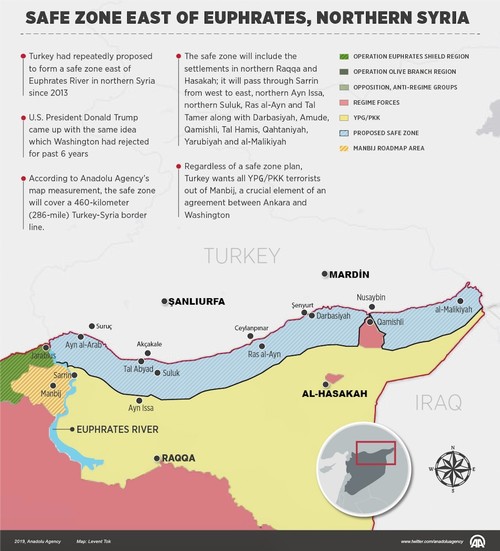 Ankara has been suggesting since 2012 that a safe zone of 30-40 kilometers could be established between the northern Syrian towns of Jarablus and al-Rai.

Erdoğan noted that he had previously mentioned this issue to other leaders, including German Chancellor Angela Merkel and Saudi Crown Prince Mohammed bin Salman at the G20 summit in China; he even proposed providing financial support for the initiative but did not follow up.

"Ankara would substantially welcome the step if the safe zone is set up by Turkey. In such a scenario, the safe zone would enable Turkey to clear its borders from the YPG, ensuring its border security," Oytun Orhan, an expert on Syria, told Daily Sabah yesterday.

He added that Trump might have other plans such as placing Arab elements from the Syrian Democratic Forces (SDF) to the region.

The SDF is an umbrella organization dominated by the YPG, and supported by Washington under the pretext of fighting against Daesh, something that has infuriated by Ankara.

Referring to the statements coming from the U.S. that it will continue to protect its "ally," the YPG, in the fight against Daesh while withdrawing, the source stressed that the U.S. does not know how to separate itself from the group following close partnership with the terror group. It added that when Trump first announced that the country was to leave Syria and he had a phone talk with Erdoğan, the dialogue between the countries was good and Trump highlighted that Turkey can deal with what remained of Daesh. As the decision to leave faced backlash, Trump started to change his rhetoric putting emphasis on protecting the YPG.

On Dec. 19, last year, U.S. President Donald Trump said he was withdrawing all 2,000 American troops from Syria in a sudden announcement. Some U.S. officials later called on the U.S. president to halt the withdrawal, demanding Washington to protect "Kurds" from Turkey. Following the U.S.' decision to leave Syria, Turkey has been discussing the future steps and impact of the decision with the U.S. officials. Presidential Spokesperson İbrahim Kalın said the U.S. commission, which visited the country last week, presented Turkey a document that unofficially confirmed Washington's decision to withdraw from the region.

According to Kalın, Turkey offered a similar document in return which outlined the importance of not giving any territory to the YPG and Daesh terrorist groups.

Yet, statements from Trump and high level U.S. officials that the U.S. will continue to protect the YPG in Syria have increased tensions between the two countries.

Orhan underlined that if the safe zone is established in line with Turkey's approach it would strengthen the country's hand against the YPG. However, he said that establishing the safe zone does not mean that Turkey will end its pressure on the YPG.

"It will be a safe zone not just for Turkey but also for migrants," Kalın said on Tuesday and stressed that "Turkey will continue to be a player both in the field and at the table by utilizing politics, diplomacy and power."

The details of the safe zone were also expected to be ironed out in a meeting between Chief of General Staff Yaşar Güler and his American counterpart Gen. Joseph Dunford in Brussels yesterday. Commenting on the safe zone plan, Russian Foreign Minister Sergey Lavrov said yesterday that all parties, including Turkey and other neighbors, will have their security and interest observed.

Turkey has long been stressing that the YPG which has organic links to the PKK terrorist organization has been posing threats to the national security of the country. Ankara also warned its NATO ally, the U.S. against cooperating with a terror group and providing heavy arms to them.

The source said that when the U.S. envoy to Syria James Jeffrey, who has comprehensive information on the country as a former ambassador, visited Ankara in December to have talks with Turkish officials he was open to discuss the ways to implement the Manbij road map in the east of the Euphrates as well.

Turkey and the U.S. agreed on a deal in June which focuses on the withdrawal of the YPG from the Manbij district that is located west of the Euphrates River in order to establish stability in the region.

The source added that Jeffrey explained that the YPG would be used in the fight against Daesh but they are ready to listen to Turkey for the ways to replace the group.

In relation to the future efforts for fighting the remaining elements of Daesh, the source said that what is important is that by pursuing comprehensive policies and providing the necessary conditions for people to live in, the resurgence of the group would be prevented. The source highlighted that Turkey would play an essential role during this process. The source gave the example of al-Bab and stressed that Turkey has exerted all efforts and increased the quality of life in the region.

Al-Bab, an important crossroads and settlement in northeastern Aleppo province, was liberated from the cruel four-year-long period of Daesh rule on Feb. 22, 2017, by the Turkish Armed Forces (TSK) and Free Syrian Army (FSA) fighters as part of Operation Euphrates Shield launched on Aug. 24, 2016.

Since the liberation of the province, al-Bab's population has jumped from 130,000 to 300,000, with its economy and services benefiting from the safe environment.