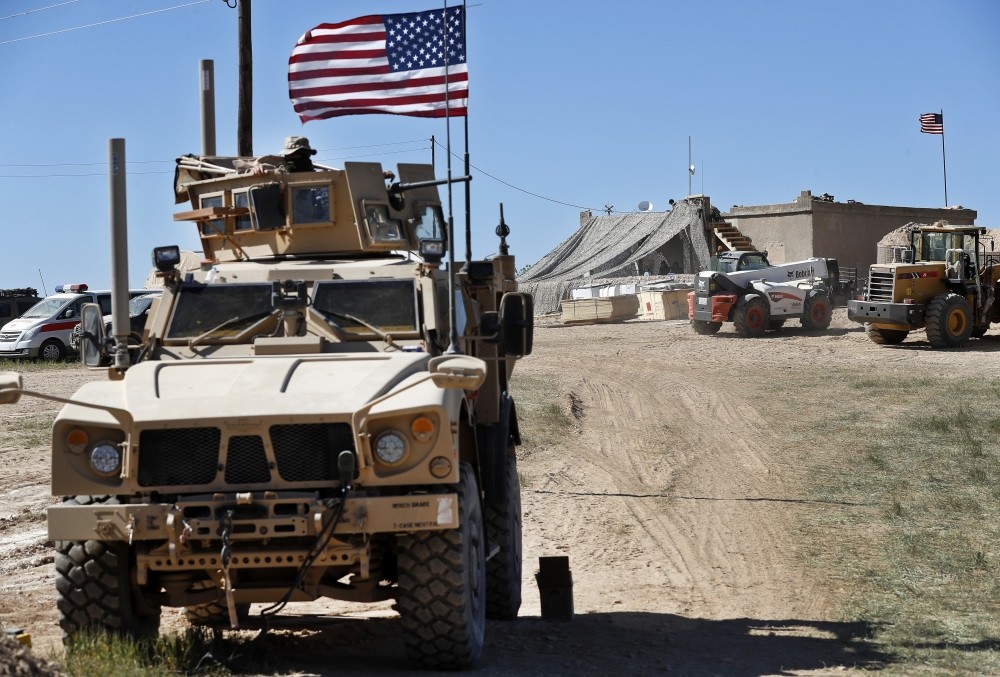 Ankara offered its condolences and its willingness to cooperate with the U.S. in the fight against terrorism after a Daesh attack killed four U.S. troops in Manbij, Syria

After a terror attack in Manbij which killed four U.S. soldiers, Turkey stressed it stands by its NATO ally the U.S. and strongly condemns the incident. Stating the significance of a firm stance against terrorism, Turkey expects such terror attacks to not affect Washington's decision to withdraw from Syria and its stance on terrorism. "As a country which has suffered a lot from terrorism, we are against all kinds of terrorism; we stand resolute in fighting against terrorism," Foreign Minister Mevlüt Çavuşoğlu told reporters at a joint press conference Thursday with his Macedonian counterpart, Nikola Dimitrov.

Çavuşoğlu stated that Turkey condemned the attack in northwestern Syria's Manbij in a statement, adding that Ankara would provide support in shedding light on the incident to light if Washington requests. An attack claimed by Daesh on Wednesday in Manbij killed 4 U.S. troops, stirring controversy about the U.S.' policy in Syria and the details of the withdrawal within the country. In the U.S., the timing and the scale of the withdrawal may be highly debated in the upcoming days with the impact of the attack. Prompted by the recent attack there will be arguments that Daesh remains a significant threat.

Commenting on the attack, Hüsamettin İnaç, the chairman of Dumlupınar University's Department of Political Science and International Relations, said that "this would create an atmosphere that can be used as an excuse to prevent the withdrawal."

The U.S.' decision to withdraw its 2,000 troops from Syria was announced by the U.S. President Donald Trump on Dec. 19. Trump previously stressed that Syria was all about death and sand and said that the U.S. will withdraw since Daesh is defeated. He also highlighted that the remaining Daesh terrorists can be defeated by neighboring countries particularly Turkey.

Regarding the debates over Daesh, both Turkish and U.S. officials have repeatedly stressed that Daesh has been substantially defeated and the remainder of the terrorist group will continue to be targeted.

In relation to the issue, U.S. Vice President Mike Pence said on Wednesday that "The caliphate has crumbled and ISIS has been defeated," using an acronym for Daesh.

Regardless of possible debates, Ankara would expect the U.S. to implement its decision to withdraw as it is determined to fight against terrorists.

"President Recep Tayyip Erdoğan and Trump have reached an agreement. Trump announced that the troops will come back home. There might be some attempts to claim that Daesh is resurging, yet the statement of Pence and the high level officials need to be taken into consideration," Mesut Hakkı Caşın, a professor and head of the International Relations Department at İstinye University in Istanbul told Daily Sabah.

He added that Trump would stick to the withdrawal plan as it would strengthen his position in the elections.

Playing a pivotal role in the fight against Daesh, Turkey has long been calling on its ally the U.S. to increase cooperation with legitimate actors to conduct a war against Daesh. Yet, in its fight against Daesh, the U.S. opted for using a terrorist group, the PKK-affiliated People's Protection Units (YPG), which caused furious backlash from Turkey.

The cooperation between the YPG and the U.S. has created grave threats against Turkey's national security. Since the YPG has been using the fight against Daesh as a veil to pave way for its plans to establish a quasi-state in northern Syria, Turkey has warned the U.S. to end the partnership with the terrorist group in order to avoid putting the stability and peace in the region at stake.

Attaching great significance to regional peace and security, Turkey highlighted that it will target all terrorist groups in Syria. Taking concrete steps against Daesh, Turkey has eliminated over 3,000 Daesh terrorists. In 2016, Turkey launched Operation Euphrates Shield and cleared northern Syria of Daesh terrorists. Since then, Turkish authorities have launched many initiatives in fields of education, infrastructure, health and security to bring daily life back to normal in the town and the broader Euphrates Shield region, consisting of northern Syrian towns.

"Turkey's main objective in Syria is to protect the territorial integrity of Syria, therefore the terrorist groups including Daesh, YPG, PKK are all targets for it," Caşın underlined.

He added that in line with the decisions taken, "the U.S. would provide logistics support to Turkey to eliminate Daesh terrorists."

Aside from its efforts to eliminate terror groups in the neighboring country and providing security, Turkey has been also exerting efforts to alleviate the suffering of people. Turkey expects to set up a safe zone along its borders to enable the return of Syrians to their homes.

Touching on the safe zone plan, Çavuşoğlu said that "A safe zone in northern Syria is important for stability, the return home of Syrians including our Kurdish brothers, and the fight against terrorism."

"The first talk about that was held between our Chief of General Staff Yaşar Güler and [his U.S. counterpart] Gen. Joseph Dunford in Brussels," Çavuşoğlu added stressing that the plan was first brought up by Erdoğan at the beginning of the Syria crisis.

When Erdoğan visited the U.S. nearly six years ago, in May 2013, he suggested the idea proposing a three-stage plan that included a no-fly zone, a safe zone for civilians, and launching a joint land operation along with coalition forces.

As Trump brought up the plan again, Ankara started discussing the details for establishing the zone. Çavuşoğlu said it should emerge at upcoming talks whether Turkish and U.S. views are overlapping or not about the ideas of a Syrian safe zone. The proposed safe zone in northern Syria is considered important both for the country's stability and displaced Syrians' return home.