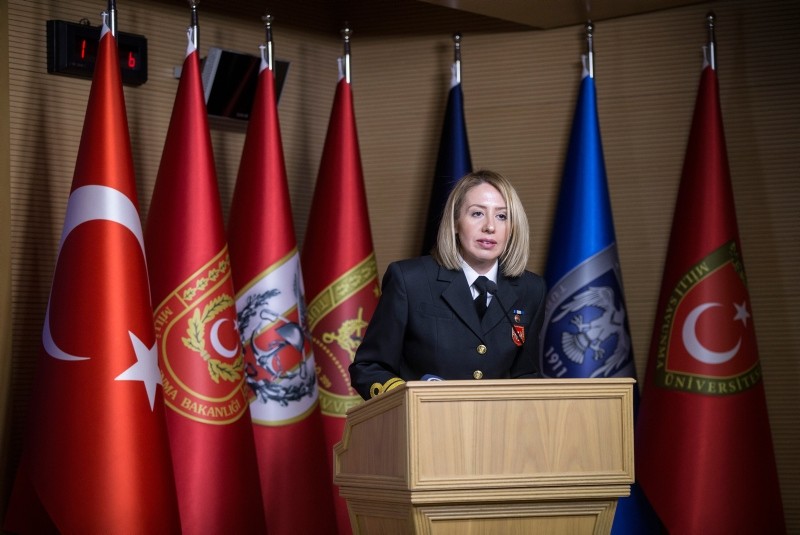 In the face of increased regional and global terror threats, Turkey is determined to maintain efforts in the fight against the terrorist groups PKK, its Syrian offshoot People's Protection Unit (YPG), Daesh and the Gülenist Terror Group (FETÖ), the Turkish National Defense Ministry said Saturday.

"In order to ensure national security, Turkey is resolutely continuing its fight against terrorists particularly PKK, YPG, FETÖ and Daesh, which have been targeting the security of 81 million citizens," Lieutenant Commander Nadide Şebnem Aktop told reporters in a meeting at the ministry.

Stressing that Ankara has been launching comprehensive operations both in Turkey and across the border to eliminate terrorists, Aktop said that "since last year 2,442 PKK terrorists, including 74 so-called leaders in Turkey and northern Iraq were eliminated and 1,387 military depots, caves and shelters were destroyed."

With the aim to target the financial sources of the terrorist groups, 20 tons of narcotics, 26 tons of fuel and 4,000 animals were seized, Aktop said.

She highlighted that with its cross border operation in Syria, Turkey has significantly contributed to the efforts to provide peace and stability in the neighboring country. Accordingly, Aktop said that "contrary to the baseless and unfair reports or comments aiming to create a wrong perception, Operation Euphrates Shield has shown that Turkey is the only country which genuinely fought against Daesh." With Turkey's efforts, 293,424 Syrians voluntarily returned to this region, she noted.

The Operation Euphrates Shield was launched to eliminate the Daesh terror threat and secure Turkey's borders on Aug. 24, 2016, a month after the heinous coup attempt in July 15. The operation was successfully ended on March 29, 2017.

Touching on another operation conducted by Turkey, Aktop said that the number of terrorists that have been eliminated has reached 4,608 after Operation Olive Branch.

Turkish forces have been continuing their efforts in Syria's Idlib in line with the agreement reached by Turkey and Russia on Sept. 17, 2018 in Sochi summit.

"Our efforts to implement the deal have been successfully continuing despite the provocations in the region," Aktop said and stressed that the deal has prevented humanitarian disasters and prevented disrupting the political process.

Aktop was referring to the recent clashes in Idlib which have been raising concerns for the stability of the region.

Clashes between the al-Qaida linked Hayat Tahrir al-Sham (HTS) terrorist group and the moderate National Liberation Front (NLF), which is backed by the Turkish-assisted Free Syrian Army (FSA), in Syria's northwestern province of Idlib ended after the two groups agreed on a ceasefire on Jan. 10. The clashes started in late December in Aleppo and intensified in the last two days, spreading to Idlib's north and southeast, including the western countryside of Aleppo province, the town of Atmeh, the tent area in Idlib and the northwestern Hama province.

In line with the Manbij agreement signed by Turkey and the U.S., the joint coordinated patrols were started on Nov. 1, 2018. The two countries have conducted nine patrols until the second week of January, Aktop highlighted.

Turkey's objective with the Manbij deal consists of the withdrawal of the YPG, the collection of the weapons given to the terrorists and the return of people to their homes.

Aktop added that Turkish and U.S troops were trained in Gaziantep province in three groups as well.

PKK not representative of Kurdish people

Turkey's only target is the terrorist groups, not the Kurdish people with whom we "share the same geography," Aktop said.

Accordingly, Aktop said that the efforts for preparations have been completed and the Turkish Armed Forces are ready to conduct any mission whenever it is given.

As the U.S. and Turkey plan to set up a safe zone along Turkey's borders, Ankara prioritizes that the safe zone should be free of terrorists, a military source said.

Ankara has been suggesting since 2012 that a safe zone of 30-40 kilometers could be established between the northern Syrian towns of Jarablus and al-Rai. Currently, negotiations are ongoing with U.S. officials to extend the safe zone from Euphrates River to the Iraqi border since the area is controlled by the PKK-affiliated People's Protection Forces (YPG) terrorists.

Air defense system not a choice, but a necessity

During the meeting, Aktop also touched upon the ongoing efforts to acquire and develop an air defense system amid air and missile threats directed at Turkey. "With the procurement of S-400 systems from the Russian Federation, our country will gain an important air defense ability," she said, adding that efforts to develop air defense systems domestically through technology transfer and production also continue in partnership with the Italian-French joint venture of EUROSAM.

"Talks regarding the U.S. offer on Patriot's also continue on the side of the Presidency of Defense Industry," she added.

The first batch of two F-35's was also delivered on June 21, 2018, and the training of pilots and maintenance are ongoing in Arizona, U.S., Aktop said. "With the two planes that will be delivered in March 2019, the four planes will remain in the U.S. by the end of 2020 for training," she said, adding the fifth and sixth planes to be delivered will be transferred to the airbase in eastern Turkey's Malatya on Nov. 30, 2019.