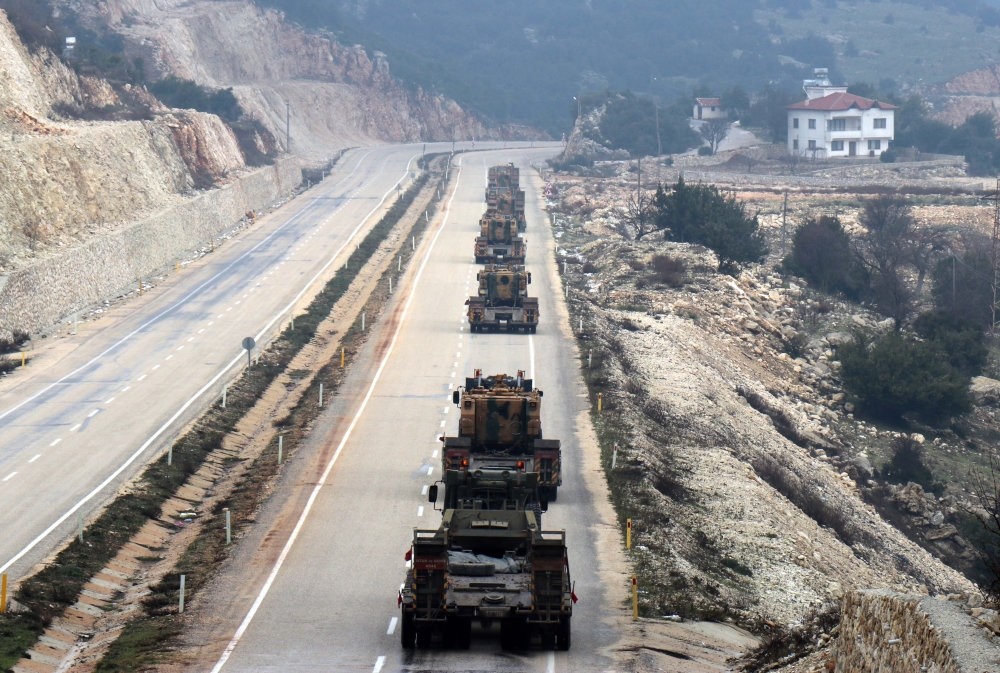 Preparations for an offensive in northern Syria continue with the deployment of military troops to the border.
by Daily Sabah Jan 19, 2019 12:00 am

Ankara reiterated its resolve to continue fighting terrorism along its borders until terrorist groups threatening national security are eradicated. "We won't stop until we drain the terrorist swamp next door. We won't rest until justice is served," Presidential Communications Director Fahrettin Altun posted on Twitter on Friday.

Stressing the significant threats against the country, Altun said, "Terrorists have killed more than 2,000 innocent people in Turkey since 2015. Many of those attacks were planned in northern Syria. The Turkish people [have] suffered more than their fair share."

The civil war in Syria has created various challenges for countries in the region. Aside from facing terror threats from groups that gained a significant foothold in Syria by benefiting from the power vacuum, Turkey has also assumed the greatest responsibility in hosting refugees and addressing their basic needs. The situation on the ground in Syria has enabled various terrorist groups to grow and spread across the country.

Turkey has assiduously underlined that it will not allow terrorist groups to target Turkey from Syria and will take necessary measures to support the territorial integrity of Syria.

Pointing to various terrorist groups' attacks against Turkey, Altun also shared a video showing scenes from some of the over 100 terror attacks that Turkey has suffered since July 2015 by the PKK, its Syrian affiliate the People's Protection Unit (YPG), Daesh and the Gülenist Terror Group (FETÖ). Over 2,000 innocent Turkish people were killed in these attacks.

The YPG which took control of vast swathes of Syrian soil under the cover of fighting against Daesh has been posing grave security threats to Turkey. Even though Turkey has strongly warned its ally the U.S. that the YPG's aim is not to defeat Daesh but gain a foothold in Syria, the U.S. provided heavy arms support to the group calling it an effective partner in the fight against Daesh.

In mid-December, President Recep Tayyip Erdoğan announced an imminent Turkish operation east of the Euphrates River in northern Syria, saying Turkey had begun taking action for an offensive against the PKK terrorist group's Syrian affiliate. Since then, preparations for an offensive have continued with the constant deployment of military troops to the border.

US withdrawal not a 'betrayal'

Commenting on U.S. ties with the YPG, Robert Ford, the former American ambassador to Syria said Thursday in a conference call with the Woodrow Wilson International Center for Scholars, that he did not see the U.S. withdrawal from Syria as a betrayal of their alliance with the YPG, considering the nature of their relationship.

"We did not have a formal relationship with the Syrian Kurdish fighters on the ground, the YPG militia connected to the PKK." Ford underlined, implying that they were only cooperating to defeat Daesh which was temporary and tactical.

Ford added the YPG were fighting for their own interest and not as a favor to the U.S. Ford, who served as Syrian ambassador from 2010 to 2014, defined the U.S.-YPG relationship as a "tactical alliance."

While strongly rejecting the presence of the YPG along its borders, Turkey stressed that it will not shy away from taking steps to eradicate the terrorist group.

In relation to the recent developments in Syria, Foreign Ministry spokesman Hami Aksoy highlighted yesterday that Ankara will not tolerate any circumstances that pose a threat to Turkey's national security.

"Clearing Manbij from the YPG is an issue of national security for us," Aksoy said.

Commenting on the recent attack in Manbij which killed 4 U.S. troops, Aksoy stated that the attack "indicated the significance of fully implementing the Manbij road map and clearing the region from terrorists." He underscored that the objective of the Manbij deal is the withdrawal of the YPG in order for the people of Manbij to control the city. Aksoy also added that the regime's attempts of provocations in Manbij should not be allowed.

In relation to the U.S.' decision to withdraw from Syria, Aksoy said that "The U.S. withdrawal process from Syria should not serve the divisive agenda of the terrorist YPG. There should not be a fait accompli on the ground." U.S. President Donald Trump announced earlier this month that he was ordering the withdrawal of the roughly 2,000 troops from war-torn Syria.

Touching on Turkey and the U.S.' plan to set up a safe zone along Turkey's border, Aksoy stated that Ankara welcomes this decision and the sides are expected to iron out the details.

Aksoy highlighted that Foreign Minister Mevlüt Çavuşoğlu will visit the U.S. on Feb. 6 to attend the Foreign ministers meeting of the anti-Daesh coalition, also Deputy Foreign Minister Sedat Önal will visit Washington on Feb. 5 and these issues will be discussed during the meetings. He added that President Recep Tayyip Erdoğan will also discuss the safe zone with Russian President Vladimir Putin in his upcoming visit to Russia on Jan. 23.

Meanwhile, YPG terrorists opened fire on Turkish troops in Afrin yesterday. Following the incident, the Defense Ministry said in a tweet that the troops also responded by firing warning shots.