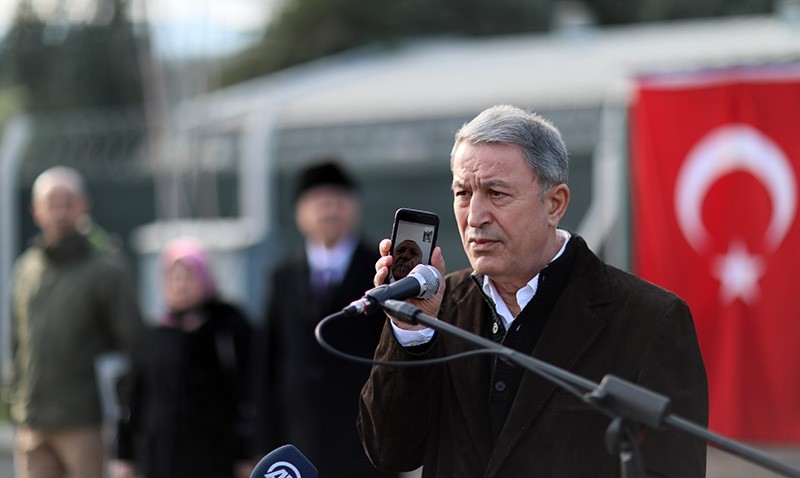 Marking the anniversary of the start of Turkey's Operation Olive Branch, President Recep Tayyip Erdoğan on Sunday spoke with Defense Minister Hulusi Akar and a commando team involved in the counter-terror operation.

In a video call to the soldiers at their base in Turkey's southern Hatay province, Erdoğan stressed that Turkey's fight against terrorism will continue without hesitation in Syria's Afrin, Jarablus and Al-Bab regions.

"The fight in Afrin will hold an unforgettable place in our memories," he said, referring to the site of Operation Olive Branch.

Speaking about Sunday's terrorist attack in Afrin, northern Syria, Erdoğan said that: "Terrorist attacks in Afrin will never deter us from our fight there."

Two civilians were killed and eight injured in Sunday's bomb attack on a bus in Afrin.

The bombing, falling on the anniversary of the start of Operation Olive Branch, is believed to be the work of the PKK's Syrian affiliate People's Protection Units (YPG).

"We buried all terrorist groups in the ground in Afrin and Jarablus, Syria and in the Mount Cudi area in southeast Turkey," Erdoğan said.

"You can't divide us. We will scratch out the eyes of anyone with designs on our territories," he warned.

Defense Minister Akar said Sunday that the current issues in Syria are in Manbij and the area east of the Euphrates. "Our plans, preparations and logistics are completed," he said, referring to an imminent Turkish operation to oust terrorists from the region.

"Operations in Manbij, Syria, and east of the Euphrates will start when the right time comes," Akar said.

Turkish Chief of General Staff Gen. Gen. Yaşar Güler and other commanders accompanied Akar on the visit to a commando team.

"We have no problems with our Kurdish brothers or Arab brothers in Syria and Iraq. Our only targets are the terrorist Daesh and PKK/YPG," added Akar.

"We will never allow a terrorist state or terror corridor at our southern border. We will continue to fight with terrorists until they all neutralized," he said.

Since 2016, Turkey's Euphrates Shield and Olive Branch operations in northwestern Syria have liberated the region of YPG and Daesh terrorists, making it possible for Syrians who fled violence there to return home.

Since being rooted out from Afrin by Olive Branch, the YPG has targeted civilians and security forces with terrorist attacks.

In its more than 30-year terror campaign against Turkey, the PKK -- recognized as a terrorist group by Turkey, the U.S., and the EU -- has been responsible for the deaths of some 40,000 people.