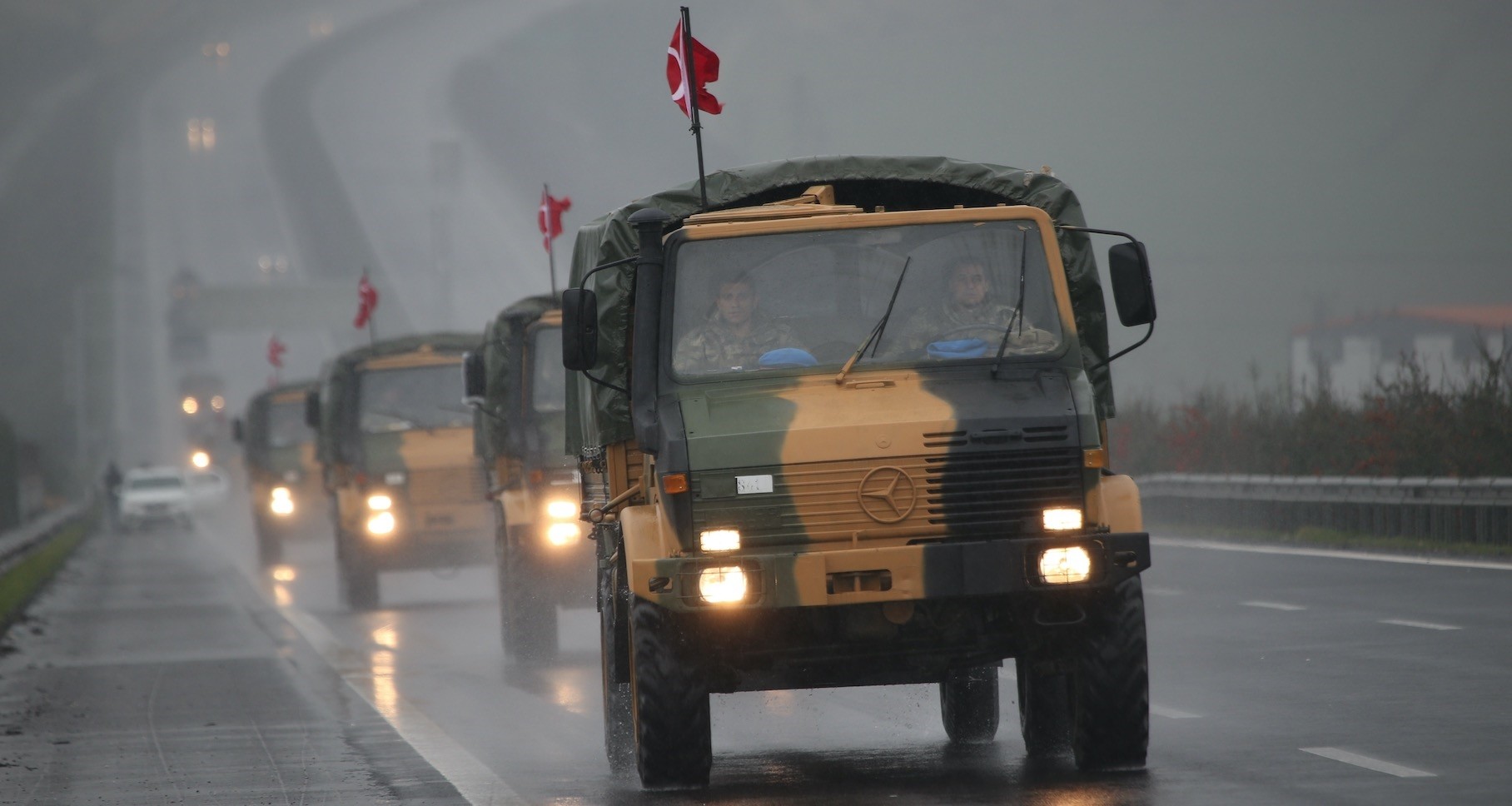 Ensuring Turkey's control over a safe zone in northern Syria is important for eliminating terror and establishing the safe return of refugees, Ankara says

Proposing a plan to set up a safe zone along its border with Syria, Turkey believes that the region should be completely cleared from terrorist groups and the area should be under its control in order to establish a sustainable safe zone. "When we say safe zone we are referring to a region under Turkey's control. Otherwise, it would not mean a safe zone for Turkey," Turkey's Vice President Fuat Oktay said yesterday in a televised interview, in relation to establishing a 32-kilometer safe zone in northern Syria, suggested by Turkey several times in the past. President Recep Tayyip Erdoğan announced last week that Turkey will set up a safe zone with the assistance of coalition partners.

Erdoğan has been suggesting since 2012 that a safe zone of 30-40 kilometers could be established between the northern Syrian towns of Jarablus and al-Rai. However, the plan did not come to fruition at the time. Oktay stressed that the safe zone would enable the return of Syrians to their homes as well. As the U.S. and Turkey are discussing the details about the safe zone, Ankara prioritizes that the safe zone should be free of terrorists, a military source told Daily Sabah on Saturday.

Turkey has been repeatedly stressing that the presence of PKK-linked People's Protection Unit (YPG) along its borders poses grave security threats to the country. Furthermore, the U.S.' longstanding partnership with the terror group under the cover of the fight against Daesh and its heavy arms support to the group have opened deep wounds in ties with Turkey that have yet to heal.

Speaking in the candidate presentation meeting in Ordu province, Erdoğan said yesterday that Turkey has eliminated terrorists in Afrin, Jarablus, al Bab and other regions with successful cross-border operations. He stressed that Turkey will continue to eradicate terrorists targeting Turkey's sovereignty and unity.

Finding itself in a position of having to explain to its NATO ally that it is wrong to arm and support a terrorist group, Ankara has been stressing that this dangerous move will have serious repercussions for the peace and stability in the region.

"Ankara would substantially welcome the step if the safe zone is set up by Turkey. In such a scenario, the safe zone would enable Turkey to clear its borders from the YPG, ensuring its border security," Oytun Orhan, an expert on Syria, told Daily Sabah previously. He added that Trump might have other plans such as placing Arab elements from the Syrian Democratic Forces (SDF) in the region.

The details of the safe zone need to be ironed out, yet Turkey is firmly against the presence of the YPG. A region free of terrorists along its border would reduce Ankara's concerns to an extent.

Last week Chief of General Staff Yaşar Güler and his American counterpart Gen. Joseph Dunford held talks in Brussels about the details of the safe zone.

Erdoğan will also discuss the issue with Russian President Vladimir Putin during his visit to Russia on Wednesday.

Highlighting that the two leaders will evaluate the steps for the safe zone, Russia's Foreign Minister Sergey Lavrov said last week that Moscow "will fully seek to take into account the interests of all parties involved, all of Syria's neighbors."

Ankara has been underlining that it will not allow the YPG to strengthen its grip in Syria. Turkey was prepared to launch an operation east of the Euphrates to eliminate the YPG. However, following the U.S.' decision to withdraw from Syria, Ankara decided to put the operation on hold for some time.

While the establishment of a safe zone would eliminate some of Turkey's concerns, the presence of the YPG in Syria and its plan to form a quasi-state will continue to present a threat to the country. Commenting on the issue, Oktay underscored that Turkey will not allow another terror corridor south of this 32-kilometer zone. "We will never allow a terrorist group [PKK] to turn into a state. It is about Turkey's security," Oktay added.

Meanwhile, Ankara strongly rejected the comments of Brett McGurk, who previously served as special envoy for the U.S.-led coalition against Daesh for three years, claiming that Turkey is "not a reliable" country in Syria and called for support for the SDF.

In an article titled "Trump said he beat ISIS [Daesh]. Instead, he's giving it new life" published in The Washington Post on Jan. 18, McGurk stated "only the SDF provides stability in the areas that once made up the Islamic State in northeast Syria," and added that "Its forces cannot be replaced. And with America leaving, it will need a new benefactor, or else risk fracturing and opening a vacuum into which the Islamic State can resurge." Criticizing the decision to withdraw, McGurk urged Trump "to reverse orders to withdraw and reassess."

He also said that "on Syria, Turkey is not a reliable partner. The Syrian opposition forces it backs are marbled with extremists and number too few to constitute an effective challenge to Assad or a plausible alternative to the SDF."

Responding to McGurk's claims on Twitter, Turkey's ambassador to Washington, Serdar Kılıç wrote on Jan. 19 that, "One should have a nerve to accuse others for the challenges in Syria, when actually he is the one who has misled the consecutive U.S. administrations and created these problems for all of us." Kılıç added that McGurk's departure will help prevent further disasters in Syria.

In relation to the issue, Presidential Spokesman İbrahim Kalın stated on Jan. 19 that McGurk's accusations against Turkey are complete nonsense and only a repetition of PKK propaganda. "Turkey has saved the lives of hundreds of thousands of Syrian Arabs, Kurds, Assyrians and others. You want to give new life to the PKK. Won't happen," Kalın stated.

Even though Trump announced on Dec. 14 that he would bring 2,000 U.S. troops back home, his decision has faced resistance in Washington on the grounds that the move might cause the resurgence of Daesh. Some also criticized the Trump administration for abandoning their steadfast partner the YPG.

Referring to the debates over Daesh, Trump stated on the weekend that "when I took over, Syria was loaded with ISIS [Daesh]" but "we've brought it down to less than 1 percent," using an acronym for the group. He added that now they want to bring back their troops.