Turkey urges US to fulfill Manbij roadmap as soon as possible 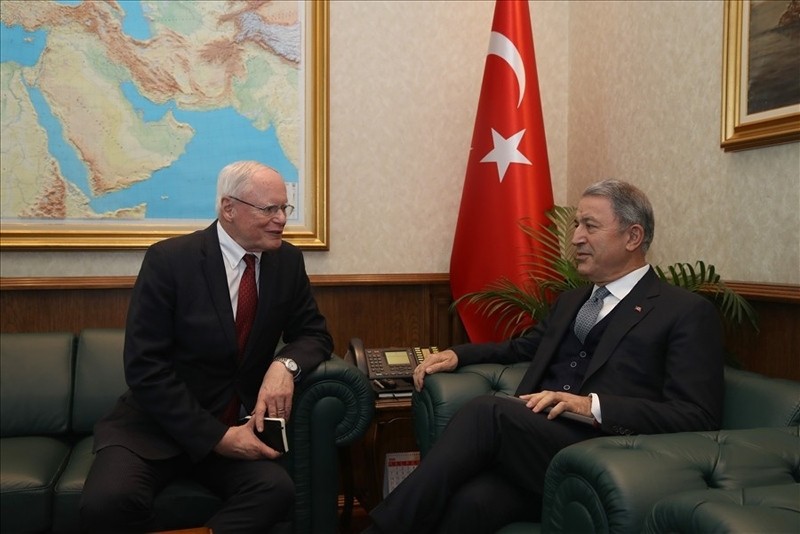 Defense Minister Hulusi Akar warned U.S. Special Representative for Syria Engagement Ambassador James Jeffrey about the PKK's Syrian offshoot the People's Protection Units (YPG) and the completion of the Manbij roadmap as soon as possible, in a meeting in Ankara Friday.

According to reports, Minister Akar told Jeffrey that Turkey expects the U.S. to immediately end its relations with the YPG and fulfill the Manbij roadmap.

The minister highlighted that Turkey is determined to protect its rights and interests in line with international law and agreements, reports said, adding that the meeting touched upon a number of issues, including the recent developments in Syria.

Akar and Jeffrey also agreed that if the both countries collaborate, problems in bilateral relations will be resolved.

Turkey seeks to fully implement the Manbij roadmap, which was first announced in early June to establish security and stability in the city by clearing out YPG forces. The deal envisages the withdrawal of the YPG from the city and joint patrols conducted by the militaries of both countries. YPG forces first gained control of the city in 2016 with the help of U.S-led coalition forces. Turkish and U.S. troops began joint patrols in Manbij on Nov. 1 as part of the Manbij agreement.

Turkey sees the YPG as an extension of the PKK that has claimed the lives of more than 40,000 people in its 30-year terror campaign against Turkey. The U.S., however, while listing the PKK as a terrorist group, opted to continue militarily support for the YPG under the pretext of fighting Daesh, despite its NATO ally's security concerns.