Turkey to establish safe zone in northern Syria, with or without allies' support 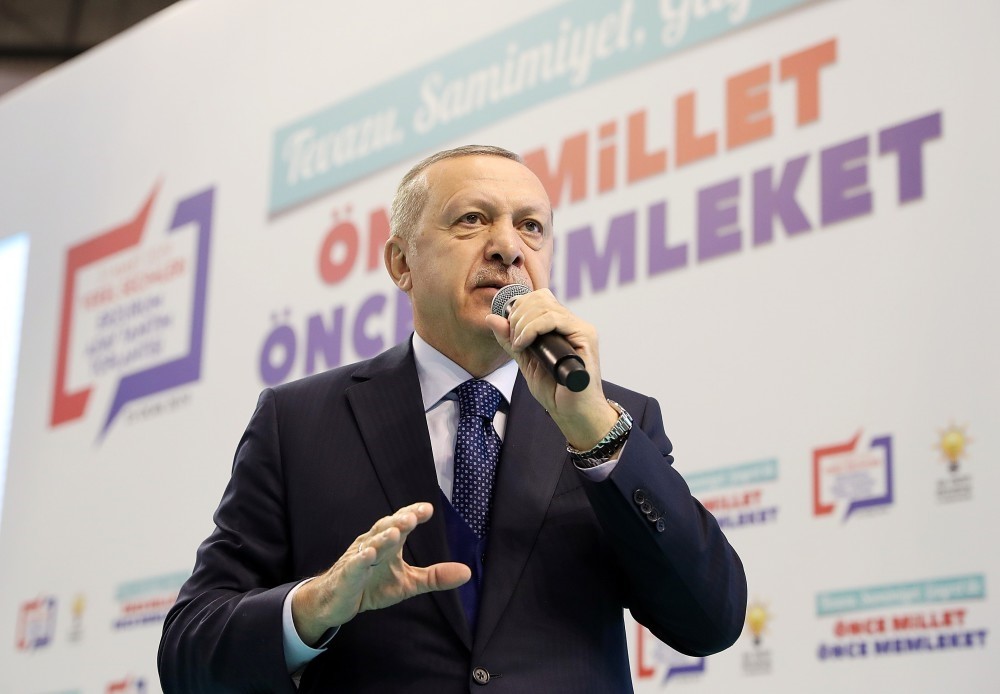 The safe zone will be formed by Turkey on the Syrian border with or without the support of other actors, President Erdoğan affirmed, highlighting that the only acceptable scenario for Ankara regarding the region is one where it has the means of control

Turkey will not hesitate to form a safe zone in northern Syria by itself even if its allies break their promises on the issue, President Recep Tayyip Erdoğan said on Friday, referring to recent talks with his U.S. and Russian counterparts on the matter.

"If promises regarding the safe zone are not kept, we will form it [ourselves]," the president said during a speech he gave at the Justice and Development Party's (AK Party) municipal candidate presentation event in the eastern province of Erzurum.

Pointing out that he expects a safe zone to be established in "a few months," Erdoğan said that Turkey wants logistical support from its allies, mainly the U.S. and Russia, in the process. The idea of the safe zone, although mentioned several times by Erdoğan over the years, surfaced once again during his phone call with U.S. President Donald Trump. In the talk, the two leaders discussed establishing a terror-free safe zone in Syria's north based on the country's territorial integrity. Last week, Erdoğan announced that Turkey would establish a safe zone along the length of its Syrian border with the assistance of U.S.-led coalition forces. The president also mentioned the issue during his recent visit to Russia.

On Wednesday, following his meeting with Russian President Vladimir Putin in Moscow, Erdoğan said Turkey and Russia are on the same page with regards to the planned "safe zone" in northern Syria.

Speaking on the matter during a joint press conference following this meeting, Erdoğan said, "The U.S. has already indicated a positive stance. Neither do we have problems [concerning the safe zone] with Russia."

Putin confirmed Moscow's positive approach to the safe zone, saying, "We respect the interests of our Turkish friends - especially in terms of ensuring their security."

Meanwhile Erdoğan said, "I hope that those who claimed that they will clean Manbij of terrorists keep their promises," adding that Turkey's patience has limits.

"De facto control of the field should belong to us," Erdoğan said, adding that any other solution offers is not negotiable.

"If there is any price for this," he asserted, "we are ready to face it."

The town of Manbij and its surrounding area are controlled by the U.S.-backed Syrian Democratic Forces (SDF), which is dominated by the PKK's Syrian affiliate People's Protection Units (YPG) terrorist group, since August 2016 after ousting Daesh terrorists who captured the town from the moderate opposition in January 2014.

Turkey, however, strongly opposes the YPG's presence in Manbij, which has been a major sticking point in strained Turkey-U.S. relations due to the latter's support for the YPG under the pretext of fighting Daesh. The YPG has organic organizational and operational links with the PKK, a group considered a terrorist organization by the U.S., the EU and Turkey. The U.S. has provided military training and given truckloads of military support to the YPG, despite its NATO ally's security concerns.

To reduce tensions, Turkey and the U.S. agreed on a road map in June 2018 foreseeing the withdrawal of the YPG from Manbij and installing joint Turkish-American patrols, which began in November. However, the process has been sluggish as the terrorist group was still present in the city despite the three-month timetable set for implementing the deal. Mentioning a possible role for the United Nations in coming up with a safe zone in the region, the president said that various examples from the past prove that the UN is not capable of forming such an area.

"The only actor that has the power to provide this [safe zone] in the region is Turkey," he emphasized.

Erdoğan has been suggesting since 2012 that a safe zone of 30-40 kilometers could be established between the northern Syrian towns of Jarablus and al-Rai. However, the plan did not come to fruition at the time. The details of the safe zone need to be ironed out; yet, one thing is clear: Turkey is firmly against the presence of the YPG in the region. A region free of terrorists along its border would reduce Ankara's concerns to an extent.

Ankara has been pointing out that it will not allow the YPG to strengthen its grip in Syria. Turkey is also prepared to launch an operation east of the Euphrates to eliminate the YPG. However, following the U.S.' decision to withdraw from Syria, Ankara decided to put the operation on hold for some time. While establishing a safe zone would eliminate some of Turkey's concerns, the presence of the YPG in Syria and its plan to form a quasi-state will continue to present a threat to the country.

Criticizing the West over its stance regarding the crisis in the region, Erdoğan said that although they try to present the situation as if the people in Syria and Iraq have no relation with Turkey, they are wrong.

"We do not need the invitation of anyone [to enter Syria]," Erdoğan said, referring to the 1998 Adana deal with the country. The Adana Agreement was signed between Turkey and Syria in October 1998, which clearly stated that Syria would not allow any PKK activities within its borders and would block any terror activities that could threaten Turkey's sovereignty.

A possible mission east of the Euphrates, which Turkey's leadership has been suggesting for months, would follow two successful cross-border Turkish operations into Syria - Operation Euphrates Shield launched in August 2016 and Operation Olive Branch launched in January 2018, which were both meant to eradicate the presence of YPG and Daesh terrorists near Turkey's borders.