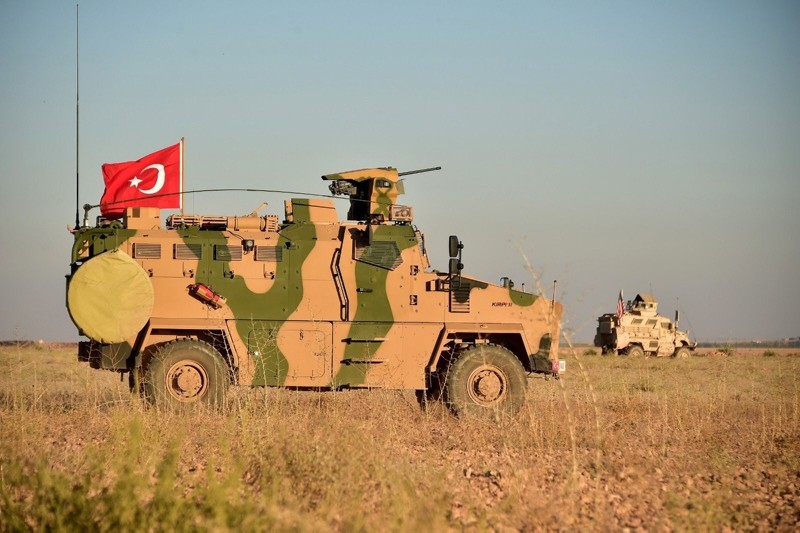 Turkey and the U.S. are looking to fully implement the Manbij road map in an accelerated manner, as Ankara's patience on the issue wears thin.

On the implementation of the Manbij deal, which foresees the withdrawal of the PKK-affiliated People's Protection Units (YPG) from Manbij, a senior U.S. official told Daily Sabah that "we are as committed as Turkish government to the full implementation of the Manbij road map. We are working hard with our partners on the ground to implement the road map we agreed with Turkey."

The source said both Turkey and the U.S. agreed that the process has gathered momentum.

Foreign Minister Mevlüt Çavuşoğlu said Wednesday in Washington that "The process in Manbij has gained pace despite the adverse weather conditions. But the road map should have been completed by now and the reason it hasn't been being the U.S."

Manbij and its surrounding areas have remained under the control of the U.S.-backed Syrian Democratic Forces (SDF) since August 2016. The YPG-dominated group ousted Daesh terrorists who had captured the town from moderate opposition in January 2014.

Turkey has been calling on the U.S. to increase efforts to implement the deal, saying the YPG presence in Syria was a grave threat to its security. The U.S. has faced a furious backlash from Ankara due to its steadfast support for the terrorist group under the pretext of fighting Daesh.

President Recep Tayyip Erdoğan said Tuesday that "Turkey's patience will run out soon if the PKK-linked YPG terrorists do not leave Syria's Manbij within the next few weeks."

As Turkey reiterated its resoluteness to clear terrorist elements from the Manbij region, a senior U.S. official said, "We are aware of the Turkish government's very legitimate security concerns on what northern Syria looks like in the context of our withdrawal."

The source added that "we are aware of the Turkish government's view on some scenarios in which it would take military action to address its national security issues in northern Syria."

"Together we are doing everything possible, to find peaceful ways to address these concerns rather than see a sort of offensive," the source said.

US, Turkey working together on safe zone to address Ankara's security concerns

Foreign Minister Çavuşoğlu announced yesterday that the U.S. and Turkey would set up a task force in order to maintain coordination during the U.S. withdrawal from Syria. "We have put in place this mechanism to ensure this process is carried out in coordination and without any problems," he said.

On the joint efforts to establish a safe zone, the U.S. official said that dialogue between the two sides on the issue were ongoing. "We are working really hard to find ways to create a safe zone that is credible, real and addresses Turkey's security concerns," he said.

Commenting on the recent high-level working group meetings between Turkish and the U.S. delegations, the source said that they were "very productive and constructive from our perspective."

President Donald Trump announced in December that the U.S. will withdraw its 2,000 troops from Syria as Daesh has been defeated. Following the U.S. decision, there have been various questions hanging in the air, including on the future of the YPG and the weapons supplied by the U.S.

When asked about the future of the weapons in the hands of the YPG, the U.S. official said that "we are aware of this; we have made commitments to the Turkish government and we will fulfill our commitments to the extent that we are able to do and conditions on the ground permitting, which is very challenging."

US to take action against violations of Venezuela sanctions

"We have already imposed sanctions on Venezuela. When we impose sanctions if people conduct business with sanctioned entities then they could find themselves subject to the penalties in our sanction regime," the source said in relation to the recent developments in Venezuela.

After the U.S., some European and Latin American countries recognized Venezuela's self-proclaimed president, the source said: "We have talked to the Turkish government about our view of what is going on there. We have encouraged the Turkish government to join the community of democracies that are supporting interim President Guaido at this moment of time."

The source underlined that part of the talks between U.S. and Turkish governments as well as many other governments was "to talk them about our sanction regimes and what the consequences are of not be in compliance with those sanctions regimes."

The U.S. official said the U.S. was concerned with Turkey's decision to purchase the Russian-made S-400 defense system.

"We are concerned that a Turkish purchase of the S-400 missiles will endanger the country's participation in F-35 program and will likely result in some sort of sanctions coming through the legislation called CAATSA," the source said. "Our desire for Turkey to have a more effective and NATO-interoperable system which the S-400 system is not."

He added that the U.S. acknowledged Turkey's defense needs thus it made an offer to sell the Patriot systems.

"We have made the offer and it is being evaluated. We had a number of bilateral exchanges since we made the offer to clarify terms and talk about various possibilities and options," the source said.

The official, however, added that "the U.S. government is of the view that we will not proceed with the Patriot sale if Turkey proceeds to buy the S-400."