Continuous US presence in Syria encouraging for YPG terrorists 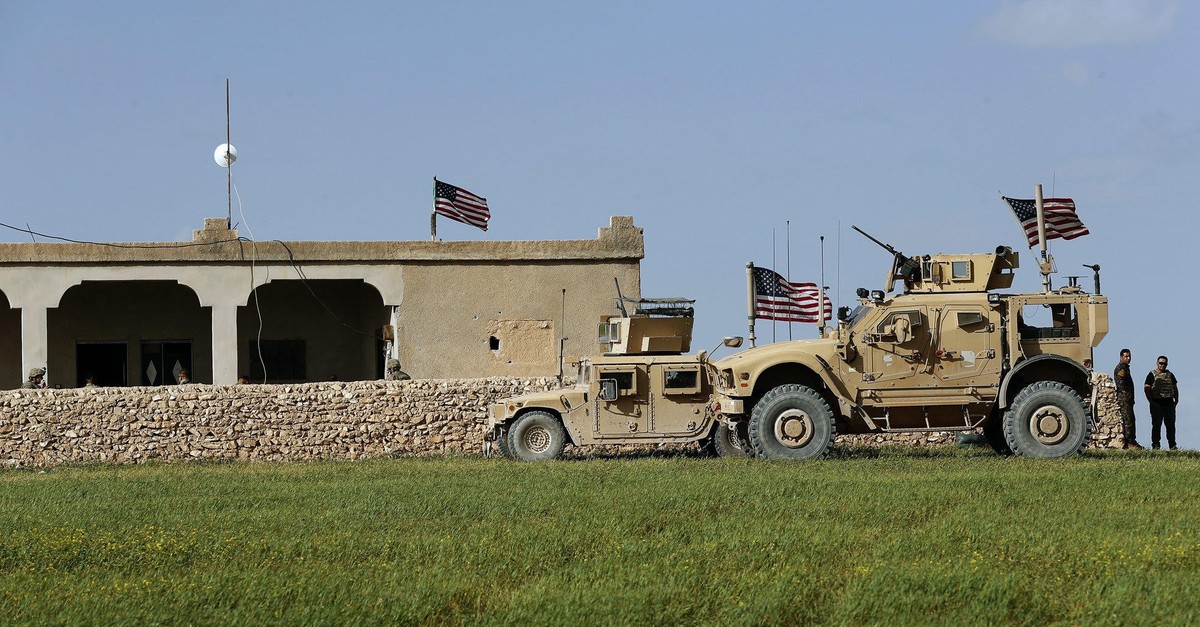 The U.S. announcement that it would leave 200 soldiers behind in Syria after the withdrawal was welcomed by the YPG, as the terrorists see Washington's presence as strengthening their hand against Turkey

Washington's hesitant stance on withdrawal from Syria and a recent White House announcement that it will keep a group of its troops in the country after the pullout has encouraged the PKK's affiliated groups, who pose a security threat to the U.S.' NATO ally Turkey, according to Ankara. The White House said Thursday that the U.S. will keep about 200 troops in Syria for an as-yet-undetermined amount of time following a planned pullout. "A small peacekeeping group of about 200 will remain in Syria for a period of time," spokeswoman Sarah Sanders said in a brief statement.

The White House did not mention the forces being part of an international force in its statement, nor did it specify where the troops would remain. Abdulkarim Omar, an official from the U.S.-backed Syrian Democratic Forces (SDF), which is predominantly led by the People's Protection Units (YPG), told Reuters that they "evaluate the White House decision... positively." "I believe that keeping a number of American troops and a larger number of [other] coalition troops, with air protection, will play a role in securing stability and protecting the region too," he said. The PKK's Syrian affiliate, the YPG, took the advantage in northern Syria after Bashar Assad regime's withdrawal in 2012 by filling the power vacuum, which gave the terrorist organization an opportunity to practically apply its form of governance and form communes, as dictated by its ideology.

With increasing U.S. diplomatic support and vast amounts of weapons deliveries, the terrorist organization tightened its grip on northern and eastern Syrian territories. It ultimately aims to establish an autonomous region in northern Syria by connecting the northwestern Afrin canton to the Kobani and Jazeera cantons in the northeast, posing a threat to Turkey's border security. However, Turkey has so far answered this threat with two cross-border military operations to put an end to the group's autonomy plans, which Ankara terms a "terror corridor."

President Recep Tayyip Erdoğan and other Turkish officials have been signaling an expansion of Turkey's military campaign into the much larger YPG territory east of the Euphrates if the threat continues. High-level officials in Ankara have also been discussing plans to establish a safe zone in northern Syria free from YPG terrorists to ensure national security.

To prevent Ankara's possible offensive or at least gain time to build up preparations, the YPG hopes to hide behind the U.S. presence in the region, criticizing U.S. President Donald Trump's withdrawal decision as a "betrayal."

The YPG has been receiving vast U.S. material support under the pretext of fighting Daesh. However, Ankara has been objecting to Washington's stance, saying that using one terror group to fight another makes no sense.

"This decision may encourage other European states, particularly our partners in the international coalition against terrorism, to keep forces in the region," Omar added. The YPG often uses the "fight against Daesh discourse" as well as captive Daesh militants as a tool to secure continuation of support from the U.S. and European countries.

In late December, after Trump announced the pullout, a YPG official said the terrorist group is planning to release Daesh prisoners, The New York Times reported.

"The best result of terrible options is probably for the Syrian regime to take custody of these people," the official was quoted as saying by the paper, adding that: "If they are released, it's a real disaster and major threat to Europe."

Turkey has also continued intense diplomatic traffic with its NATO ally to solve the YPG problem diplomatically. As part of these efforts, Erdoğan and Trump discussed the Syria troop withdrawal in a phone call late Thursday. During the call, the presidents discussed the latest developments in Syria, reiterating joint commitment to fighting terror and agreeing to support a political resolution to the conflict.

Trump's decision in December rattled close allies and drew swift rebukes from some of his most ardent supporters on Capitol Hill. Sen. Lindsey Graham, one of the president's closest legislative allies, publicly broke with him over the planned pullout.

Following the White House's announcement, however, he lauded Trump's decision to leave some U.S. forces in Syria "as part of an international stabilizing force." "A safe zone in Syria made up of international forces is the best way to achieve our national security objectives of continuing to contain Iran, ensuring the enduring defeat of ISIS, protecting our Turkish allies and securing the Turkish border with Syria," Graham said, using another name for Daesh.

However, some backed the U.S. President's stance on Syria, supporting a complete pullout. Well-known international relation theorist John Mearsheimer said that Washington has no strategic interest in Syria, voiced support to the withdrawal.

Speaking at a panel in Washington, Mearsheimer emphasized that Trump does not have a "liberal hegemony" approach in his perception of foreign policy.