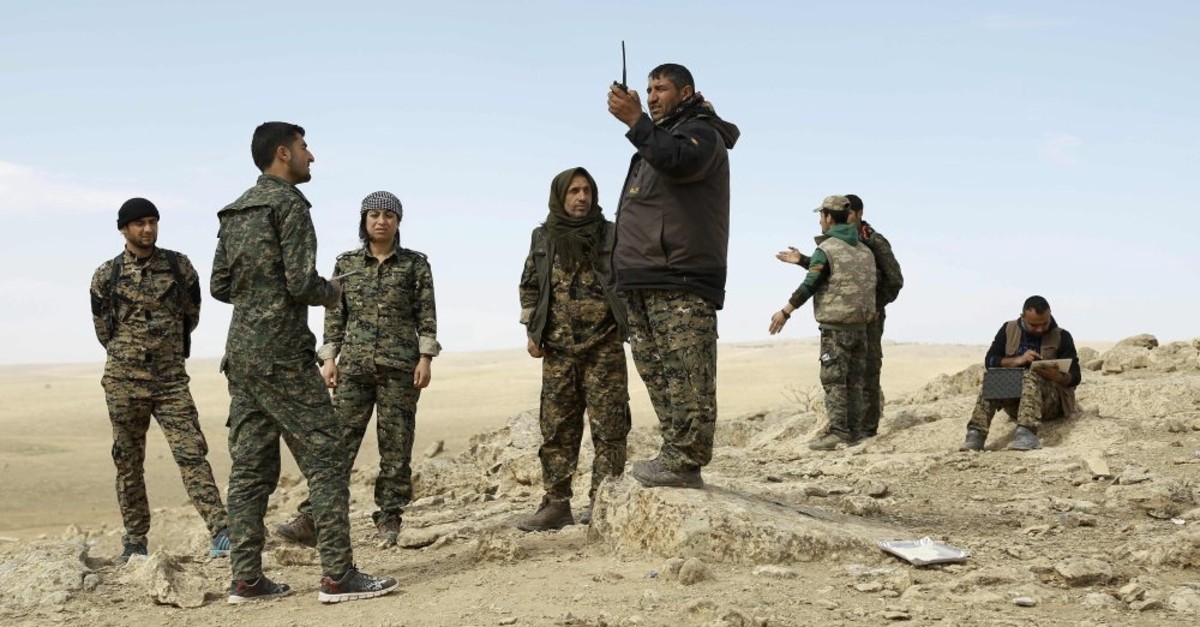 Members of the YPG-dominated SDF listen to instructions as they stand on the outskirts of the town of Chaddade in the northeastern Syrian province of Hasakah, Feb. 19, 2016.
by Daily Sabah Mar 06, 2019 12:14 am

Despite being ignored by the Western media, the YPG's human rights violations against minorities, including the Assyrian communities, continue in areas under the terrorist group's control in northern Syria

An Assyrian activist and journalist living in Sweden underscored that the international community and Western media disregard atrocities and human rights violations against the Assyrian community committed by PKK-affiliated People's Protection Units (YPG) in Syria despite many human rights organizations' documentation of these incidents. "Many attacks on Assyrians were revealed [in the report]. Unfortunately, many politicians and journalists in Sweden didn't see these reports and fell under the fake spell of those who promote the YPG," Caroline Envia Khamo said in an article she wrote for Swedish broadcaster SVT.

Noting that the terrorists were committing arbitrary killings and confiscating property and land belonging to the Assyrians, Khamo underscored that, "Unfortunately, it is impossible to read these events in the Swedish media, such as the killing of Assyrians by the YPG and the oppression their schools are exposed to."

The Assyrians are a community that traces their heritage back to ancient Mesopotamia, and they speak a Semitic language distinct from Arabic, which exists in Iraq and Syria with among smaller population in Turkey. Assyrians have been one of the communities that suffered the most at the hands of the YPG terrorist organization. Many Assyrians, including Assyrian leader David Jendo who previously questioned the methods of the YPG, were killed and tortured after being kidnapped. The YPG deliberately seized the properties of these people and is trying to change the school curriculum as a part of its systematic demographic change policy in a bid to lay the groundwork for their future claims of an autonomous region to be established according to the demographic structure.

Stressing that there is a need for frank politicians and journalists who will question the situation in Syria and in real terms, Khamo called for Swedish politicians to condemn the YPG for its atrocities.

Touching on the YPG practices in regard to modifications in Assyrians schools, she highlighted that some of the schools were attacked for refusing the oppression in the educational curriculum.

Previously, Gabriel Kurt, the honorary president of the Development and Reconciliation Foundation of Yemişli village in the Midyat district of Turkey's southern Mardin province, where there is a considerable Assyrian population, was also quoted by Anadolu Agency (AA) as saying that the YPG oppresses the Assyrians the most.

"Assyrians are oppressed mostly in al-Hasakah and Qamishli provinces by the YPG. These [YPG terrorists] are in a way playing by claiming that they are against Daesh and are trying trick the whole world," Kurt had said. He had also underlined that the YPG was confiscating the properties of the Assyrians in Syria. "Against the outside world, the YPG claims that it is modern and democratic. However, in Syria, they bomb the restaurants of the Assyrians. They confiscate [Assyrian] properties. They torture and kill our children, kidnap our journalists," Kurt had said, recalling what happened to Souleyman Youssef, an Assyrian reporter who was kidnapped and tortured by the terrorists for writing about the human rights violations of the YPG.

The YPG has used schools in areas under its control to indoctrinate students with its militarist, ethnocentric ideologies. The Armenian and Assyrian private schools in the town of Malikiyah, also known as Derik in Kurdish, were closed on Aug. 7, 2018 with decrees issued by YPG-linked local education authorities citing that they did not get necessary permission or abide by the curriculum. Following the closures, the Assyrian Democratic Society (ADS) accused the YPG of "intimidating" the region's Assyrian community. The terrorist organization reportedly hopes to expand the use of its curriculum to high schools. This has prompted many parents in the region, who do not want their children to be brainwashed by terrorist propaganda, to send their children to private schools instead.

Groups like Human Rights Watch, Amnesty International, KurdWatch, as well as the United Nations also have reported numerous human rights violations committed by the YPG, including recruiting child soldiers, deliberately causing forced displacements, arbitrary killings and torture. The Syrian Network for Human Rights (SNHR), for example, reported in January 2016 that the YPG looted areas it held, brought about demographics changes and ethnic cleansing in areas with no Kurdish population, and destroyed private property.

Another report by Amnesty International documented a wave of forced displacement and home demolitions amounting to war crimes carried out by the autonomous administration dominated by the YPG in 2015. The report further underscored "extensive displacement and destruction did not occur as a result of fighting. Clear evidence revealed a deliberate, coordinated campaign of collective punishment of civilians in villages previously captured by [Daesh]."

The YPG, on the other hand, continues to be the U.S.' closest ally in Syria under the pretext of fighting Daesh and under the umbrella of the YPG-dominated Syrian Democratic Forces (SDF), despite the group's history of human rights violations and its organic links with the PKK, a group recognized as a terrorist organization by the U.S., the EU and Turkey.