US delivers equipment to YPG terrorists near Turkish border in Syria 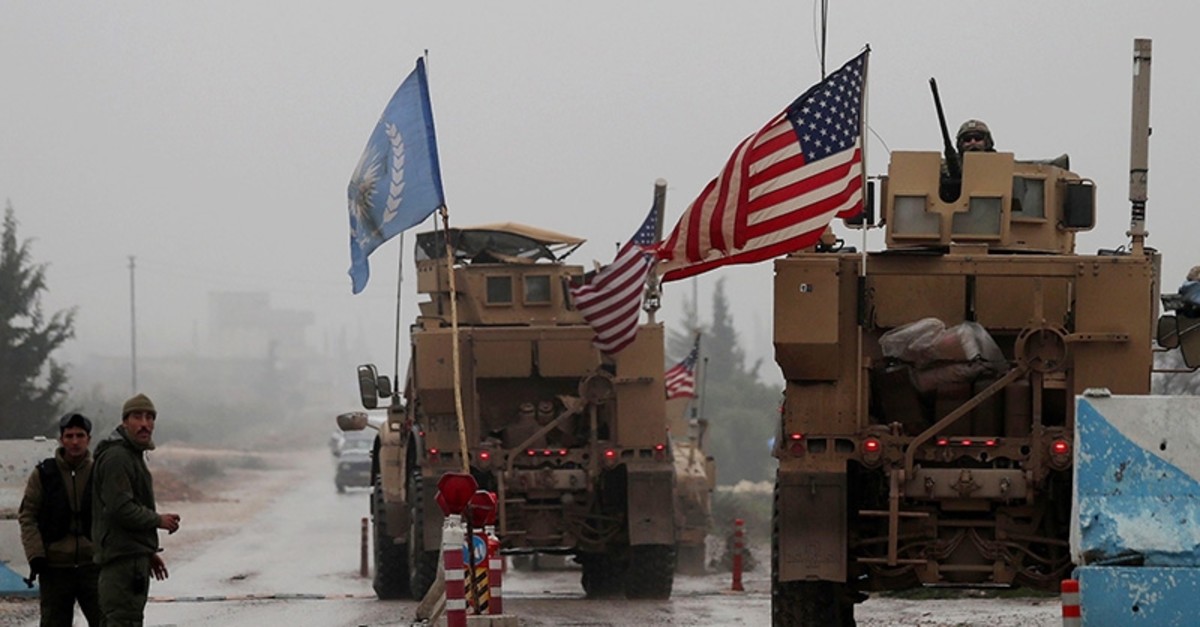 A line of US military vehicles drive through a checkpoint of the Internal Security Forces in Manbij as they head to their base on the outskirts of the northern Syrian city on Dec. 30, 2018 (AFP File Photo)
by Daily Sabah Apr 22, 2019 4:21 pm

Washington's support for the PKK-affiliated terrorists in Syria continues with the latest delivery of 200 truckloads of construction materials and heavy equipment amid Ankara's concerns about national security.

According to information obtained by Anadolu Agency (AA) from local sources, the trucks were transported through the Semalka Gate at the Iraq-Syria border to areas controlled by the PKK-affiliated People's Protection Units (YPG). The sources added that the trucks have reached an oil field, which has been used as a distribution center for different YPG-held locations.

The YPG has been receiving U.S. backing under the pretext of fighting Daesh, although Ankara has been objecting to Washington's stance, saying that using one terror group to fight another makes no sense.

With increasing U.S. weapon and material support, the YPG terrorists have tightened their grip on northern and eastern Syrian territories, which ultimately aims to establish an autonomous region in northern Syria by connecting the northwestern Afrin canton to the Ayn al-Arab (also referred as Kobani) and Jazeera cantons in the northeast, posing a threat to Turkey's border security. Ankara has so far answered this threat with two cross-border military operations to put an end to the group's autonomy plans, which Turkey calls a "terror corridor."

Turkish officials have been signaling a military campaign into the much larger YPG territory east of the Euphrates if the threat continues. High-level officials in Ankara have also been discussing plans to establish a safe zone in northern Syria free from YPG terrorists to ensure national security.

Speaking on the delivery, the sources also emphasized that the equipment may be used in the construction of tunnels near the Turkish-Syrian border, which were reportedly started long ago as part of long-running preparations against a possible cross-border operation. Turkish officials say Ankara will not remain silent with the presence of PKK-affiliated militants near the Turkish border.

Recent AA footage revealed that YPG militants continue to dig ditches and tunnels in provinces near the Turkish-Syrian border, including in Tal Abyad, Ras al-Ayn, Qamishli and al-Malikiyah. The militants also opened new tunnels and extended existing ones in the cities of Manbij and Ayn al-Arab.

Last December, AA obtained similar drone footage showing the terrorists digging trenches and tunnels, presumably to hinder Turkish armored vehicles from crossing the border for an operation east of the Euphrates. They were also using cement to fortify tunnels and trenches spanning 2 meters high by 1 meter wide in order to connect their positions near the border. The footage also showed buildings thought to be local police stations with photos of terrorists on their walls.

The YPG applied the same method in northwestern Syria's Afrin before Operation Olive Branch was launched. But the strategy eventually failed as the Turkish military, along with the Free Syria Army (FSA), liberated the city center of Afrin in two months.

Turkey recognizes the PKK and the YPG as organically linked terrorist groups. Previously, Turkey conducted two offensives in northern Syria: Operation Euphrates Shield and Operation Olive Branch. The first was launched by Ankara to clear its borders of Daesh terrorists, while the second was to prevent the YPG's plan of establishing an autonomous region in northern Syria.

So far, thousands truckloads of weapons were delivered by Washington to the terrorist group. Despite Washington promising to retrieve the weapons provided to YPG earlier, later remarks coming from the White House have changed and began to suggest that they cannot retrieve all of the weapons, which, according to Ankara, may be eventually transferred to the PKK to be used in its terror campaign against Turkey, which has already nearly 40,000 lives.