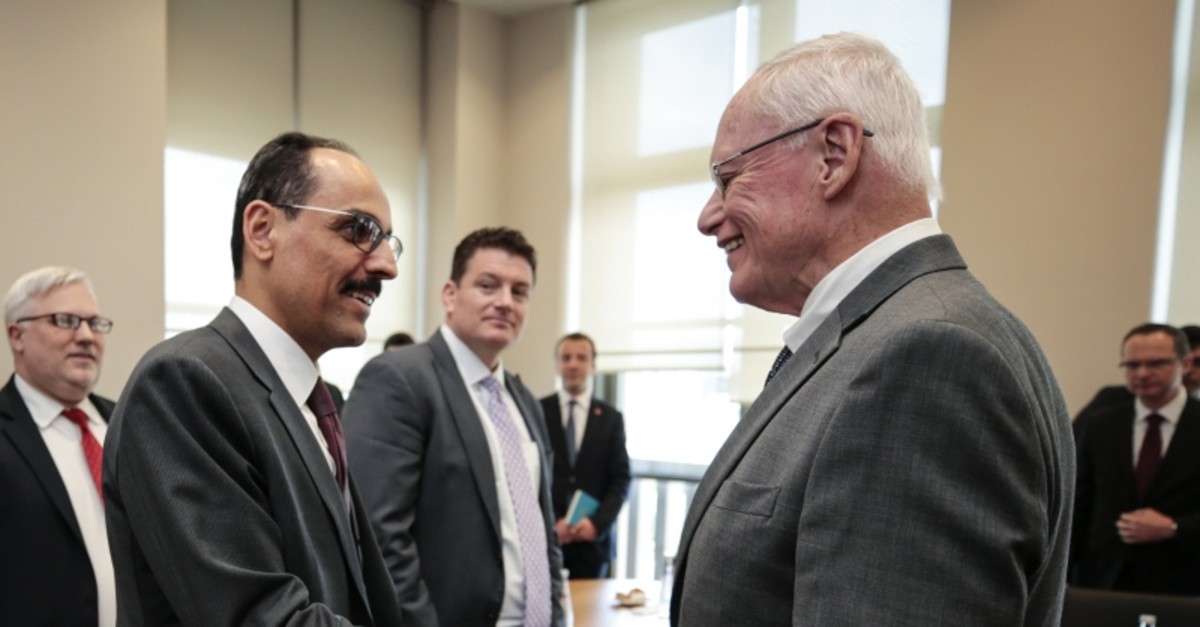 Presidential Spokesman Ibrahim Kalın met with James Jeffrey, the U.S. special representative for Syria engagement and the special envoy for the anti-Daesh coalition, on Wednesday at the Presidential Complex in Ankara to discuss latest developments in Syria.

According to presidential sources, Kalın, Jeffrey and their respective delegations discussed Turkey's national security priorities and the fight against terrorism in Syria, specifically regarding the establishment of a safe zone, operations east of the Euphrates, the implementation of the Manbij road map, protection of the Idlib de-escalation deal with Russia and Iran, and the fight against all terrorist elements, including Daesh and the PKK-affiliated People's Protection Units (YPG).

Kalın and Jeffrey discussed how establishing a safe zone would ease Turkey's security concerns and clear the region of terrorist groups, said the sources, who asked not to be named due to restrictions on speaking to the media.

The delegations also discussed a political settlement and the reconstruction of Syria within the framework of upholding the country's territorial integrity.

The meeting emphasized the importance of maintaining cooperation on Syria in accordance with the principles of trust and transparency.

The U.S. State Department said Monday that Jeffrey would travel to Ankara on Tuesday for high-level talks with Turkish officials.

U.S. special envoy Joel Rayburn is accompanying Jeffrey on the visit, which will continue through Thursday.

The State Department had said the talks would include "addressing Turkey's legitimate security concerns, promoting stability and security in northern Syria as the U.S. military draws down its presence," as well as the defeat of Daesh and implementation of U.N. Security Council resolution 2254, which demands a cease-fire and political solution for the country.

As the U.S. continues its preparations to drawdown its presence in Syria, Turkey has aired concerns about Washington's support for YPG/PKK terrorists in northeastern Syria.

Jeffrey said in April that the U.S. would continue working on an established safe zone along the Turkish-Syrian border, in which YPG/PKK forces would withdraw to ensure it remains free of any threat to Turkey.

Syria has been locked in a vicious civil war since early 2011, when the Bashar Assad regime cracked down on pro-democracy protests. Since then, hundreds of thousands of people have been killed and more than 10 million displaced, according to U.N. officials.

After visiting Turkey, U.S. officials will travel to Geneva where they will meet other Syria envoys from Egypt, France, Germany, Jordan, Saudi Arabia and the United Kingdom.

In Geneva, Jeffrey will "discuss the latest developments in the ongoing Syrian conflict, with particular emphasis on rising violence in northwest Syria, the need for unhindered humanitarian assistance throughout the country, and further support for U.N. efforts to foster a Geneva-based political process," the U.S. State Department said.