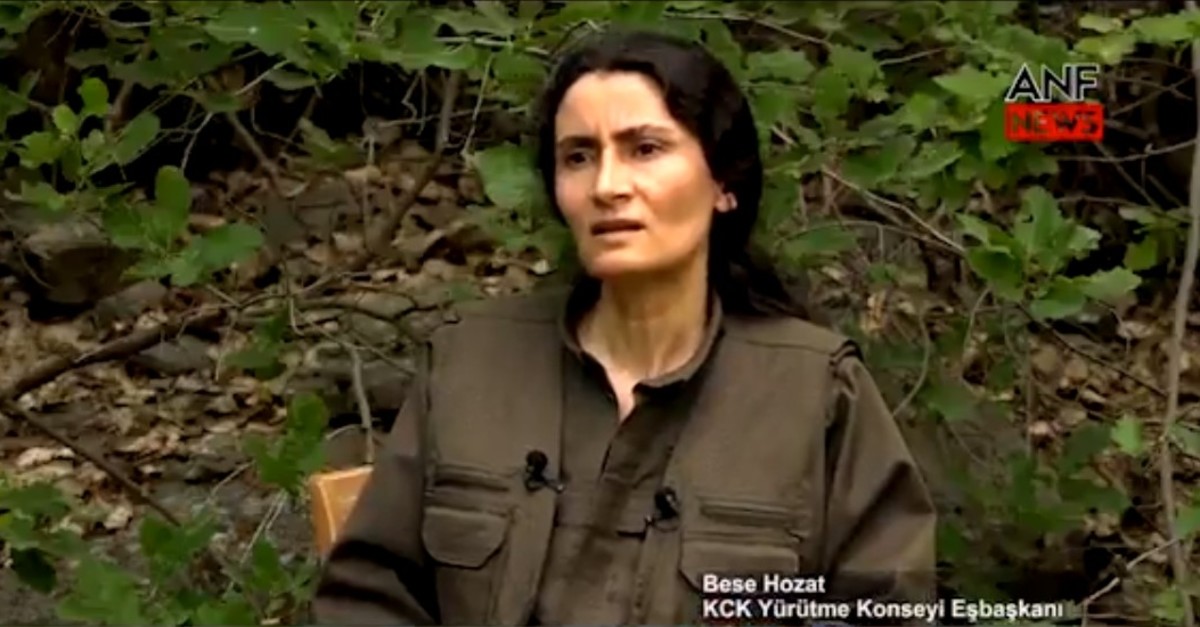 A senior leader of the PKK has openly declared the terrorist group's support for Ekrem Imamoğlu, the main opposition Republican People's Party (CHP)'s candidate in the rerun of the Istanbul mayoral elections scheduled for June 23.

"Whichever candidate positions themselves against fascism in Istanbul, let it be Ekrem Imamoğlu or another candidate, we will support them," Hozat said.

She went on to describe the People's Alliance — formed by the ruling Justice and Development Party (AK Party) and the Nationalist Movement Party (MHP) and supported by more than half of the country — as a "fascist government," saying that "the Kurds" will support whoever is running against that bloc in Istanbul.

The terrorist, born under the name Hülya Oran in 1978, is in the red category of Turkey's most wanted terrorists list and currently being sought with a reward up to 4,000,000 Turkish liras ($650,000).

Hozat's messages were interpreted as an open declaration of support from the PKK to the Nation Alliance formed by the center-left CHP and the right-wing Good Party (IP). The CHP and the IP were widely criticized ahead of the March 31 local polls for forming a veiled alliance with the HDP without acknowledging it over fears of backlash from their voter bases. The CHP rejects such accusations.

Previously, Imamoğlu also praised former HDP Co-Chairman Selahattin Demirtaş, saying that his peaceful and universal discourse may be an opportunity for the country and may pull down the walls. Demirtaş was arrested in November 2016 over terrorist propaganda.

The HDP did not field candidates for the elections on March 31 for a majority of mayoral posts in areas apart from the predominantly-Kurdish eastern and southeastern parts of Turkey, calling on its voter base to support other opposition candidates. The party declared support for Imamoğlu on Thursday for the renewed elections on June 23.

This is not the first time Hozat or other senior PKK terrorists, such as PKK's acting leader Murat Karayılan or KCK's other co-chair Cemil Bayık, have called on the HDP to support or form an alliance with the CHP.

On April 17, Imamoğlu was declared the winner of the Istanbul mayoral elections by the provincial election board with a slim margin of 13,729 votes ahead of AK Party's Binali Yıldırım. Upon appeals by the AK Party and the MHP, the Supreme Election Council (YSK) ruled Monday to annul the elections and re-hold them over irregularities involving some one-third of the balloting committees.

Hozat's hasty messages also comes after the PKK's jailed leader Abdullah Öcalan issued a message calling on the Syrian Democratic Forces (SDF), an umbrella organization that is dominated by the PKK's Syrian affiliate the People's Protection Units (YPG), to pursue solutions in Syria other than through conflict, according to a statement also read out by his lawyers on Monday.

On May 2, Öcalan was allowed to meet with his lawyers for the first time since 2011, and the timing of that meeting lead to wide speculations by the opposition that the government is seeking another reconciliation process with the PKK, similar to the period between 2012 and 2015.

However, President Recep Tayyip Erdoğan and other officials firmly rejected that such plans were underway.

Founded in 1978, the PKK has waged a decadeslong bloody campaign against Turkey. Listed as a terrorist group by the United States, Turkey and the EU, the PKK has carried out hundreds of attacks against Turkey for nearly four decades, claiming over 40,000 lives.

The PKK staged its first wide-scale attack as part of its violent campaign against the Turkish state in 1984, organizing two simultaneous raids on Siirt's Eruh and Hakkari's Şemdinli districts. A group of terrorists attacked the gendarmerie station in Eruh, killing a soldier, wounding six other soldiers and injuring three civilians. Meanwhile, another group of terrorists attacked the open air casino of the gendarmerie, officers' lodges and the district gendarmerie station, killing an officer, a non-commissioned officer and a soldier.

In June 1987, the PKK gunned down 30 people, including 16 children and six women, in Pınarcık village which was mostly made up of the families of temporary village guards in Mardin's Ömerli district. The group's massacres started to become more frequent and increasingly targeted civilians.

On May 24, 1993, PKK terrorists blocked the Bingöl-Elazığ highway and gunned down 33 off-duty soldiers they forced to get off of a coach.

Fire also became a recurrent theme in the PKK's attacks, as evident in the Bağlarbaşı massacre on July 5, 1993 when they staged an armed assault on the village and set fire to 57 houses, killing 33 people.

When it came to 1996, the PKK had committed its first suicide attack on Turkish security forces. Zeynep Kınacı, code-named Zilan, walked into a group of soldiers during a flag-raising ceremony and blew herself up, leaving eight soldiers killed.

The group soon became infatuated with suicide bombings and roadside bombs, and started to target foreigners as well. The PKK bombing at the famous Spice Bazaar in Istanbul's Eminönü district in 1998 left seven killed, including three children, and 121 people, 10 of them foreigners, wounded.

A decade later in 2008, the group decided to carry out a twin bombing, planting two separate explosives in Istanbul's Güngören district. They claimed 18 innocent lives, including five children, and injured 154 people.

The October 6-7 Kobani protests were another memorable period involving the PKK. In 2014, 34 civilians and two police officers were killed and 221 civilians and 139 police officers were wounded in clashes between pro-PKK/HDP protesters with the conservative Free Cause Party (HÜDA-PAR) followers in southeastern Turkey, in addition to clashes pro-PKK/HDP protesters and police in large cities in western Turkey. The protests were ignited by the calls of Demirtaş.

Awake or asleep, it meant nothing to the PKK, it chose its victims mercilessly. In July 2015, the group murdered police officers Okan Acar, 25, and Feyyaz Yumuşak, 24, in their sleep at their house in the Ceylanpınar district of Şanlıurfa. The incident became a milestone in the Turkish government's efforts to fight against terrorism and marked the end of the reconciliation process.

The PKK's death toll kept on growing as the terrorist group started implementing adopted an urban warfare strategy to carve out enclaves within the Turkish territory while using local population as human shields, using the experience obtained by their Syrian offshoot the People's Protection Units (YPG) during the civil war in Turkey. Municipalities run by the pro-PKK Peoples' Democratic Party (HDP) helped the terrorists in various towns and cities to dig trenches and erect barricades, which were manned by local sympathizers and youth. Mainly deployed in southeastern Diyarbakır, Şırnak and Mardin provinces, this strategy led to the destruction of entire neighborhoods in clashes, with the most damage inflicted on Şırnak city center and Sur, Cizre and Nusaybin districts.

In the meantime, the PKK started increasingly resorting to suicide attacks throughout Turkey, mainly using recruited militants and explosives brought in from YPG-controlled areas in northern Syria

A deadly explosion targeted commuters and officials during the evening rush hour on capital Ankara's Merasim Street, close to the Turkish General Staff and parliament buildings. The attack killed 29 people and wounded 61 others. The capital was again targeted on March 13, 2016, when PKK terrorists attacked crowded central Kızılay square using a bomb-laden car, killing 36 civilians and injuring 125 others.

In 2016, the PKK stooped to a new low, killing unborn babies. It detonated a car bomb detonated outside a police station in Mardin's Midyat district, killing three civilians and two police officers, one of which was pregnant. 51 people, including 23 civilians, were also wounded in the attack.

Security forces were frequently targeted in bombing attacks in this period. The deadliest of such attacks took place on December 20, 2016 when 38 police officers and 8 civilians were killed in twin blasts targeting riot police deployed near Beşiktaş home ground Vodafone Stadium in Istanbul. A car bomb went off outside the stadium two hours after a football match had ended. Seconds later, a suicide bomb was detonated in nearby Maçka Park, where many fans and police officers were located.