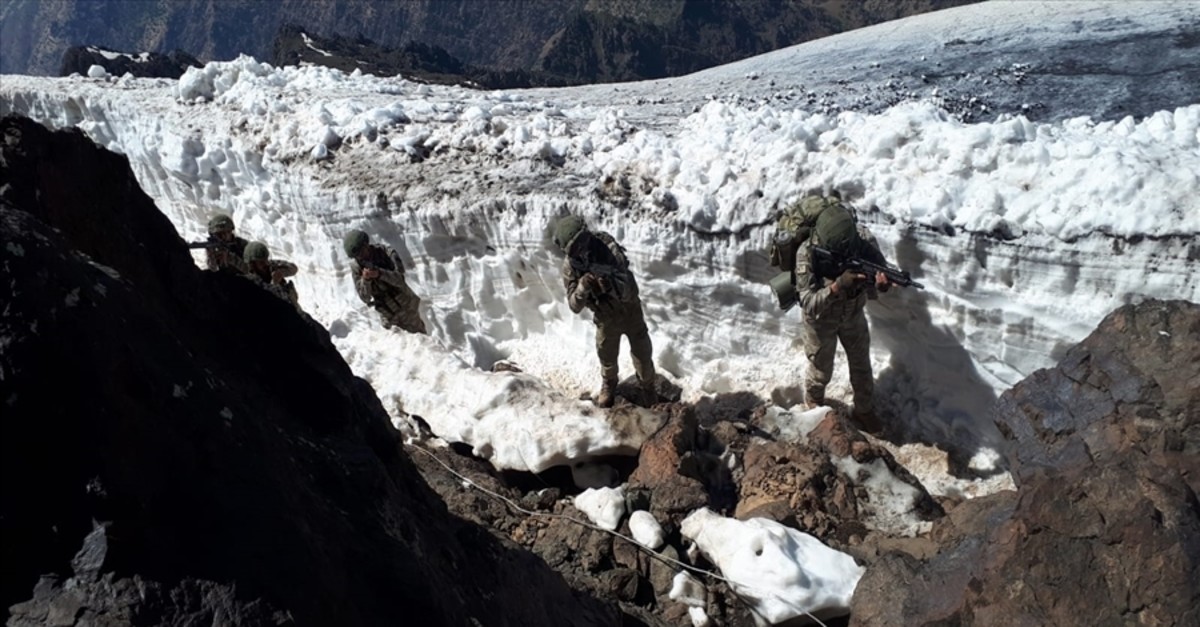 Turkey has focused on completely eliminating terrorist threats in northern Iraq that emanate from the PKK presence. Security forces intensified Operation Claw with air support against militants and settlements of the terrorist organization in the region. "We aim to completely eradicate recent terror threats with Operation Claw. There will not be a single cave left that has not been destroyed," Defense Minister Hulusi Akar said yesterday in Adana. He added that Land Forces Cmdr. Ümit Dündar deployed to the southeast of Hakkari province near the Iraqi border to command the operation. The Defense Ministry said yesterday in a statement that 15 terrorists have been killed since the operation began on Monday in Hakurk, northern Iraq, which is an area that has been used to carry out frequent attacks in southeastern Turkey for decades. Hakurk is among the PKK terrorists' main bases used to infiltrate Turkey or attack Turkish border outposts.

The area is located some 30 to 40 kilometers south of the Derecik district of Hakkari, and currently serves as the main grouping base for terrorists between their headquarters in the Qandil mountains near the border with Iran and Turkey. Commando forces, receiving air support from attack helicopters, artillery and airstrikes targeting PKK shelters and ammunition depots, continue to clear weapons emplacements, shelters and caves. While armed and unarmed drones also provide assistance, Turkish forces are also using the domestically-produced Bora surface-to-surface tactical ballistic missile for the first time in combat.

"Terrorist targets in Qandil, Asos and other locations were hit by domestically-produced land fire-support weapons for the first time," Akar said.

The Undersecretariat of Defense Industries has been working on the Bora project since 2009, and Turkish defense contractor Roketsan has been charged of the development and production of the missile system.

Releasing a statement, the Defense Ministry also said that two Turkish soldiers lost their lives due to an explosion by an improvised explosive device during Operation Claw and expressed their condolences.

Operation Claw was launched at 8 p.m. on Monday and Akar, Chief of General Staff Gen. Yaşar Güler and Army, Air Force and Navy commanders directed the operation throughout the night at the Command and Operation Center at the Turkish General Staff headquarters in Ankara.

Speaking about the operation, Abdullah Ağar, an army veteran and security expert, said the Turkish Army aims to prevent the infiltration of PKK terrorists into Turkish soil from Hakurk and spoil settlement of militants in the area.

Ağar added that Ankara also obviates the possible deepening of destabilization due to proxy clashes in Iraqi soil in case of a hot conflict between U.S. and Iran.

Turkey had previously warned the Kurdish Regional Government (KRG) and Iraqi government numerous times on eliminating the PKK's presence to maintain Turkey's border security. Despite top officials from both governments often expressing their discomfort with PKK camps and activities, saying that they won't allow militants to attack Turkey from their soil, no serious action was taken in this regard.

Akar discussed security and cooperation issues with his U.S. counterpart Patrick Shanahan yesterday in a phone call, the Defense Ministry said in a statement.

The statement did not elaborate on the content of the conversation. A key issue on the two countries' bilateral agenda is the fight against terror groups in Syria, where the U.S. has backed the YPG, supposedly in its bid to oust Daesh from the region. Ankara has long voiced its objections to this dubious partnership, arguing that arming one terror group to fight another will not achieve the desired outcome. Akar indicated earlier this month that the U.S. has moved closer to Turkey's position in Syria and showing some flexibility in its approach to a planned safe zone to be established in northern parts of the country along the border with Turkey.