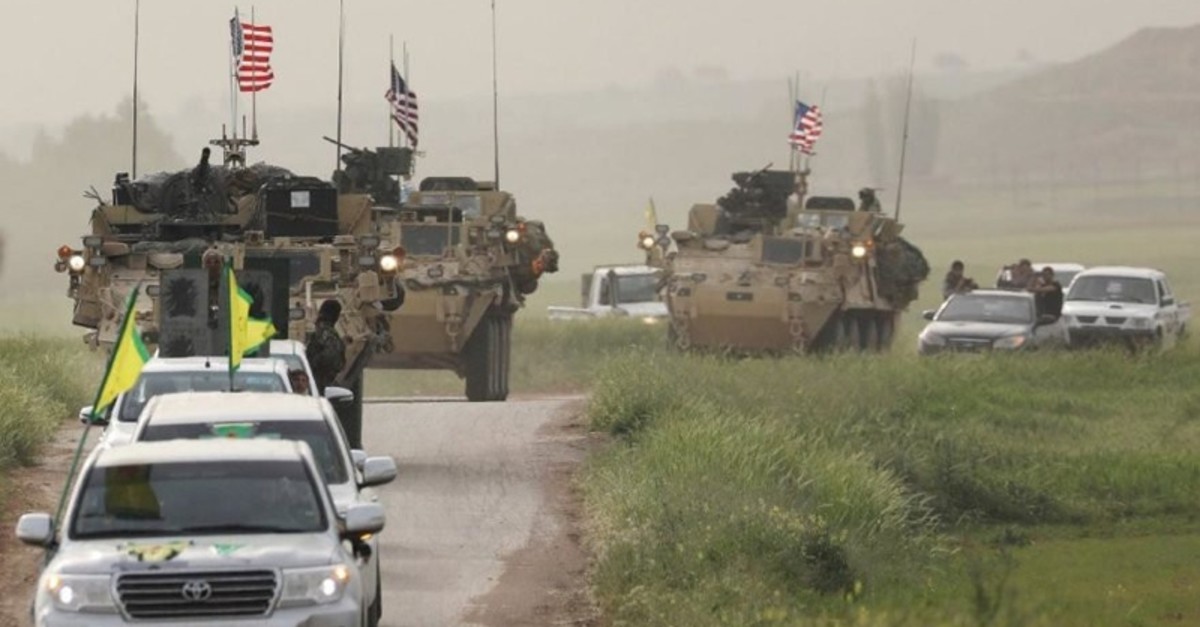 U.S. soldiers provided heavy weaponry training to terrorists at camps of the PKK's Syrian affiliate People's Protection Units (YPG) in Syria, a captured suspected terrorist confessed, once again revealing the ties between the U.S. and the terror group.

The Chief Public Prosecutors Office in southeastern Turkey's Gaziantep province opened a case against a Syrian national on charges of "being a member of a terrorist organization," within the scope of a probe into the PKK terror group's affiliates in Syria.

The suspect, identified as H.M., said in testimony that he came to Turkey approximately six years ago but returned to Syria after his father living in Aleppo got sick. The terrorist said that after spending two months in Aleppo, he went to the Pendir village located near northern Syria's Ayn al Arab, also known as Kobane, which is controlled by the YPG terrorists.

The terror suspect confessed that the YPG terrorists had forcefully taken him into the terror group's camps, noting: "The person code-named 'Amed,' who was in charge of my team, greeted us there. He gave me the code name 'Eriş.' We received armed and ideological training there for 40 days."

The suspect said that the training included ideological doctrine such as the establishment of Kurdistan State which consists of four regions, consisting of parts of Turkey, Iraq, Iran and Syria. He confessed that the terrorists in YPG camps said "we are no different than the PKK except for our names," adding that Abdullah Öcalan – the jailed terrorist leader of the PKK – is the leader of both groups.

The suspect said that he was taken to another camp after his training in the first camp, noting: "During my time in the YPG, weapons, bombs, rockets, ammunition, food and clothing needs have been delivered with vehicles."

H.M., who said he trained with about 150 others, said that after training was completed, they were separated into 30-membered groups and each group received two machine guns, two rocket launchers, 30 Kalashnikovs, ammunition and a pickup truck.

The terrorist said in the testimony that he started to stand guard near the Euphrates River, on the opposite side of Jarablus, after completing his training, adding that the YPG members wanted them to fire guns to scout planes, adding "they were flying drones to control us."

H.M. said he managed to escape to Turkey, where he was detained by security forces along the border, after seeing the evil face of the terror organization.

The relation between the U.S. and the PKK's Syrian affiliates has long been a concern for Turkey as the terrorist group's presence on the Turkish border poses grave security threats to the country's national security.

During the fight against Daesh, the U.S. opted for partnering with the YPG despite its NATO ally's security concerns and provided truckloads of weapons to the terrorist group. Some 22,000 truckloads of arms and ammunition have been given to the YPG so far. Some of the arms include cruise missiles, Anti-Tank Guided Missiles (ATGM) and shoulder-launched surface-to-air missiles (MANPADS).

The delivery of arms and equipment to the YPG, which is still poisoning bilateral relations between the two NATO allies, began in 2014 and intensified in subsequent years.

The presence of these weapons has caused concern in Ankara, threatening the stability of northern Syrian areas that were liberated from Daesh during Operation Euphrates Shield and Operation Olive Branch. There are also other serious possible threats to Turkey, including the possibility of the transfer of these U.S.-made weapons to southeast Turkey through the border controlled by the YPG to be used against the Turkish army by PKK terrorists.

Also, reports have suggested that arms and ammunition given to the YPG were smuggled across Turkish borders through the Amanos Mountains near Turkey's southern province of Hatay, aiming to help the PKK's domestic terrorism activities. The Turkish army cut off this road for delivery after its Operation Olive Branch in Afrin last year.

The PKK – considered a terrorist organization by the U.S., Turkey and the E.U. – has waged an insurgency against the Turkish state since 1984. In its more than 30-year terror campaign against Turkey, the PKK has been responsible for the deaths of some 40,000 people, including many women and children.