Turkey determined to eliminate terror corridor from its borders 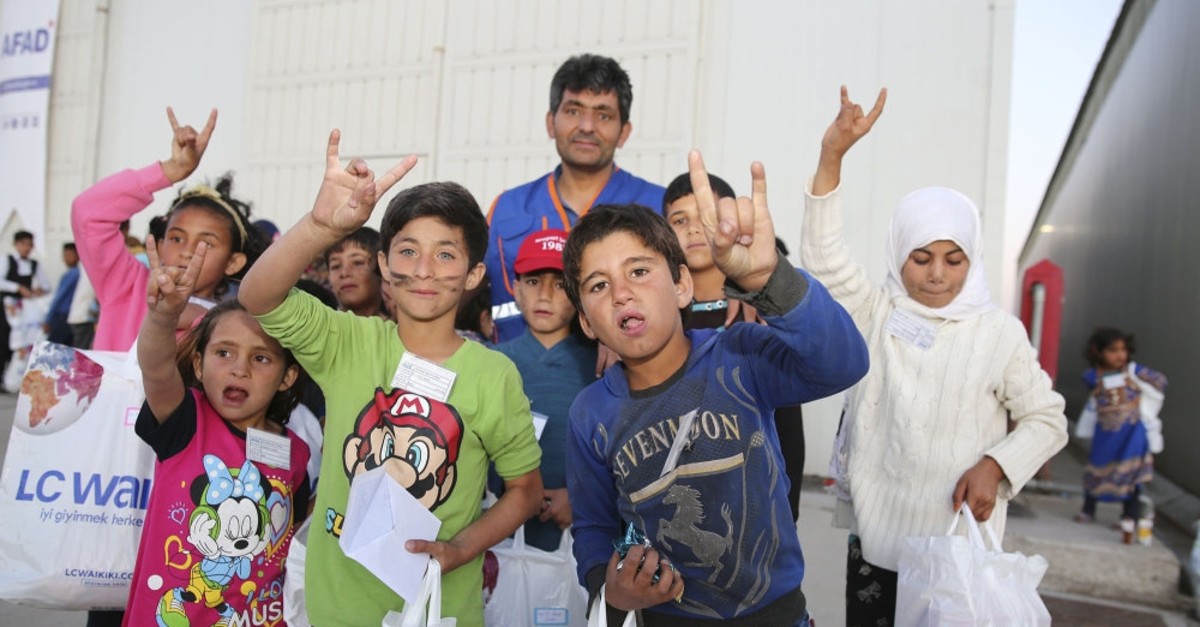 Turkey has been hosting 3.6 Syrian refugees, more than 300,000 of whom returned to areas liberated following operations in northern Syria.
by daily sabah
Jul 27, 2019 12:16 am

Ankara is determined to clear the PKK's Syrian affiliate YPG from its borders by establishing a safe zone, no matter what the U.S. says, President Recep Tayyip Erdoğan said

Turkey is determined to destroy the terror corridor east of the Euphrates in northern Syria regardless of how talks conclude with the United States on a planned safe zone in the country's north, President Recep Tayyip Erdoğan said Friday.

"Those who put their trust in foreign powers in the region will be put underground," Erdoğan said. "We will find a lasting solution to terror," he added. Calling on the Kurdish population in northern Syria, Erdoğan said the PKK's Syrian affiliate, the People's Protection Units (YPG), could be eliminated through joint efforts. 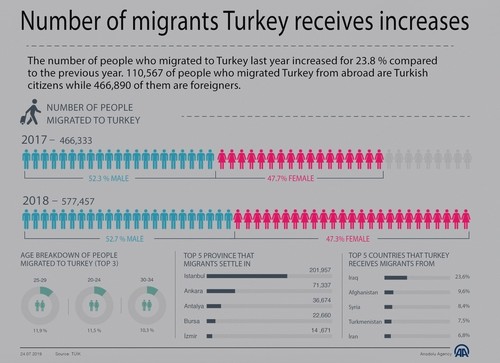 Ties between Ankara and Washington have been strained over a host of issues. Turkey has also been infuriated with the U.S. support for the YPG militia in Syria, a main U.S. ally in the region Ankara regards as the Syrian branch of the internationally recognized PKK terror organization.

nned safe zone in the region, saying it had run "out of patience."

Turkey has informed the U.S. delegation about its views and proposals regarding the Syria safe zone and will take the initiative if necessary, Defense Minister Hulusi Akar said Thursday. Akar held a meeting with the Turkish chief of general staff and army, navy and air force commanders at the Defense Ministry following his meeting with the delegation led by U.S. Special Representative on Syria James Jeffrey, who came to Turkey on Monday to discuss the establishment of a safe zone in Syria.

"We expect them [the U.S.] to analyze the proposals and give us a response as soon as possible," Akar told the meeting, according to a statement released by the ministry.

"When we manage to achieve a safe zone in the area, I believe that we will no longer have any problem with Qandil [the mountains where PKK terrorists are located]," Erdoğan noted.

Since 2016, Turkey has conducted two major military operations in northwestern Syria, Euphrates Shield and Olive Branch, to purge the region of terrorist groups, most notably the YPG.

Thanks to these operations, areas like al-Bab, Afrin and Azaz were liberated from YPG and Daesh terrorists, making it possible for Syrians who fled the violence to return home.

In February, the Interior Ministry said more than more than 300,000 Syrian refugees were able to return to their hometowns, which were liberated from terrorist elements through Turkish military operations. Turkey is aiming to facilitate a larger scale return of refugees by establishing a safe zone in northern Syria.

Turkey had long signaled a possible offensive in areas held by the YPG east of the Euphrates. However, last December the government decided to postpone the operation after U.S. President Donald Trump decided that Washington, the main backer of the terrorist group, would withdraw its troops from Syria.

The withdrawal decision was quickly interpreted as an intention to halt U.S. support for the YPG. Yet, in the face of mounting hints that the country will maintain its support for the terrorist organization and contradictory statements from officials on the pullout process, officials from Ankara and Washington have been discussing setting up a 32-kilometer-deep safe zone to ease Turkey's security concerns. However, no actions were taken also on this issue.

When it comes to Idlib, Erdoğan said they have an obligation to provide security.

"Neither the regime nor the U.S. may need this [stability in Idlib]. However, we need it immediately. No other country in the world has hosted a refugee group that equals 5 percent of its own population. They would not," the president said, adding that Turkey, despite not receiving support from other countries, saved the morality of humanity by taking on this sacrifice.

Since the Syrian regime military launched its offensive in Idlib in late April, more than 600 people have been killed and hundreds of thousands have been displaced, according to the Syrian Observatory for Human Rights. Despite the Astana meeting between Turkey, Russia and Iran in May 2017 designating Idlib as a de-escalation zone, the regime has consistently broken the agreement with acts of aggression. This creates a big problem for Turkey since it poses the threat of a new refugee flow to the country, which is already overloaded. According to Interior Ministry figures, the number of refugees was 4.2 million in 2017 and has now reached 4.9 million. While 3.6 million Syrians are living in Turkey, more than 415,000 Syrians have been born in Turkey since the start of the civil war in 2011.

Ankara has spent nearly $40 billion so far, while it has only received about 6 billion euros ($6.68 billion) of support from the international community. Despite some factions in Turkey becoming restive due to a record number of refugees in various cities and the large amount of money spent on them amid deteriorating economic conditions in the country, the government insists on keeping its open-door policy along with maximum support for refugees.

He also touched on the fact that despite not supporting the refugees, Western countries have not hesitated to send truckloads of equipment and weapons to the YPG for free. "Who gives these? The ones who pretend to be our strategic allies," he said.

The U.S.' Syria policy, especially its military support for YPG terrorists, has been a cause of tension between Ankara and Washington. Ankara argues that one terrorist group cannot be used to fight another. Turkey sees the YPG as an extension of the PKK, which has claimed the lives of more than 40,000 people in its 30-year terror campaign against Turkey.

The U.S., however, while listing the PKK as a terrorist group, maintains steadfast military support for the terrorist organization by providing truckloads of military supplies and military training under the pretext of fighting Daesh at the expense of losing its NATO ally.

Regarding Operation Claw in northern Iraq, Erdoğan said the recent attack by PKK terrorists in Irbil that killed a Turkish diplomat proves how right the country was in launching these operations.

"We have captured all the terrorists that killed our consulate personnel," the president asserted. The first Operation Claw, which was launched on May 27, aimed to prevent infiltration by PKK terrorists onto Turkish soil from Hakurk and to spoil their settlement plans in the area. Last week, Turkey launched counter-terror Operation Claw-2 as a follow-up to the successfully ongoing Claw-1 operation, which revealed new information on terrorist activity, according to the ministry.

The Hakurk region is among the main locations PKK terrorists use to infiltrate Turkey or attack Turkish border outposts. The area is located 30 to 40 kilometers south of the Derecik district of southeastern Hakkari province, bordering Iraq, and currently serving as the main base for terrorists between their headquarters in the Qandil Mountains near the border with Iran and Turkey.

Meanwhile, according to reports, two senior PKK terrorists who planned the attack against the Turkish diplomat were killed in two separate operations in Iraq. The first one took place in Duhok on July 18, one day after the brutal assassination of a Turkish diplomat in an upscale restaurant in Irbil. Both were allegedly senior figures in the PKK terrorist organization in Iraq. The second operation took place in northern Batika, Iraq, six days after the first one on July 24. Security forces reportedly hit the vehicle carrying the terrorist mastermind and his guards.

The president also reiterated that Turkey continues to see the EU as its biggest trade partner, and a fellow traveler that shares the burden of humanitarian and historical responsibilities. "Yet," he said, "The way to pursue this understanding is for the EU to have a similar stance toward Turkey as well."

Indicating that the EU has failed to keep its promises regarding full membership of Turkey, Erdoğan said the failed promises also included those given in the 2016 refugee deal.

Ankara and Brussels signed an agreement in 2016 to find a solution to the influx of refugees heading to the union. According to the deal, Turkey was promised 6 billion euros in financial aid, which was initially designed to be given to the country in two stages and be used by the Turkish government to finance projects for Syrian refugees. Visa freedom for Turkish citizens was also promised under the agreement.

Last, the customs union was also to be updated in accordance with the deal. In exchange for these promises by the EU, Turkey took the responsibility of discouraging irregular migration through the Aegean Sea by taking stricter measures against human traffickers and improving the conditions of more than 3 million Syrians living in Turkey.

Erdoğan also said that the future of Europe is under threat by rising anti-Muslim and anti-Turkish sentiments.

"Turkey is still the Europe's closest, strongest, most beneficial friendship candidate with the hugest potential in every respect," he noted.

Anti-Muslim hatred has been on the rise for years. Far-right extremism and xenophobia have fueled anti-Muslim hatred in Western countries where terror attacks by Daesh and al-Qaeda are used as an excuse to legitimize those views. This trend of intolerance has triggered deadly attacks against Muslims and immigrants since then.

AK Party congress to be held in autumn

When it comes to domestic politics, Erdoğan said the 7th Ordinary Congress of the ruling Justice and Development Party (AK Party) would take place in the autumn.

"Some have been founding parties. I do not care about that at all," Erdoğan said regarding the rumors that former AK Party founders have been involved in such activities, adding that those who are engaged in such "betrayals" would get their response.

Noting that the next elections are expected to take place in 2023, Erdoğan said that until this date, high-level work would take place in the AK Party.

"We want to face our people as a brand new AK Party with the excitement of our first days and the experience of 22 years of AK Party rule in those elections," Erdoğan said, indicating that the party's main duty is to serve the people. He also called on its party organizations and party members to keep in touch with the people and to not ever lose their emotional connection with them while serving their demands. The president also said that by the next polls, there would be no one left that the AK Party hasn't reached out to.

The AK Party has a tradition of rejuvenating the party with a more dynamic team that consists of experienced elders and younger members when necessary. Erdoğan had used the term "metal fatigue" before, pointing to the need for reviving the party by eliminating some members in the party who have lost their energy to perform what is required. As part of the rejuvenation efforts, a number of party members and mayors of key provinces resigned.

The AK Party is a very successful political party that has won every election since it was founded in 2001. Having millions of members, its voter base also includes millions of people from different political backgrounds. Since it won the majority of votes in its first election, it has sequentially increased its voters in all subsequent elections. Therefore, it is quite possible and normal for some party members to have lost the energy needed to perform effectively.

Erdoğan also pointed to the recent manifesto that was released by the party for the municipal administrations of the party that consists of 11 articles. He said with this document, the AK Party promises long-term city plans in accordance with equity as well as the solving of problems regarding infrastructure in every province. He further reiterated that they place great importance on maintaining environmentally friendly municipalities in all 755 municipalities that they run.