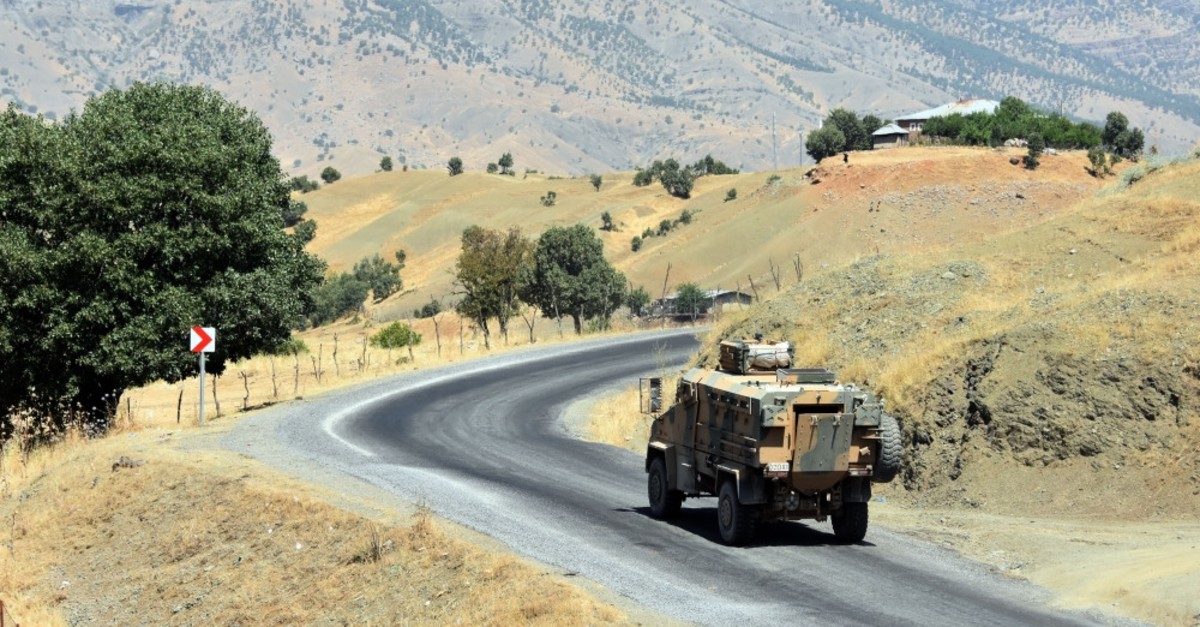 Turkey's Operation Claw aims to eradicate the PKK presence in the Qandil Mountains, which has been the PKK headquarters since the 1990s.
by Daily Sabah Jul 30, 2019 12:15 am

The presence of high-level PKK terrorists, and the YPG's oppressive practices against local Arab community threaten both security and stability in northeastern Syria

It is not news that the PKK poses a threat to the whole region. From Iraq to Syria and Turkey to Iran, its terrorists spread all around these countries, causing suffering to all of their peoples.

A recent article from the U.S.-based Carnegie Institute School of Allied Health Technology reveals details of the spread of the PKK to the region. According to the article, terrorists are being raised in Iraq's Qandil mountains and then moved to northern Syria to participate in the terrorist organization's Syrian wing People's Protection Units (YPG).

Evidently, the PKK leadership is trying to gain the decision-making power in northeastern Syria.

"These are comprised of men and women trained in the Qandil mountains and who were active in the insurgency against Turkey or in mobilizing on behalf of the PKK in Europe," the article writes.

The Qandil area has frequently been hit by the Turkish Armed Forces (TSK) in the last decades, yet a ground operation had not been launched in recent years.

Qandil became the PKK's main headquarters in the 1990s after it used the Bekaa Valley of Lebanon as training grounds for many years.

The territorial destruction of Daesh in March 2019 led to the Syrian Democratic Forces (SDF), which is controlled by the YPG terrorist group in Syria. The SDF controls almost a third of Syrian land where millions of people who are mostly non-Kurds live.

According to locals in Arab-majority cities under SDF control, Arabs are not included in the management and governance of the land they are living in, which breeds discontent among the people.

The decision-making authority is almost completely in the hands of the PKK.

"They come down from the [Qandil] mountains and try to rule our areas, which they do not understand," said the leader of a major tribe in Deir el-Zour last week in an interview.

In the article headlined "Kurdish-Arab Power Struggle in Northeastern Syria," it is argued that the resurgence of Daesh in Iraq originated from Sunni disenfranchisement and that the scenario could repeat itself in Syria. The Arabs in the region view the SDF as a foreign occupation.

"Empowerment of local communities would increase popular buy-in among members of all communities, encourage Arabs to participate in rebuilding their communities, and possibly help limit ISIS' resurrection in Syria," it said, using a different acronym for Daesh.

The article also stressed the point that if the situation goes on as it is now and nothing is done, major problems and even the resurrection of Daesh could possibly occur. The Arab inhabitants and tribes of the province have long been disgruntled with the YPG's Kurdish officials' discriminatory policies against them in local administrations and the deficiency of basic services, despite a huge amount of oil revenue siphoned by the YPG in the oil trade with the Bashar Assad regime.

The U.S.-backed YPG has long had serious problems with the local Arab tribes, especially in northern Syria. The oppressive practices of the terrorist group, including arbitrary arrests and forced conscription, often cause trouble among mostly Arab-populated cities in the country. Since the beginning of the YPG's occupation, Arab tribal leaders from different regions of Syria have come together to discuss possible steps to take against the YPG, which they blame for destroying the Arab identity in the lands they invade. The PKK was founded in 1978 and carried out a decades-long campaign against the Turkish state, which led to the deaths of more than 40,000 people. Since the terrorist group began to gain power and lands in the area and caused hundreds of thousands of people to suffer, Turkey has launched many initiatives to both secure the southern border and to establish peace and security for the residents in the region who flooded to Turkey seeking refuge from the constant attacks.

The first extensive operation was carried out in May 1983, when 5,000 Turkish soldiers crossed the Iraq border and advanced five kilometers. After a land operation on the Qandil mountains and destroying PKK hideouts, they retreated.

In the mid-1990s, the operations intensified due to increased PKK attacks and infiltration attempts near border towns that cost hundreds of Turkish soldiers' lives.

In May 1995, the Turkish army launched Operation Steel with the participation of 35,000 personnel. The operation was followed by Operation Claw which was launched on May 27, 2019 to entirely eliminate the presence of the terrorist organization in northern Iraq. On July 13, the TSK launched Operation Claw-2 as a follow up to the successful Claw-1.