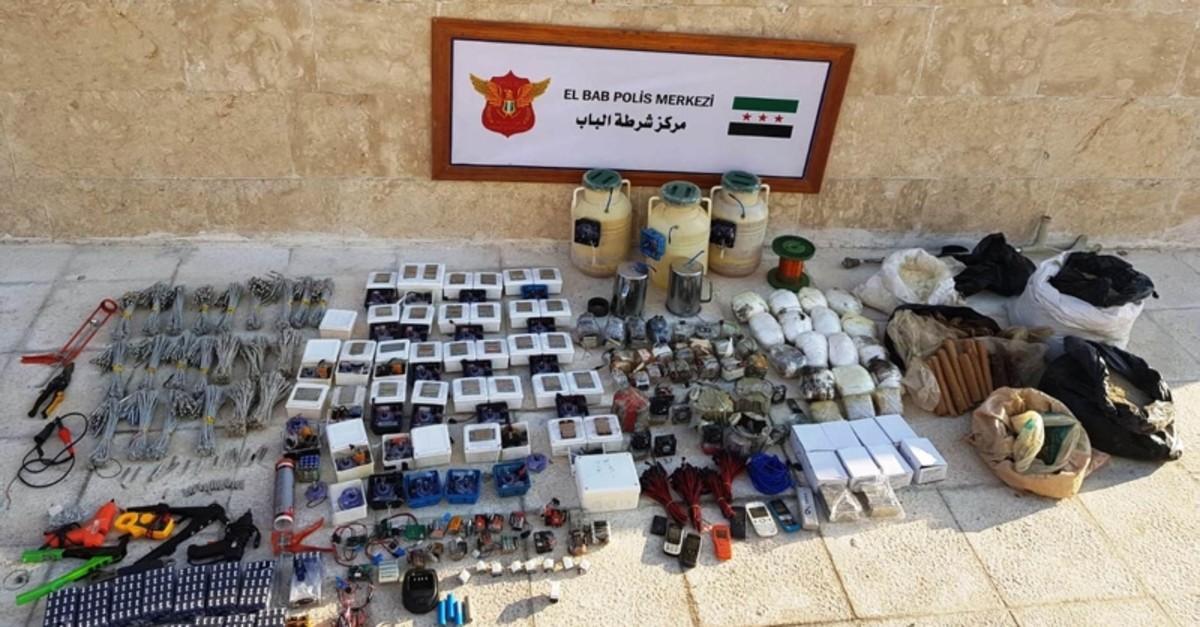 Acting upon information that Daesh terrorists have a bomb workshop in the town center, MIT and gendarmerie units launched the raid, which was joined by bomb disposal experts and local security forces, the Ministry of Interior said in a statement Saturday.

Terrorists plotting to carry out many bomb attacks in Turkey and Syria were apprehended beforehand, the statement said.

Security forces also found 833 electric fuses, 300 batteries and other equipment and suicide vests enough to prepare some 480 other explosive devices.

Al-Bab, an important crossroads and settlement in northeastern Aleppo province, was liberated from the four-year-long cruel Daesh rule on Feb. 22, 2017, by the Turkish Armed Forces (TSK) and Free Syrian Army (FSA) fighters as part of the Operation Euphrates Shield launched on Aug. 24, 2016, to clear the terrorist group from Turkey's border regions. Due to its strategic importance, al-Bab witnessed the fiercest clashes between the Daesh terrorists and Turkish forces, especially at the Sheikh Aqeel district overlooking the town.

The operation also drove Daesh terrorists out of Jarablus, al-Rai and Azaz district near the border with Turkey and prevented PKK terrorist group's Syrian affiliate Democratic Union Party (PYD) and its People's Protection Units (YPG) militia from unifying its so-called cantons in northern Syria. It also established a terrorism-free zone in Syria that is more than 2,000 square kilometers, helping more than 400,000 Syrian nationals inside Turkey to return to their homeland while providing safety for hundreds of thousands of others displaced during the 8-year-long Syrian civil war and living in refugee camps near the border.

More than 300 people have been killed in attacks claimed by Daesh in Turkey, where the terrorist group has targeted civilians in suicide bombings, as well as rocket and gun attacks. Turkish security forces have been involved in a long-running campaign to thwart the Daesh threat. Some 2,000 people have been arrested and 7,000 others deported in operations against Daesh in Turkey, while around 70,000 people have been denied entry to Turkey over their suspected links to the terrorist group. Security forces have also foiled at least 10 attack plots. Figures show that some 18,500 suspects are currently being monitored for links to the terrorist organization after being identified at airports upon arrival.