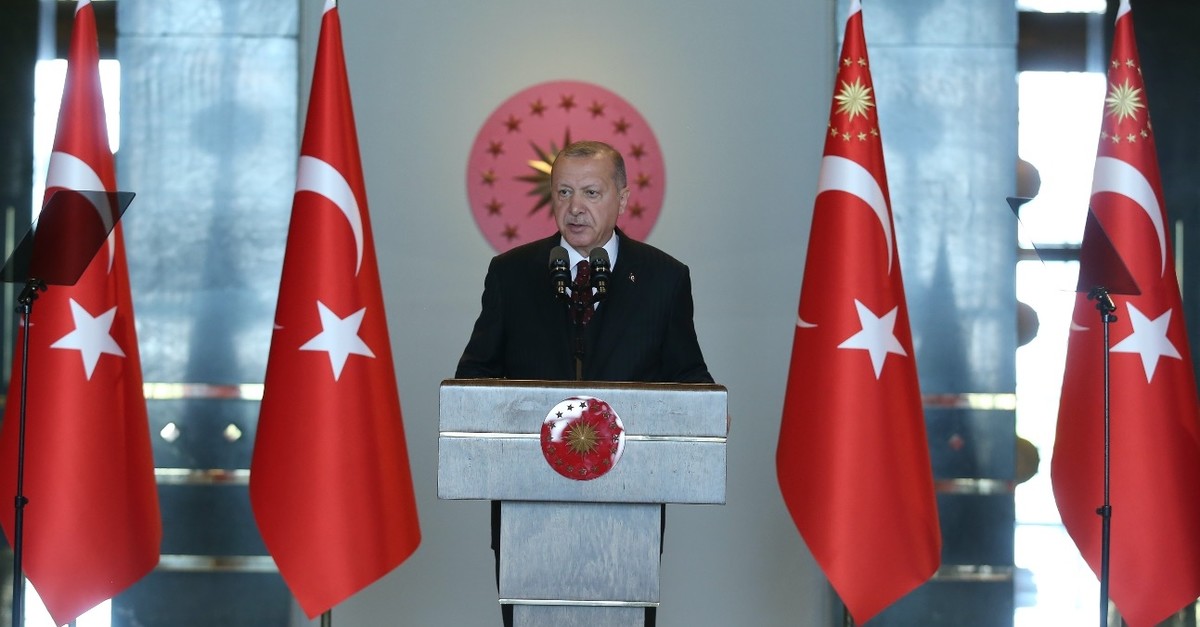 What began with Operation Euphrates Shield and Operation Olive Branch will soon move into the next stage to eliminate the PKK terrorist group's Syrian affiliate, the People's Protection Units (YPG), from northern Syria and establish a safe zone in the region. "We will move the process which we started with the Euphrates Shield and Olive Branch operations to a different phase very soon," Erdoğan said yesterday at the 11th annual Ambassadors' Conference in the capital Ankara. While expressing the country's determination to provide stability and peace in the region, the president also reiterated Turkey's expectations from its NATO ally, the United States. Erdoğan said Washington needs to take steps that are "worthy of a true ally," primarily in regard to partnering in the fight against terror.

"We will defend our national interests by means of soft power, forceful diplomacy or realpolitik as necessary (in Syria)," he added, implying that the country will do whatever it takes to bring peace to the region whether U.S. supports their initiative or not. He further said that Turkey expects the U.S. to stop arming the YPG in Syria. The president explained that Turkey will not feel safe until the supply of heavy weapons to terrorists at its southern border is eliminated. Turkey carried out two cross-border operations west of the Euphrates River, Operation Euphrates Shield launched in August 2016 and Operation Olive Branch in January 2018, to drive terrorist groups, including the YPG and Daesh, from its borders.

This time, Turkey aims to drain the terror swamp near its border, protect Syria's territorial integrity and ensure political stability with a possible operation east of the Euphrates River to eliminate YPG terrorists.

PKK WILL BE ELIMINATED FROM IRAQ

Airstrikes were carried out in the Metina and Gara regions as part of Operation Claw, the ministry said on Twitter.

Turkey had previously warned the KRG and Iraqi governments numerous times about eliminating the PKK's presence to maintain Turkey's border security. Despite top officials from both governments expressing their discomfort with PKK camps and activities, saying that they won't allow militants to attack Turkey from their soil, no serious action was taken in this regard.

US plans to prevent Turkish counterterror op in Syria

Erdoğan's comments came shortly after U.S. Defense Secretary Mark Esper expressed Washington's intention to prevent a cross-border counterterrorism operation by Turkish forces in northern Syria, where the U.S. has backed the YPG initially in its fight against the Daesh terror group.

Previously on Sunday, Erdoğan said that Turkey will enter the area east of the Euphrates River and has already notified the United States and Russia on the issue.

"We entered Afrin, Jarablus, al-Bab. Now we will enter the (area) east of the Euphrates. We shared this with Russia and the U.S. As long as harassment fire continues, we cannot remain silent," Erdoğan had stressed.

Ankara has been patient for some time, but its "patience has an end," he added.

The Turkish military has recently increased its deployment near the Syrian border, including heavy weaponry, armored vehicles and tanks, as it prepares for an imminent offensive against the PKK terrorist group's Syrian branch, the YPG.

Turkey has long been delaying a possible operation east of the Euphrates to end the presence of U.S.-backed YPG terrorists, which Ankara says pose a grave security threat due to their affiliation with the PKK that is responsible for the deaths of 40,000 in its nearly 40 years of terrorist attacks against the state.

Months long talks between Turkey and the U.S. regarding a safe zone in northern Syria have failed to bear fruit. Foreign Minister Mevlüt Çavuşoğlu said if the planned safe zone is not established and threats to Turkey continue, an operation will be launched east of the Euphrates River to oust the YPG from the region.

Meanwhile, a meeting between Turkish and U.S. military officials to discuss the establishment of a safe zone in northern Syria resumed yesterday in the capital Ankara, according to the Turkish National Defense Ministry.

The meeting started at 10:30 a.m. local time, the ministry said in a tweet.

Turkey expects the creation of a 20-mile (32-kilometer) safe zone in northern Syria and has stressed that it wants the YPG terror group cleared in the region.

Ankara and Washington have yet to hammer out an agreement on the safe zone.Turkey's Foreign Ministry said Friday that Ankara has "limited" patience and if efforts to find common ground with the U.S. fail, Ankara will have to create a safe zone in Syria on its own.

The U.S. decided in July to remove its Turkish partners from the $428 billion F-35 stealth fighter jet program after Ankara asserted its sovereign right to purchase the S-400 system. The U.S. says its NATO ally's purchase of the Russian system endangers the alliance's military intelligence, particularly in the development of the F-35 jets, a claim Ankara rejects.

Erdoğan also touched on the rise of racially motivated terrorism, stating that the mass shootings in the U.S. over the weekend "show the bloody face of racist terrorism."

In his speech at the Ambassadors' Conference Tuesday, President Erdoğan also said Ankara expects clear steps from Washington regarding the extradition of Gülenist Terror Group (FETÖ) head Fetullah Gülen, one of Turkey's most wanted terrorists.

FETÖ orchestrated the failed coup attempt in July 2016, during which 251 civilians were killed and some 2,200 others were injured. FETÖ was also behind a long-running campaign to overthrow the state through the infiltration of the police, military and judiciary.

An unknown number of Gülenists, mostly high-ranking figures, fled Turkey when the coup attempt was thwarted. A large number of Gülenists had already left the country prior to the coup attempt after Turkish prosecutors launched investigations into other crimes by the terrorist group. Despite Turkey's extradition requests and bilateral legal agreements, many FETÖ members still enjoy their lives in different countries around the world.

Within 24 hours, 31 people were killed in two separate mass shootings in El Paso, Texas, and Dayton, Ohio, carried out by two white men in their early 20s. Initial investigations show the El Paso terrorist traveled to the city on the Mexican border to carry out the attack against Hispanics.

Erdoğan urged that these attackers not be assessed by their ethnicity, color or language, arguing t

hat they are no different than any other terrorist. He also drew attention to the frequent threats faced by Turkish citizens living abroad, especially at Muslim places of worship. "It is our responsibility to prevent these racist attacks and find the perpetrators," he said.

Commenting on the European Union, Erdoğan said that if the EU wants to be a global actor, they should win over Turkey. "Turkey's membership must not be sacrificed for the ambitions of several countries," he added.

The president added that the trouble in Palestine was a never-healing wound worsened by Israel's unilateral actions, which jeopardize the two-state solution.

"Establishment of an independent and sovereign Palestinian state based on 1967 borders with east Jerusalem as capital is not a preference but obligation," he said.

"Turkey will continue to defend justice and righteousness on the Palestine issue until the very end. We will not abandon our first qibla, our beloved Jerusalem to the mercy of occupiers," he asserted.

Erdoğan also touched upon the suspicious death of Egypt's first democratically elected President Mohammed Morsi and the killing of Saudi dissident journalist Jamal Khashoggi. "These two cases are the litmus test for the international community. If the doubts on the death of Morsi would not be overcome and those who are responsible for the murder of Khashoggi would not be accountable before justice, consciences will not be comfortable," said Erdoğan. He also expressed his expectations that Turkish ambassadors to act in line with this vision and perspective to always support justice and fairness.