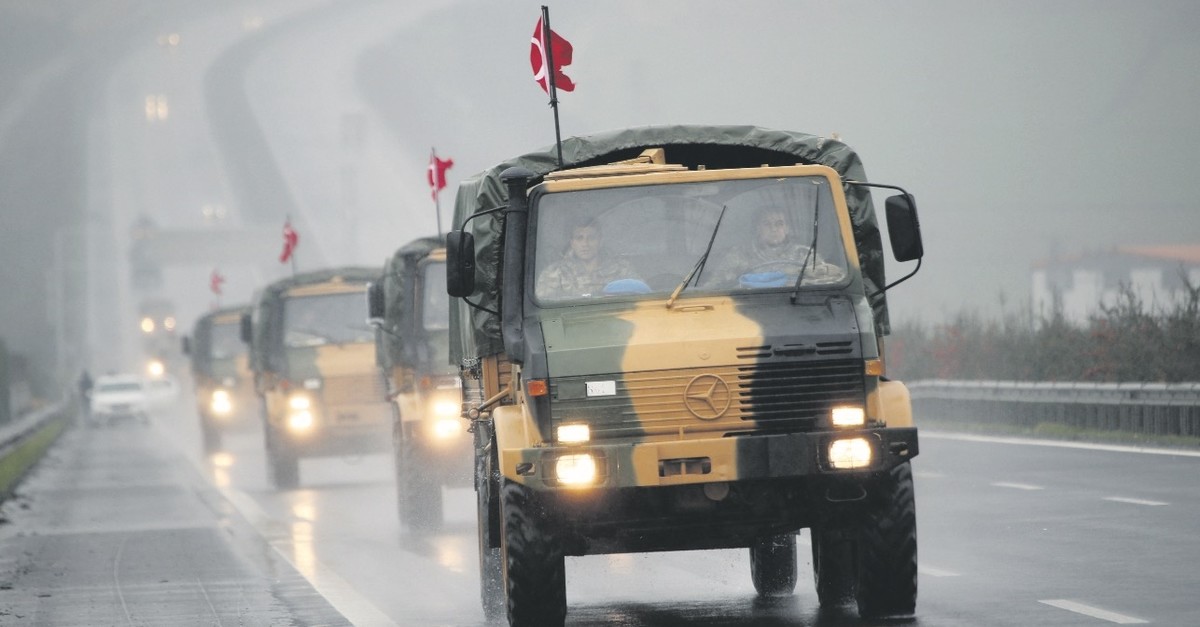 Turkey expects the creation of a 32-kilometer safe zone along its borders in northern Syria, which must be cleared of the PKKu2019s Syrian affiliate, the Peopleu2019s Protection Units (YPG).
by Daily Sabah with AA Aug 15, 2019 12:25 am

With the establishment of a safe zone in northern Syria with the aim of getting rid of the People's Protection Units (YPG) and PKK terrorists in the region, Turkey hopes to resettle a portion of displaced Syrians currently living in the country. Turkish military officials and their U.S. counterparts last Wednesday discussed details of the planned safe zone, saying that both parties agreed on turning the area into a "peace corridor" and that measures would be taken to ensure the return of Syrians forced out of their country by violence. The agreement also envisaged to set up necessary security measures to address Turkey's security concerns. The officials also planned for a Joint Operations Center to be established in Turkey to coordinate and manage the establishment of the safe zone.

Turkey expects the creation of a 32-kilometer safe zone in northern Syria, which must be cleared of the PKK's Syrian affiliate YPG. Ankara has warned that if the establishment of such a zone is delayed, it will take cross-border military action to remove the terrorist threat at its southern border.

Mohammad al-Saadi, 42, who lives in Ankara, described how he longed for his homeland to Anadolu Agency (AA).

"It has been over four years since we moved here with my family. We are provided many opportunities, but we long for our homeland," he said. Saadi said he used to live in the northwestern Syrian town of Idlib, but that he had to abandon it because of regular airstrikes by the regime and Russian jets. "You cannot imagine how difficult it is to sleep while you are listening to the sonic booms of fighter jets, explosions and gunfire," he said, adding that almost all Syrian citizens living in opposition-controlled regions suffered psychological disorders due to the never-ending war campaign of the regime and its allies.

When asked if he would consider returning to Syria once a safe zone was established in the northern region of the country, he replied: "It is not just me, there are at least a dozen [people] I know who would immediately return if that was the case. It [northern Syria] might not be my hometown, but it is part of my country."

'I don't want to be a foreigner'

Another Syrian in Turkey, Omar al-Maher said he used to work as a mechanic in Homs until 2014. However, he was forced to abandon his home for Idlib after clashes between opposition forces and the regime broke out, before later coming to Turkey.

"One cannot describe how it feels to live under constant threat of death. We used to lead a modest life before, however, everything changed in the coming years," he lamented. "I even miss the difficult workdays I used to complain about all day long."

"My family and I would return home, it does not matter whether it is north or south, if we had a chance. Turks have been good to us, which is a fact. However, I don't want to be foreigner anywhere, Turkey or Europe. We just want to return, it is so difficult to be away from your homeland," he said.

A Syrian woman aged 29, who spoke on the condition of anonymity, claimed many of the people taking shelter in Turkey would return to their homeland once the territory was cleared of terrorist elements and Syrians' security was guaranteed. "There are people [terror groups] with ill intentions, they must leave first so that we can lead a normal life. Nobody would like to live in a place where bullets could target you any second," she said.

"All I want is to lead a normal life in my country, and raise my children without thinking about their security while they are out playing football," she said. "It is one's right to live without fear, I am a human being, is it too much to ask for a normal life?"

Vanessa Tinker, an academic at the Social Sciences University of Ankara, argued that displaced Syrians could face initial difficulty while adapting to the region and that their security must be ensured to ease this process. "Setting aside the living conditions, ongoing security threats are more troubling. Despite the agreement between Turkey and the U.S. Wednesday to create a safe zone, there has been no information about what this deal would consist of," said Tinker, an expert in conflict resolution.

She added that the relocation of Syrians in Turkey to northern Syria following an imminent operation should be meticulously arranged as a collision – between Kurdish and Arab populations – might trigger civilian unrest in the region.

According to the U.N., over 5.6 million have fled Syria since the eruption of the civil war in 2011. Among the countries hosting Syrians, Turkey has welcomed the most with 3.6 million of them within its borders. Other major host countries are Lebanon, Jordan, Iraq and Egypt, in order of number of Syrians hosted.

Meanwhile, preparations for an operations center between Washington and Ankara to establish a safe zone in Syria have begun, Turkey's National Defense Ministry announced Tuesday.

The ministry said in a statement that efforts are ongoing for the Joint Operations Center to enter service in the province of Şanlıurfa, southeastern Turkey, as part of the safe zone in northern Syria planned in coordination with the U.S.

On Monday, a six-member U.S. team arrived in Şanlıurfa province to work on the center's establishment.

The ministry underlined that efforts were underway for the center's establishment and operation "as soon as possible."

The U.S. has primarily partnered with the YPG in northeastern Syria in the anti-Daesh fight. Turkey strongly opposes the YPG's presence in Manbij, which has been a major sticking point in strained Turkey-U.S. relations due to the latter's support for the YPG under the pretext of fighting Daesh. The U.S. has provided military training and given truckloads of military support to the YPG, despite its NATO ally's security concerns.

To reduce tensions, Turkey and the U.S. agreed on a road map in June 2018 foreseeing the withdrawal of the YPG from Manbij and installing joint Turkish-American patrols, which began in November. However, the process has been sluggish as the terrorist group was still present in the city despite the three-month timetable set for implementing the deal. In the last two years, Turkey's Euphrates Shield and Olive Branch operations liberated the region from YPG, PKK and Daesh terrorists, allowing hundreds of thousands of displaced civilians to return to their homes.