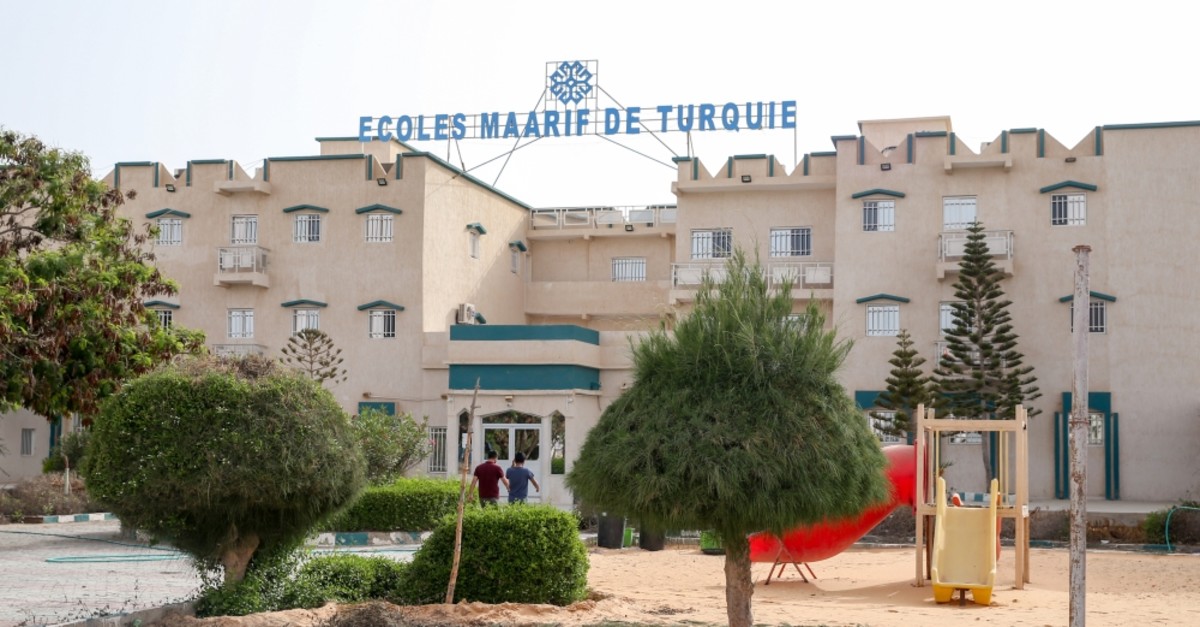 Ecoles Maarif de Turquie in Mauritania capital Nouakchott has been transferred to Turkey's Maarif Foundation as of Sept. 18, 2017.
by Daily Sabah Aug 31, 2019 12:25 am

Former FETÖ schools are being revamped around the globe under Turkey's administration, with the latest reports coming from Mauritania, where a mission is overseeing widespread success in student achievement

Turkey's international efforts to assume control of schools linked to the Gülenist Terror Group (FETÖ) continues with success under the leadership of the state-backed Maarif Foundation.

The foundation has successfully turned many of these schools into modern, scientific institutions with level respectability, unprecedented due to the terrorist group's policies.

The latest success stories come from the western African country of Mauritania, where an overwhelming majority of students have managed to enroll in colleges, despite it only being a year since the schools were transferred.

Although the number of graduates was relatively low, only 21, the fact that 20 or 95% of them have gotten into the universities marks a remarkable success rate – one of the highest in the country.

Three out of these 20 students have also received scholarships, while 14 of them traveled to Turkey for their college education. This year was also quite successful for the school as 32 students were accepted to colleges. Thanks to this success, the schools in Mauritania have been able to become self-sufficient and do not need outside monetary support. The schools also managed to increase their enrollment following the students' overall success.

Speaking to Anadolu Agency (AA), Adil Tanış, Maarif Foundation's Mauritania director, said after a long struggle, they managed to cancel FETÖ's education license in the country on Sept. 5, 2017. On Sept. 18, 2017, the foundation received its education license and started its activities.

"When we took over the schools, they were a mess. The Turkish Maarif Foundation brought in 17 personnel from Turkey. Along with our staff, we worked hard to get the three buildings ready for the 2017-2018 education semester," said Tanış, adding that a total of three buildings and seven schools have been transferred to the foundation.

"When FETÖ figured out that the schools would be transferred, they wrecked everything. We cleaned up the mess and with the support of our state, have built a serious institution," he said. "Even the school materials have also been brought from Turkey," he added.

According to Tanış, Mauritanian people's interest in the schools has increased thanks to the success of the schools and the visit of President Recep Tayyip Erdoğan.

"Currently, by providing much higher quality education than Mauritanian standards, we are competing with schools run by other foreign missions. We had a total of 360 students in three schools in the first year. We have rented three more buildings and raised that number to 930. We are aiming for 2,000 students next year," said Tanış, highlighting that they have restored the schools from top to bottom and improved them with laboratories and other amenities.

Regarding Mauritania's approach to Turkey and the Turks, Tanış said, "They are very fond of Turkish people."

"FETÖ exploited this fondness. When there were 2,300 students at the FETÖ schools in Mauritania before the Dec. 17-Dec.25 incidents, almost 1,000 Mauritanians, who closely follow developments in Turkey, quietly stopped sending their children to these schools," he said.

"Since the foundation took over the schools, we have tried to clear all the negative traces of FETÖ and demonstrate Anatolian wisdom and our educational system," he added.

Today, the Maarif Foundation runs 10 schools, in six buildings with 935 students, in Mauritania.

FETÖ has a considerable presence abroad, particularly in the U.S., where it runs a chain of charter schools that serve as a revenue stream for the terrorist group.

The U.S. is home to a large community of Gülenists, including the group's leader Fetullah Gülen, who has lived in a self-imposed exile on a secluded compound in the U.S. state of Pennsylvania since 1999.

While the Maarif Foundation has representatives in 55 countries, it has also made official contact with 99 countries for educational activities. It educates more than 30,000 students at 292 schools in 35 countries.

The foundation has also signed protocols with another 41 countries and is soon planning to start educational activities. It also runs 41 dormitories in different countries. Alongside opening new schools worldwide, the Maarif Foundation has taken control of FETÖ-linked educational institutions after the group orchestrated a coup attempt on July 15, 2016, killing 251 people and injuring nearly 2,200.