Kurdish mothers determined to not leave their sons to PKK 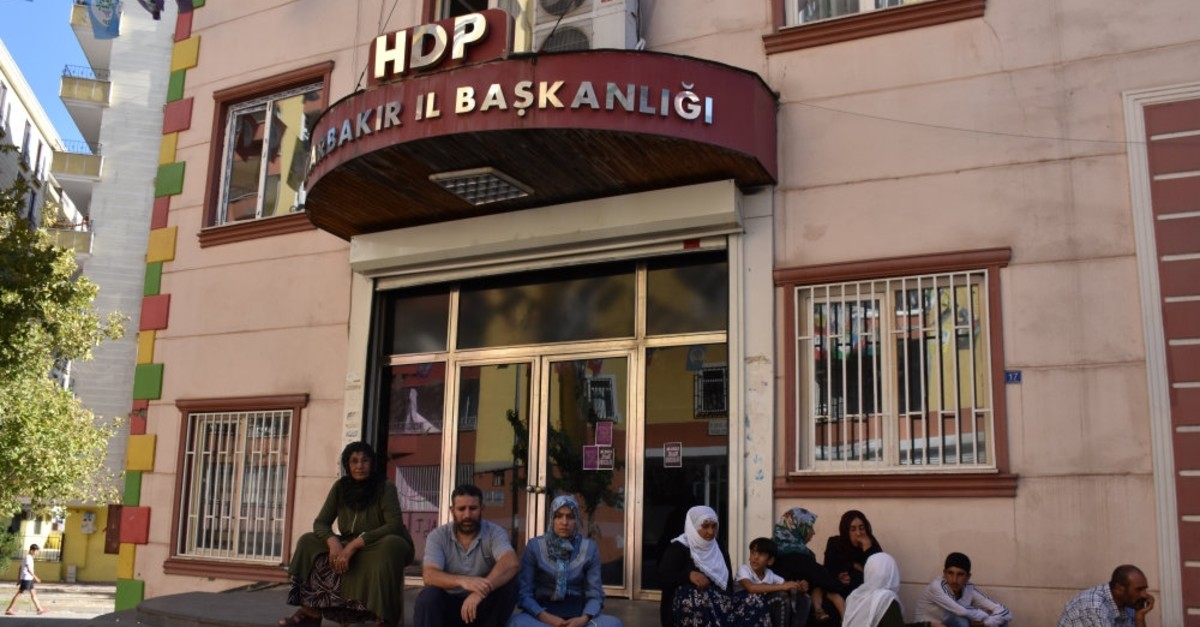 Kurdish mothers demand that their sons, abducted by PKK, be returned and are pressuring the terrorist group through sit-in protests, which have been going on for two weeks now

On Wednesday, "I will not leave my son with them [the PKK]," said Ayşegül Biçer, a 35 year old mother who has been conducting a sit-in protest in front of the pro-PKK Peoples' Democratic Party (HDP)'s headquarters in southeastern province, crying to get back with her son, abducted by the PKK terrorists 10 months ago. Biçer's shout, however, is not specific only to her case, but instead is becoming a voice for all the other mothers who have been keeping guard at the same spot for more than two weeks now. Everything has started two weeks ago with a cry of another mother, Hacire Akar, who had launched the sit-in protest in front of the HDP provincial organization for her 21-year-old son. It took three days for Akar to reach her son and complete her mission as a sorrowful mother.

However, her move triggered other mothers who have been suffering from the same PKK brutality as well. Soon after, more mothers started to protest the HDP for cooperating with PKK in abducting their sons and taking them to the mountains. Biçer family is only one of those families who follows the footsteps of Akar for their 18-year-old son Mustafa. "Why is my son holding a gun, when he could instead hold a pen," protested the mother Biçer. "He left the house on Saturday morning on Nov. 17, 2018. Two days later, he called us. When he called us, we were been informed that he is with the YPG. Some YPG figures talked with us," Biçer said, referring to the PKK's Syrian affiliation People's Protection Units (YPG). She also underlined that she has been fighting against these groups ever since and will continue to do so.

"He left the house on Saturday morning on Nov. 17, 2018. Two days later, he called us. When he called us, we were informed that he is with the People's Protection Units (YPG). Some YPG figures spoke with us," Biçer said, referring to the PKK's Syrian affiliate, the YPG. She also underlined that she has been fighting against these groups ever since and will continue to do so.

"It's been 10 months and there is no news from him and since we then are mourning. He was my only son. Why did they have to take him from me?" Biçer asked, adding that they believe their son is at the YPG's camps in Tal Abyad in northern Syria.

"I'm calling on the HDP. How does this matter regard the Kurds? I'm Kurdish. No one has ever meddled with me. The state has done nothing bad to me. This is the fight for what? You have been taking our sons away from us... explain to me why is that?" she cried.

Fevziye Çetinkaya, on the other hand, together with her husband Şahap Çetinkaya and her four children carried out a sit-in protest on Tuesday and said that she had not been able to reach her son for four days after he left home saying he was going to a football match. She went to the police station on Monday and filed a missing people's report for her 17-year old son.

Çetinkaya stated that she would fight until she was united with her son. Following her attempt to break windows of the HDP building, a brawl between protesters and party officials erupted and police forces stepped in. "We cannot wait for the death of our children without doing anything," she said.

Another woman, Aysel Bozkurt reacted "damned be your Kurdistan cause" and added that those who defend Kurdistan send their children to the best schools while those of the poor die for nothing. "We have no children to sacrifice to the HDP, it is enough," she said.

Although the PKK is presenting itself to the international community as a "defender" of women's rights and claims to be receiving the support of Kurdish women, the incidents that have been ongoing for years actually proves to be exactly the opposite. The current cry of Kurdish mothers demanding their children back is only the tip of the iceberg. Taking children away from their families, however, is not the beginning of a chain of brutalities committed by the PKK.

The very beginning, actually, goes back to the HDP, which is known for encouraging the youth to join the terrorist organization. That is to say, the children abducted by the PKK are first radicalized by the HDP. They are used as an instrument for propaganda and are forced to work. Specialists define four stages of radicalization, the first of which is brainwashing, thereby encouraging the young to join the terrorist organization. This is followed by the processes of armament, violation and going to the mountains.

HDP radicalizes children by brainwashing them

In 2011, families whose children were kidnapped by the PKK terrorist organization once again gathered for a sit-in protest in Diyarbakır to show their discontent toward HDP officials. NGO representatives were also present at the protest and pointed out that abducting a child for war and conflict falls in the U.N.'s category of crimes against humanity. They blamed the HDP for being indifferent to the fact that children are being handed guns and trained for war. One of the fathers, saying that he wanted terrorist activities to end, stated at the time "the organization is conducting this war against Kurds, but the Kurds are not aware of that." Another woman, a mother of nine children, cried out saying that they wrap children up with bombs and explode them. "If being Kurdish means this, then I am not a Kurd but rather Turkish," she expressed.

According to a report released by the Directorate of the Police Academy yesterday, there is no consensus among the academics on the definition of radicalization. "Primarily the PKK carried out terrorist activities in rural areas, however, now it has turned to cities conducting terrorism within the city wars model," the report said. During these wars they armed children and used them in street defense while making 14-year-old children responsible for streets and districts.

The terrorist group also started implementing and adopting an urban warfare strategy in 2015 to carve out enclaves within Turkish territory while using the local population as human shields, using the experience obtained by the YPG during the civil war in Syria. In this urban warfare strategy of the PKK, many children from the local population were recruited to control the streets and engage in clashes with security forces.

In July, the PKK and YPG admitted to recruiting children between the ages of 11 and 16 for terrorist activities in a meeting with a U.N. representative. Virginia Gamba, the U.N. secretary-general's special representative on children in armed conflicts, met with a YPG terrorist in Geneva and signed a deal to end the recruitment of child soldiers. However, the practice of abduction to recruit terrorist militants still continues.

Politicians support the mothers as more raise voices against HDP

Meanwhile, as protests grow, the support from the government and politicians from other parties also grows for the affected families whose children were abducted by the PKK.

Interior Minister Süleyman Soylu late Tuesday touched upon the country's fight against terrorism and the ongoing developments in Diyarbakır during a meeting in Afyonkarahisar province on Tuesday.

"It is our women, our mothers in the east and southeast who will put an end to the terrorist organization," Soylu stated, indicating his support for the women who have raised their voices against the PKK and the party with the recent sit-in protests.

The Nationalist Movement Party's (MHP) Vice Chairman Mevlüt Karakaya, on the other hand, said yesterday that the increase in the number of reactions against terrorism shows that people do not want to lose their children to terror.

"The reactions of the people living in the region bring to light that Turkey's struggle against terrorism is successful. It is important that families react to persons and institutions that draw their children to terror. This also shows the strength of our nation," said Karakaya.