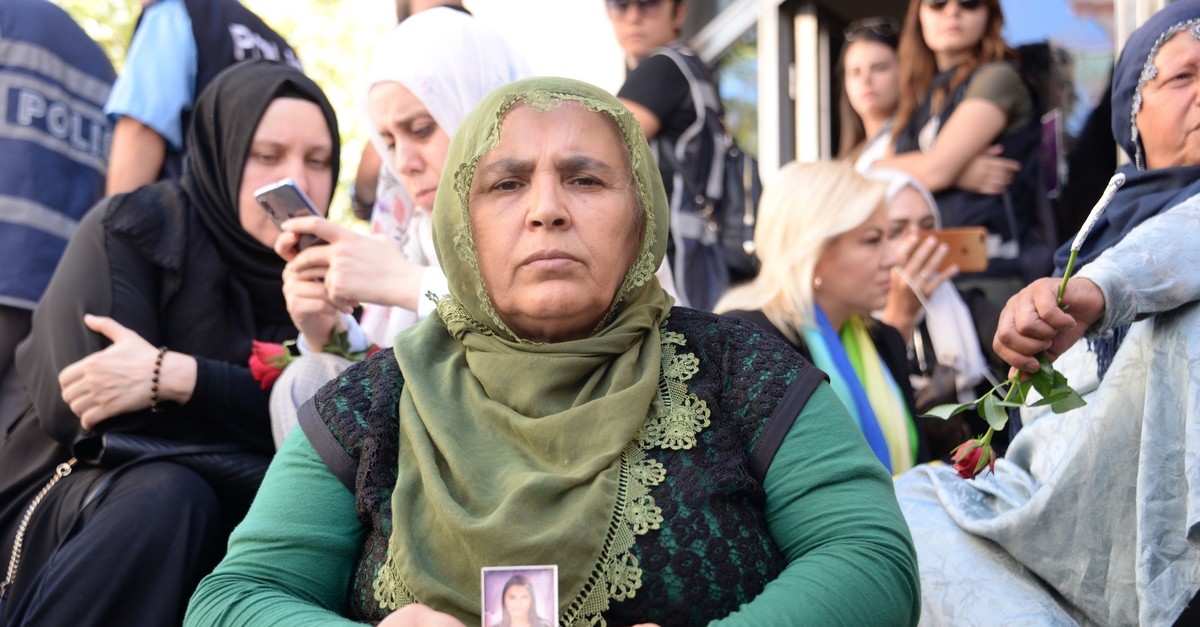 Kurdish mothers, who have been staging a sit-in protest that is above all political ideologies and stances, demand their sons back from the PKK no matter what

It has been two weeks since Hacire Akar, whose son was abducted by the PKK terrorist group, started a sit-in protest in front of the the pro-PKK Peoples' Democratic Party (HDP) headquarters in Diyarbakır. Her protests were soon followed by more families dealing in the same situation, underlining the fact that this is a matter of human suffering and thus above all political concerns. The second stage of the sit-in protests has continued for a week now. The number of families taking part in the protests has increased every day, reaching 15 Sunday.

The HDP, however, has continued to remain silent. Different families have joined Akar's protests, demanding the return of the children kidnapped by the PKK terrorists. The Çetinkaya family is looking for their 18-year-old son Süleyman, who went missing on Aug. 30. The Akkoyun family is looking for their 14-year-old son Azad, who has been missing for four years. The Biçer family's son, on the other hand, has been lost for 10 days and is only 18 years old. The Begdaş family's 16-year-old son Yusuf has been missing since May.

Watching these families protest, many others – from Malatya, Gaziantep, Mersin and Mardin – have also joined the struggle against the terrorist group's brutality.

The Altındaş family is one of them. Their 24-year-old Müslüm was a member of the Turkish military and was kidnapped by the PKK on Oct. 2015 in Tunceli.

Rahime Uymaz, on the other hand, has joined the protests from Mersin, demanding the return of a police officer nephew, the 34-year-old Sedat Yabalak. He was kidnapped by the PKK on July 28, 2015.

Similarly, the Kaya family from Muş is looking for their 28-year-old son Vedat, who was also a police officer and was kidnapped by the PKK.

"We will continue to sit here until our children return. This is our last chance. We've been waiting for four-and-a-half years. There is no giving up," said Uymaz, adding that a person who has not lost a son would not understand what they are going through. "Only the mothers whose hearts ache can understand us," she underlined.

The most recent case, however, took place only nine days ago, when a boy from central Diyarbakır disappeared after going out to play football.

Because the party has previously acknowledged being involved in encouraging the youth to join the PKK, the families' attention, looking for their missing children, automatically turned toward the HDP.

Currently, however, the party rejects any claims on the issue. However, some families are sure that their children are in the hands of the PKK, as the terrorist groups sent voice records, while others have a strong suspicion despite lacking concrete evidence.

Many families also expressed that there are many more families suffering from similar situations but are afraid to come out.

Families call on all political parties to support their cause

Another crucial point is the fact that the families see this protest as their last chance since they have tried every other way possible previously, including applying to the governorship.

"We have not raised our children for the PKK," the families said, while calling on all the political parties and movements to come together and support their cause.

As the protest grows, the support behind it has also increased. Women journalists and writers paid a visit to the families who joined the protest yesterday to show their support to the cause. Sitting alongside the families in front of the HDP headquarters, journalists underlined that the mothers' voices should be heard by everyone. Meanwhile, the call of the families has been largely overlooked by the country's notable artists although some showed support yesterday, saying that the the protest is a stance to save the future of the children who have been abducted by the PKK. Actor Ahmet Yenilmez, Hasan Kaçan, actress Vildan Atasever, singer Murat Kekili were some of the artists to back the families.

"You have shown the strength that we have failed to show," said Yenilmez who visited the families yesterday, referring to the mothers, underlining the peaceful nature of the protests.

Some artists, on the other hand, expressed their support on social media. Singer Cenk Eren shared a twitter post with the hashtag "Anneler Direniyor" [mothers resist], wishing for the mothers to reach their sons peacefully.

"No one can pay away our mothers' rights," said director Semih Kaplanoğlu, while Atasever expressed that everyone should show their reaction to the issue clearly by leaving the political concerns behind.

A social media campaign, "Mothers resist, demand their children," was launched yesterday, calling on people to support the Kurdish mothers' struggle. For days these families have been grieving, saying their children have been abducted. While the children of the poor are fighting for

their lives in the mountains, the politicians' children are living in luxury or studying abroad. Although the PKK presents itself as a "defender" of women's rights to the international community and claims to receive the support of Kurdish women, the ongoing incidents actually prove the opposite.

Current protest only tip of iceberg

The current protest by Kurdish mothers, demanding the return of their children, is only the tip of the iceberg. Taking children away from their families is not the beginning of the series of brutalities committed by the PKK.

The very beginning can be traced back to the HDP, which is known for encouraging youth to join the terrorist organization. That is to say, children abducted by the PKK are first radicalized by the HDP. They are used as an instrument for propaganda and are forced to work. Specialists define four stages of radicalization; the first is brainwashing, thereby encouraging the young to join the terrorist organization. This is followed by the processes of armament and violation before finally going off to the mountains.

In 2011, a similar event took place when families whose children were kidnapped by the PKK terrorist organization gathered for a sit-in protest in Diyarbakır to show their discontent toward HDP officials.

Representatives from different nongovernmental organizations (NGO) were also present at the protest and pointed out that abducting a child for war and conflict falls in the U.N.'s category of crimes against humanity. Blaming the HDP for being indifferent to the fact that children are being handed guns and trained for war, the protesters voiced their anger and asked for the government's help.

Government does its best to eliminate terrorists

Turkish politicians have also showed support for the families, saying anyone who claims to defend human rights must back the cause of Kurdish mothers. President Recep Tayyip Erdoğan voiced yesterday his support for the mothers during a meeting with imam-hatip students in eastern Turkey's Malatya. He said the government is doing its best to eliminate the terrorists.

The protesting families have received huge support from various institutions and leading politicians, including the head of the Great Union Party (BBP) Chairman Mustafa Destici, Good Party (İP) leader Meral Akşener, Turkish Youth Foundation (TÜGVA) head Enes Eminoğlu, the Federation of Relatives of Veterans, Martyrs and Children in Need of Protection (ŞEGAFED) and Interior Minister Süleyman Soylu. Interior Minister Soylu on Saturday said: "All citizens living in Diyarbakır, the eastern and southeastern provinces know the political party [HDP] is a center to recruit people for the PKK. The mothers are taking their revenge on the terrorist organization."

When mothers like Fevziye Çetinkaya, Ayşegül Biçer and Remziye Akkoyun joined the sit-in on Sept.3, the whole movement gained a new dimension.

The families have since been protesting day and night. Çetinkaya even spent the entire Saturday night lying down on the concrete floor. The 13 families are waiting and frequently stating that they will not leave until their children are returned. Çetinkaya, who is protesting with her husband, cried out "I don't know in what

state my son is in. Maybe they have hidden him, killed him or put him in a cave. Our hearts are being torn, waiting here for days in the middle of the street." Meanwhile, Biçer family claimed yesterday that they have been threatened by three members of the party's youth branch.

Father Mustafa Biçer said that they were threatened by three people with a long-barreled gun who claimed to be with HDP's youth branch in Bağlar district.

"They threatened us to end the sit-in protest in front of the provincial office of the HDP," Biçer said, adding that they were threatened with death if they continued their protest.

Biçer noted that they will not step back and added: "We want our children back."

He said that the members of the youth branch were also being deceived, and called on them to "wake up" to the reality.

"These threats are done under order of the HDP members. They are using our own children against us," he said.

Biçer said that efforts were underway to capture the individuals after security forces were informed about the incident.

An investigation has been launched into the HDP figures who threatened the family yesterday.