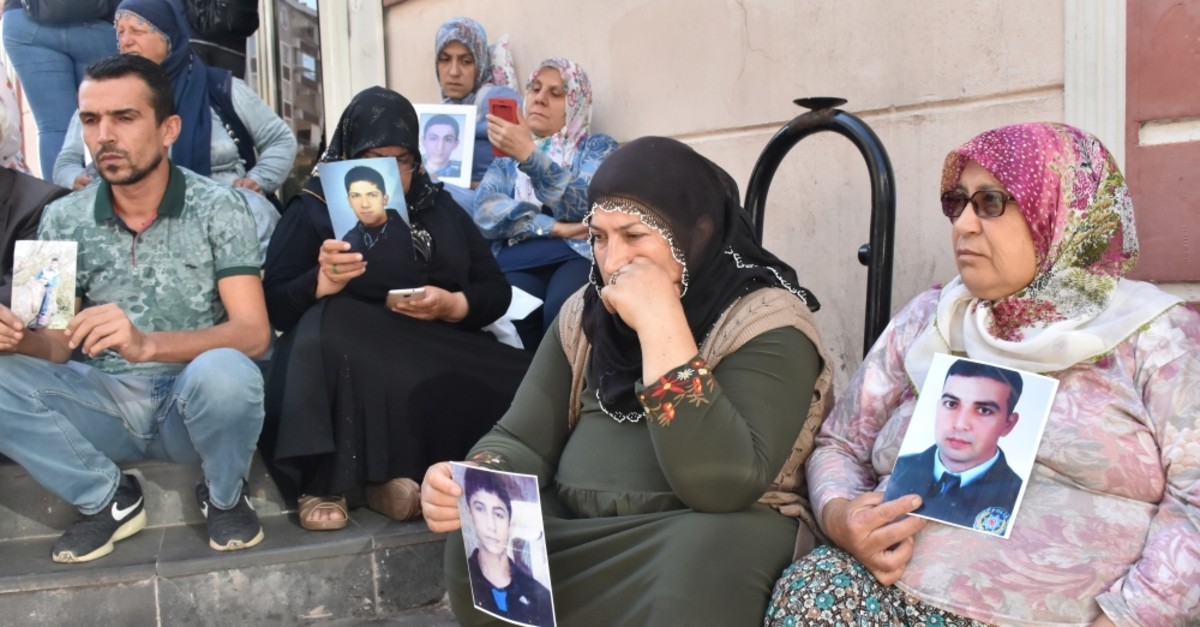 Members of Parliament and representatives of civil society showed up to support the mothers of children abducted by the PKK terrorist organization protesting in front of the Peoples' Democratic Party (HDP) headquarters in southeastern Diyarbakır province. In this past week, a growing number of families have started participating in the sit-in protests. Accusing politicians, artists and academics of staying silent on the cause of the Kurdish mothers in Diyarbakır, the head of Parliament's human rights commission, Hakan Çavuşoğlu, said that concrete and strong support is needed to strengthen the struggle of families looking to learn about the fate of their children. Like Çavuşoğlu, Canan Kalsın, head of the Parliamentary committee on equal opportunities for women and men, said that the HDP's position cannot be regarded separately from the PKK as the party has strong affiliations with the terrorist organization.

The protests started two weeks ago with a cry of a mother, Hacire Akar, who launched a sit-in protest on the steps of the HDP's headquarters for her 21-year-old son. Unlike many of the other mothers, it took three days for Akar to reach her son and complete her mission.

"The outcry of the mothers of abducted children in Diyarbakır is a most honorable stance against those who are seeking terror and conflict," Vice President Fuat Oktay said Monday in the capital Ankara.

The number of families that have been protesting in front of the HDP building and accusing the party of encouraging the youth to join the terrorist organization has reached 20 yesterday, with two more joining the protests.

More support to the grieving families came from Abdullah Özer, who unfurled a Turkish flag to express symbolic support for their struggle. He also met with the families.

Oya Eronat, a Diyarbakır deputy from the ruling Justice and Development Party (AK Party), listened to the requests of the protesting mothers. Eronat, herself, is a victim of the terrorist group after losing her son in a terror attack perpetrated by the PKK in Diyarbakır.

"As a mother of a martyr, I wanted to come together and witness the sorrow of these mothers who lost their sons," Eronat said. When more mothers including Fevziye Çetinkaya, Ayşegül Biçer and Remziye Akkoyun gathered on Sept. 3 after Akar, the whole movement gained a new dimension.

The families have been protesting decisively day and night and Çetinkaya was even seen lying on the concrete ground the whole night on Saturday. Eighteen families are still waiting and protesting, frequently stating that they will not leave until their children are delivered back to them.

President of the Social Aid and Solidarity Foundation for Children, Mothers and Elders in Need of Protection (HİMYAÇDER), Ayşe Ece Budan, and members of the foundation visited the Kurdish families and expressed support for their "holy cry."

Reminding the international community of the European Convention on Human Rights, the Universal Declaration of Human Rights and the Convention on the Rights of the Child, Budan stated that the voice of mothers should be paid attention to and all related parties should act with responsibility to contribute to the solution. In 2011, a similar event took place where families whose children were kidnapped by the PKK terrorist organization gathered for a sit-in protest in Diyarbakır to show their discontent toward HDP officials.

Nongovernmental organization (NGO) representatives were also present at the protest and pointed out that abducting a child for war or conflict falls in the U.N.'s category of crimes against humanity. Blaming the HDP for being indifferent to the fact that children are being handed guns and trained for war, the protesters voiced their anger and asked for the government's help.