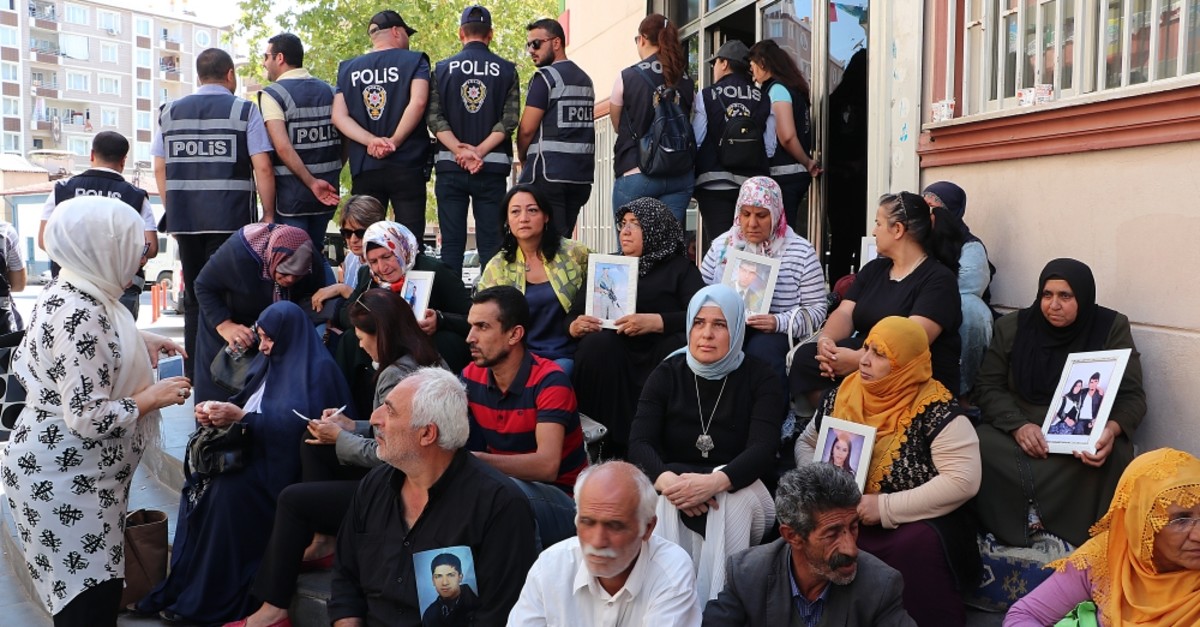 The sorrow of mothers whose children were abducted by the PKK terrorist organization is acknowledged by the families who have suffered similar grief when their children were killed by the PKK. Many families share the mothers' pain of losing their children during the PKK's ongoing 30-year terror campaign against Turkey. The Foundation for Families of Martyrs and Veterans (TÜGŞAV) organized a visit on Tuesday to give support to families protesting the PKK in front of the Peoples' Democratic Party (HDP) headquarters in southeastern Diyarbakır province. "They are abducting the children of poor families to the mountains, while their children are living in luxury hotels, getting education in colleges. We do not accept this situation," said TÜGŞAV President Lokman Aylar during his speech in front of the HDP building. Aylar also stressed that the bravery of mothers in Diyarbakır should encourage all families whose sons were abducted by the PKK to demand justice.

Previously, families accused the party's leaders of sacrificing regular people's children while providing luxurious lives for their own kids. "They kidnapped my children [and took them] to the mountains, while their children have a luxurious life in France," said Celil Begdaş last week, who asserted that his 17-year-old son Yusuf was brought to the PKK with the assistance of the HDP.

Begdaş showed photos of party Co-chair Pervin Buldan's son in a luxury car in Paris, and another picture of Buldan's daughter who is receiving her college education in London.

Oya Eronat, a Diyarbakır deputy from the ruling Justice and Development Party (AK Party), also visited the protester in front of the HDP headquarters and listened to the requests of the protesting mothers. Eronat herself is a victim of the terrorist group after losing her son in a terror attack perpetrated by the PKK in Diyarbakır.

"As a mother of a martyr, I wanted to come together and witness the sorrow of these mothers who lost their sons," she said.

Along with the martyrs' families, support from all parts of society for the mothers has been growing. Ruling Justice and Development Party (AK Party) spokesperson Mahir Ünal criticized artists and academics who have refrained from announcing their support to the mothers. "The academics were accusing the state of carrying out a massacre instead of standing against the PKK. Why do they stay silent now? Where are the artists creating a fuss in even the most insignificant incidents?" he said yesterday in southeastern Kahramanmaraş province.

Also, the leader of the Felicity Party (SP) Temel Karamollaoğlu said yesterday in Ankara that the party hopes the cause of grieving families will reach its goal, declaring the SP's support for their campaign.

In order to support the mothers, 50 nongovernmental organizations (NGOs) from northwestern Kocaeli province are expected to arrive in Diyarbakır today. The NGO heads said that they will stand with the mothers' struggle against the PKK terrorist organization.

The protests started two weeks ago with the cry of a mother, Hacire Akar, who launched a sit-in protest on the steps of the HDP's headquarters for her 21-year-old son. Unlike many of the other mothers, it took three days for Akar to reach her son and complete her mission.

Since that day, the number of families who want to learn about the fate of their children has gradually increased and reached 21 with the recent participation of three families. One of them, Mehmet Karaman, whose 18-year-old son Ercan was taken to the mountains by the PKK 22 years ago, said that he wants to know whether his son is dead or alive.

Sharing a similar fate with Karaman, Fatma Akkuş, who claimed that her daughter Songül was persuaded by the PKK to join the terrorist organization, said that she watched footage of her daughter on social media while she was joining the PKK. "I went to the party but they did not share any information with me. When they took my child, she was 15. I haven't received any news from her for five years. I will stand with the mothers," she said.

While the outcry of families have been growing, the indifferent attitude of HDP officials has drawn serious reaction from the mothers and society.

On Tuesday, another HDP deputy ridiculed the grieving mothers of children abducted by the PKK terrorist organization.

Mentioning a video of a Twitter user mocking the mothers and saying that he will also launch a hunger strike in front of the party headquarters due to financial drawbacks, HDP Siirt deputy Meral Danış Beştaş wrote with a smiling emoji that their provincial building is open to everyone and they are expecting him to come.

Under Beştaş's post, many HDP supporter accounts also mocked the mothers' sit-in protests, expressing that they will launch protests for different reasons.

Previously, HDP Diyarbakır Deputy Saliha Aydeniz said "good luck" while she was passing by the mothers, an attitude faced with a harsh reaction. "We don't need you to wish us luck, we want our children back," the mothers told Aydeniz.