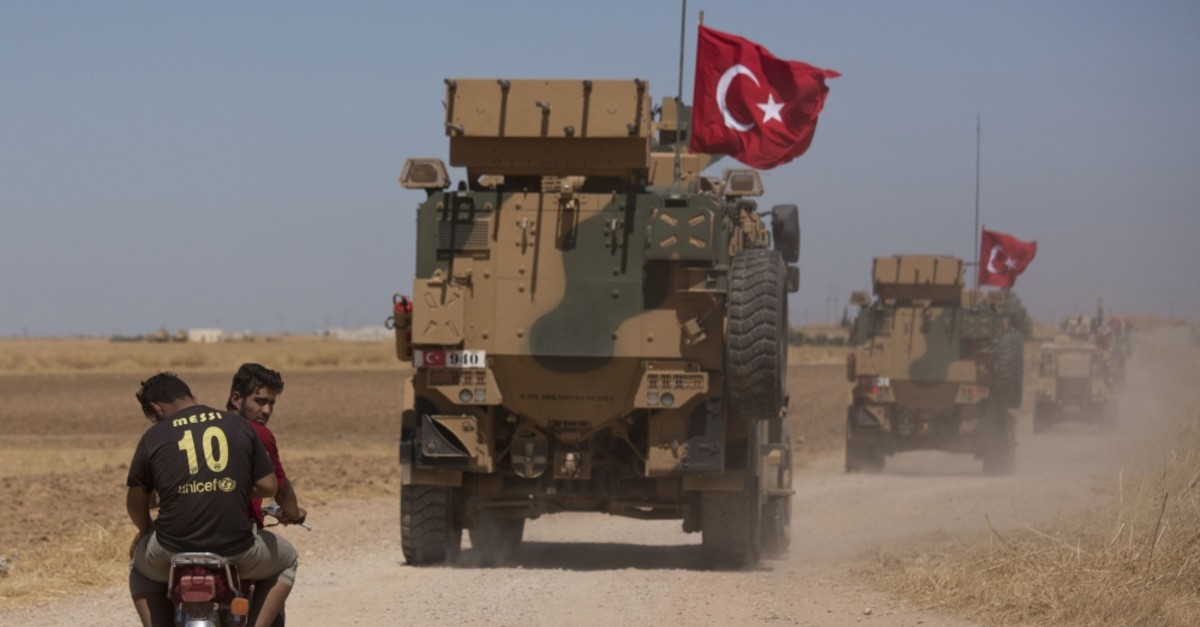 Two men on a motorbike follow Turkish and American forces as they conduct their first joint ground patrol in the so-called ,safe zone, on the Syrian side of the border with Turkey, , Sept. 8, 2019.
by Şeyma Nazlı Gürbüz Sep 14, 2019 12:04 am

Despite the joint steps that are being taken with the U.S. over the formation of the safe zone in northern Syria, Turkey is still skeptical over the intentions of its NATO ally

While Ankara has explained the necessity of a safe zone in northern Syria, the U.S.' lack of a plan regarding the zone has led to much skepticism on Turkey's part.

"Currently, our helicopters [together with U.S. forces] continue bilateral logistic air operations. At this point, we place importance on the U.S.' actions against the YPG [the PKK's Syrian affiliate, the People's Protection Units]. Is [the U.S.] adopting the attitude we need it to have? No, it isn't," President Recep Tayyip Erdoğan said Friday.

Erdoğan's most recent statements were only a few of the many expressed over the past few months conveying concerns regarding the U.S., especially when it comes to cooperation between the countries on the establishment of a safe zone. Turkey-U.S. cooperation in Syria recently intensified after the two countries agreed on Aug. 7 to establish a safe zone east of the Euphrates River in northern Syria.

The safe zone agreement envisages setting up the necessary measures to address Turkey's security concerns, including clearing the zone of YPG terrorists. It also includes measures to create a safe and stable living space for Syrian refugees returning from Turkey. Turkish officials have frequently said another refugee wave was quite possible due to continuous regime attacks, particularly in northwestern Syria's Idlib.

Hosting over 3.6 million Syrians, Turkey is the world's top refugee-hosting country at the moment and plans to settle about a million of them back to the peace corridor to be established in northern Syria.

According to Hüseyin Alptekin, an academic from the Foundation for Political, Economic and Social Research (SETA), there are two reasons why Turkey has trust issues with the U.S.

"First of all, we know that the U.S has been overlooking Turkey's interests in almost every case that the two countries have encountered, from the Eastern Mediterranean to Syria. I believe the U.S. looks at Turkey not as an ally but as a passive power that lacks value," Alptekin said, adding that this situation has been ongoing since the Barack Obama era.

The second reason, in Alptekin's opinion, is the fact that the two countries have already experienced a failed cooperation effort in Manbij.

"In Manbij, there were few promises that the U.S. gave. There was a road map and the YPG terrorists were supposed to retreat from the region. Then, in the end, Turkey and the U.S. were supposed to have joint control over the region. Yet, it's been three years, and none of these promises have been kept," Alptekin said.

Before the safe zone deal, Turkey and the U.S. agreed on a road map in June 2018, foreseeing the withdrawal of the YPG from northern Syria's Manbij and initiating joint Turkish-American patrols, which eventually began last November. However, the process has been sluggish as the terrorist group maintains a presence in the city despite the three-month timetable set to implement the deal.

Alptekin stated that a similar process has been ongoing for the safe zone plan as well.

Turkey wants the safe zone area to be 32 kilometers wide in order to secure its borders, clear the area of terrorists and provide refugees a safe space. However, the U.S. aims for less, resisting Turkey's demands on the issue.

"The U.S. aims to have a small safe zone near the Turkish border and then a quasi-state of the YPG right beside it. However, Turkey's aim with the safe zone plan is not to create a safe area for terrorists," Alptekin expressed, indicating that the minimum width of a safe zone should be 32 kilometers for it to function effectively.

"One reason why the Syrian refugees in Turkey are unwilling to go back to Syria is that it is evident that they will face oppression even death by the Assad Regime and by the YPG east of the Euphrates River," said Ali Demirdaş, a political analyst, stating that the possibility of safe zone becoming a new home for the refugees is one of the main reasons why Turkey want to pursue this plan.

US vision for east of Euphrates totally different from Turkey's

In Demirdaş's opinion: "The deeper the safe zone the better for Turkey."

"America's plans in east of the Euphrates are fundamentally different from those of Turkey. Washington is trying to create an autonomous region or even a state with the YPG in full control. When the political atmosphere is right, Washington is likely going to unilaterally recognize it as a state, just like it recognized the Golan Heights as part of Israel," Demirdaş expressed, adding that Turkey's distrust for the U.S. with regards to the safe zone stems from the fact that Washington has been avoiding addressing Turkey's above-mentioned concerns by stalling the process.

While Turkey's skepticism toward the U.S. continues, developments in the region prove the country is right to be skeptical as YPG terrorists escalate their military preparations along the border.

Drone footage released Friday by public broadcaster TRT shows two separate YPG terrorist sites across Turkey's southeastern Şanlıurfa province, proving that the terrorist group is still active in the region. The footage shows sandbagged trenches and ditches at the sites. According to the reports from the area, although these two are some of the biggest terrorist sites, there are many other similar sites along the Turkish border, threatening the country's national security.

However, according to Alptekin, Turkey will no longer be patient with the U.S. if the safe zone is not established the way it was initially discussed.

"I believe if the safe zone is not the way Turkey wants it to be, the country will conduct its own operation in the region. Currently, despite the joint steps being taken, the demands of Turkey are far from being realized," he added.

According to Demirdaş, Turkey is aware that the joint patrols, which consist of driving alongside the American vehicles some 10-20 miles and flying two helicopters to the east of the Euphrates here and there, are nowhere near enough to address Turkey's concerns.

Pointing to the divisions in various Washington institutions when it comes to country's U.S. policy, Demirdaş underlined that there is a tug of war between the two command centers within the Pentagon and therefore, the U.S. approach to the YPG will be determined greatly by which command centers will become more influential.

"The impression is that the U.S. European Command (EUCOM), the American unified combat command, whose area of responsibility covers Europe and Russia, is more sympathetic to Turkey's needs by emphasizing the NATO alliance, while the U.S Central Command (CENTCOM), which covers the Middle East and the Central Asia, behaves in a way that is detrimental to Turkish-American relations," Demirdaş explained the division.

Erdoğan on Sunday said Turkey could launch its own operation soon if the U.S. did not take any concrete steps by late September.

Previously, speaking on the establishment of a joint operation center in the border district of Akçakale to facilitate the safe zone process and to monitor the retrieval of weapons given to the PKK-affiliated YPG by the U.S., Defense Minister Hulusi Akar also said Turkey has a plan B and a plan C ready in case Washington backtracks on its promises.

Turkey has undertaken several successful military offensives in northern Syria, such as Operation Olive Branch and Operation Euphrates Shield, to eliminate terrorists along the border, including the YPG and Daesh. Another unilateral intervention east of the Euphrates remains a strong possibility.

"I don't think the current situation in the area east of the Euphrates is sustainable. Turkey will do everything in its power, which it stated in the latest National Security Council (MGK) meeting, to prevent a YPG state from being formed. In fact, the joint patrols began when Turkey displayed its resolve to stage an incursion. This shows that if Turkey is resolute, there is the possibility that the US will likely back down since the YPG is not worth starting an all-out military conflict with the second-largest member of NATO," Demirdaş said.

US deployment in Syria remains unchanged despite safe zone

U.S. force levels in Syria will remain unchanged, Pentagon spokesman Sean Robertson said on Thursday amid claims that the number of U.S. soldiers will be increased for the establishment of a safe zone in northern Syria.

"While we are working to implement the president's direction to withdraw troops from Syria in a deliberate and coordinated manner, force levels will be dictated by conditions on the ground," Robertson told Anadolu Agency (AA).

Details regarding the numbers or timelines would not be discussed "for security reasons," he said.

The New York Times (NYT) reported earlier Thursday that the Pentagon is poised to send nearly 150 troops to northeastern Syria "to conduct ground patrols with Turkish forces." The NYT was the first to report the Pentagon's alleged plans, which would be another step by Washington to ramp up partnership with Turkey over its long-standing concerns about ongoing U.S. support for the YPG.

Ankara has long objected to U.S. support for the YPG, a group that terrorizes local people and poses a threat to Turkey. The PKK has killed over 40,000 people in Turkey, including women, children and infants, in its decades-long terror campaign.

The U.S has nearly 1,000 troops in Syria, mostly working with with the Syrian Democratic Forces (SDF), the YPG-led group with which it partnered, purportedly for its fight against Daesh.

U.S. President Donald Trump in December ordered a withdrawal of U.S. troops from Syria, but the Pentagon's newest plans may signal a temporary reversal.

Final approval of the deployment awaits the success of joint ground patrols with Turkey in the coming days, military officials told the NYT.

U.S. military and diplomatic officials declined the NYT's request to comment on the possible deployment.

A senior administrative official had told the paper last month that Washington would "provide forces necessary" for joint patrols in northeastern Syria, noting that a few dozen troops are carrying out similar patrols with Turkish soldiers in Manbij. But the official was not clear on whether the forces provided would add to the overall number of U.S. troops in Syria or simply replace troops being sent home from SDF-partnered activities.

Referring to the formation of the safe zone, Robertson said: "The United States has taken steps to implement the provisions of the security mechanism rapidly and in some cases ahead of schedule."

"We are committed to working closely with our Turkish ally precisely to enhance our cooperation, coordination and consultation," he added.