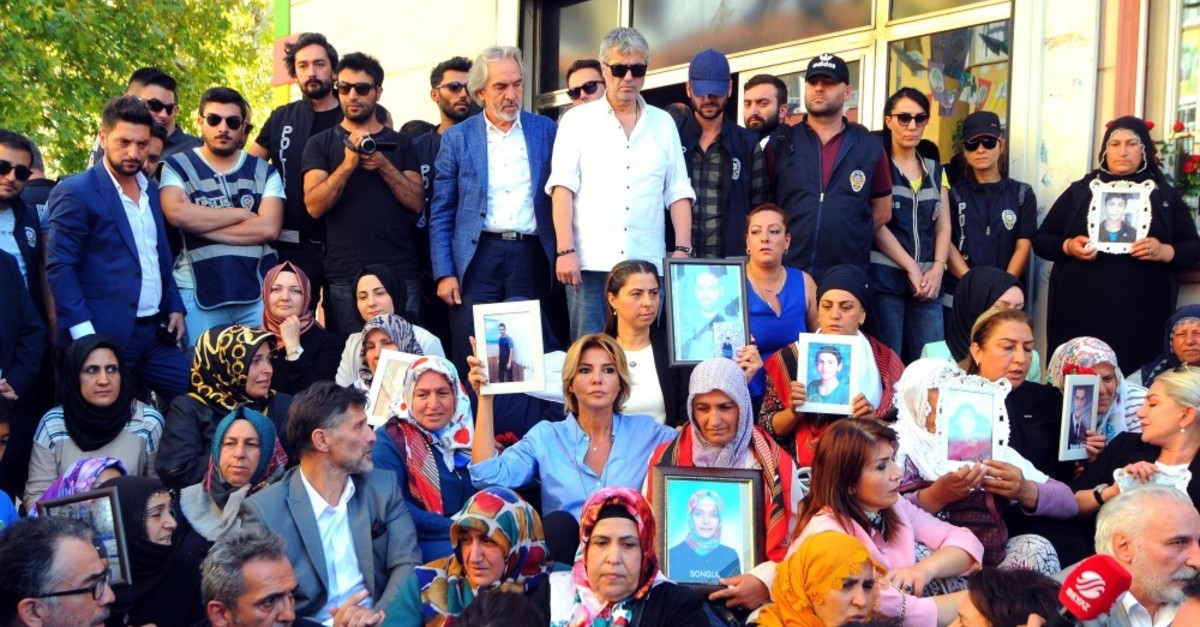 Celebrities support Kurdish mothers by sitting alongside with them during their protest against the PKK in HDP headquarters in Diyarbaku0131r, Sept. 13, 2019.
by Daily Sabah with AA Sep 14, 2019 12:04 am

With one son forced to join the PKK and another serving in the army, a Kurdish mother among those protesting the terrorist PKK in Diyarbakır feels torn and fears her sons may kill each other without knowing

"One of my sons is a soldier and another one joined the PKK 10 months ago. My greatest fear is their confrontation and pointing their weapons at each other," said Latife Ödümlü who recently joined the sit-in protests of mothers whose children were abducted by the terrorist group. As their protest in front of the pro-PKK Peoples' Democratic Party (HDP) headquarters in Diyarbakır has entered almost its second week, they are still demanding answers from HDP officials regarding the fate of their children.

Just like other grieving families, Ödümlü has been struggling to learn about her university student son for a long time and has pursued many methods in her search.

"We knocked on many doors with my daughter in Diyarbakır, but got no answer, and then we went to Van, Hakkari and Bitlis, but did not find any clues about my son there either. After, we found out as result of our investigations that he may be in northern Iraq. I got a passport and traveled to Makhmour Camp and some other camps. However, I couldn't find him at these camps either," Ödümlü said.

She added that she initially went to HDP officials due to her suspicions regarding the party's assistance to her son joining the terrorist organization, even though the party's members have claimed that they don't have any information about him.

After Hacire Akar took the first step by showing courage and raising her voice against the terrorists on Aug. 22, her son Mehmet Akar rejoined her on the fourth day. While rescuing her son, she revealed the HDP's link with the PKK, which became an inspiration for other families in the same situation.

A common theme among most families was that their children were paying visits to HDP headquarters, while some say their children were last seen in the building. Currently, however, the party rejects any claims on the issue, but some families are sure their children are in the hands of the PKK, as the terrorist group sent them voice recordings, while others have a strong suspicion despite lacking concrete evidence. Many families also indicated that there are many more families suffering in similar situations but are afraid to come forward.

Yet, the number of families has grown each day in the protests. With the participation of one more family, the number has reached 22.

Fatıma Bingöl, 45, told Anadolu Agency (AA) her 14-year-old son went missing five years ago. "One day he said he was going to look for a job and never came back," she said.

"I am constantly looking for him. I haven't abandoned him. I will do whatever I can for him; even sacrifice myself. The [HDP] party says: 'Don't worry about your son. He is there.' However, I haven't heard anything about him."

The father, Şevket Bingöl, said his son was deceived by the HDP and kidnapped and taken to the mountains. He said he would continue his protest until his son comes home.

Another father, Süleyman Aydın, whose 15-year-old son Özkan's whereabouts remain a mystery after he got lost four years ago in Diyarbakır's Sur district, criticized the attitude of HDP officials. Stressing that he met with the former co-chair of the HDP, Selahattin Demirtaş, who is now imprisoned on terror charges, to discuss the situation, Aydın claimed that Demirtaş told him that his son "went to the mountains probably on his own, and there is nothing that can be done."

Despite HDP officials remaining indifferent on the issue, reactions from all parts of society have been growing day by day.

Despite the HDP officials remaining indifferent to the issue, reactions from the government and all sections of society have been growing day by day.

President Recep Tayyip Erdoğan Friday emphasized the significance of the mothers' stance against PKK, encouraging more families to demand the HDP be held to account.

"There is a fear, otherwise thousands of people would have gone there. As the state, we are behind the mothers and following the process," he said.

Interior Minister Süleyman Soylu also visited the families on Friday, saying that the significance of the mothers' actions will be better recognized in the years to come.

"Everyone in Diyarbakır and Mardin knows that HDP organizations take these innocent children to the terrorist organization. We also know that and will do whatever is necessary," he said.

Locals in the Kurdish-majority southeastern province of Mardin organized a march Thursday to support the protesting mothers and to raise their voices against the PKK's actions in the region.

Gathering in Artuklu district of Mardin, demonstrators holding Turkish flags condemned recent terrorist attacks perpetrated by the PKK in which Mardin Special Forces Cdr. Tufan Kansuva and two soldiers were killed, declaring their support for the grieving families searching for their children in front of the HDP building. Some locals supported the march by flying Turkish flags from their balconies throughout the streets.

Making a speech on behalf of the group, İbrahim Ertakgöz said they poured into the streets against the PKK terrorist organization, which sows discord among people living in Mardin, emphasizing that they will continue to stand against attempts trying to divide the country.

"We state once again that we are the voice of the mothers who keep watching for their children," Ertakgöz said, referring to the mothers organizing sit-in protests for almost two weeks in Diyarbakır.

Another local who attended the march named Şükran Işık said they participated in the demonstration for the martyrs, adding that they will always be supporters of the Army and police forces.

During the visit, Bingöl told reporters that they made they visit to create social awareness for the mothers. "There cannot be politics in the cry of a mother."

Ersoy stressed that she hopes the mothers will rejoin to their children as soon as possible, adding that the mothers' protests will inevitably change Turkey.

Also, in an interview with a daily newspaper, Fatoş Güney, wife of the Turkish legendary left-wing artist and director Yılmaz Güney, who died in 1984 during exile in Paris, declared her support for the grieving mothers. "I am with those mothers with all my heart. They should be reunited with their children," she said.

While the mother's sit-in protest continues, HDP's Hakkari deputy issued a controversial statement, saying, "As long as the Kurdish problem remains unresolved, there will be more conflict, war and use of 'guerilla' tactics." What she refers to as "guerilla" is the PKK, which is recognized as a terrorist organization by the U.S., EU, Turkey and many other countries, and is responsible for the deaths of nearly 40,000 people during its decades-old campaign.

The mother's protest was also on the agenda during a press conference by U.S. State Department spokesperson Morgan Ortagus on Thursday.

Ortagus told reporters in response to a question that the the U.S. is aware of the demonstrations, reiterating U.S. support for freedom of expression, but Ortagus did not address the grievances of the families that led to the demonstrations.

"When we are asked about these questions in general about people protesting, I'd just reiterate that the United States supports freedom of expression and assembly, including the right to peacefully protest," she said. "We believe that right is fundamental to any democracy."