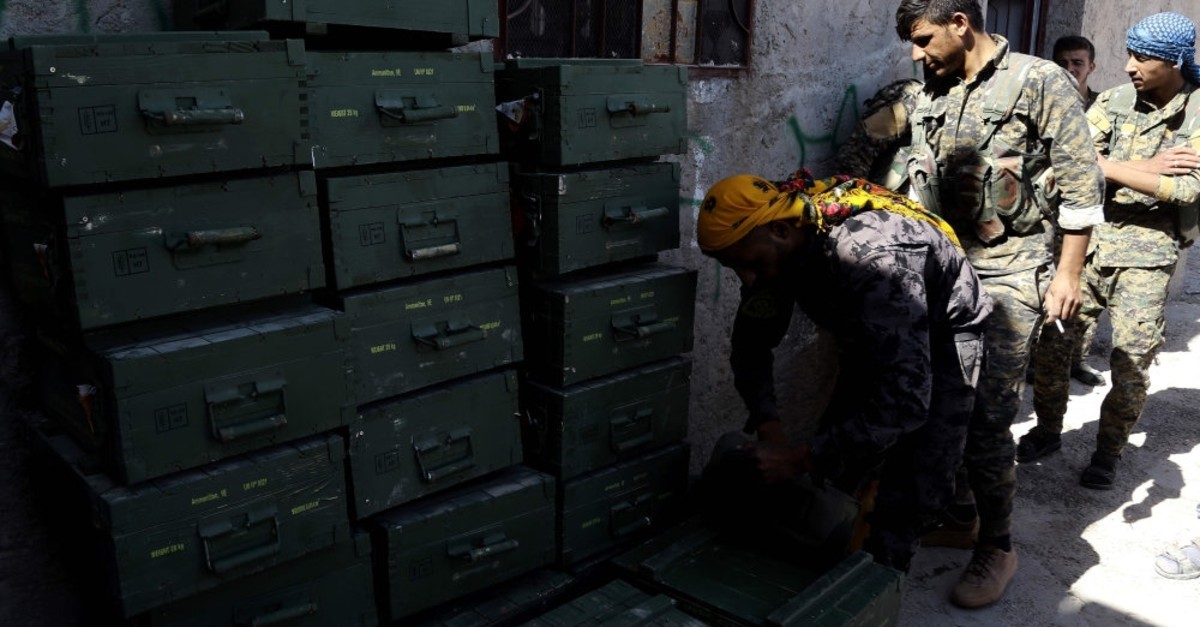 The U.S., while listing PKK as a terrorist group, maintains steadfast military support for its Syrian affiliate Peopleu2019s Protection Units (YPG) by providing truckloads of military supplies and military training under the pretext of fighting Daesh.
by Daily Sabah Sep 18, 2019 12:14 am

The presence of ammunition depots used by the YPG in northern Syria and the U.S.' ongoing military equipment support to the group trigger Turkey's concerns about national security

Ammunition depots belonging to the PKK terrorist group's Syrian offshoot, the People's Protection Units (YPG), in northern Syria pose a major threat to Turkey's borders and national security. Most of the depots were established via the U.S.' continuing military support for the YPG terrorist group in recent years. With its direct involvement in the Syrian civil war since September 2014, the U.S. has built several ammunition depots in northern Syria used by the YPG. A recently released media report details about these ammunition depots filled with heavy weapons and artillery.

It was reported that the U.S. has been using wheat silos and oil wells as ammunition depots in the towns of al-Hasakah, Raqqa and Deir el-Zour. Having 22 military bases in these three locations and Manbij, the U.S. has continued providing military equipment and ammunition to the YPG.

As Talel Silo, a former executive in the YPG, stated that Karaçok had the biggest ammunition depots of the group before the airstrikes. Since then, the alliance of the YPG and U.S. has changed strategies, Silo said. Turkey conducted airstrikes targeting the Karaçok region in Hasakah on April 25, 2017.

"Following the TSK's [Turkish Armed Forces] operation, CENTCOM [U.S. Central Command] officials came to the area and told us to lower the volume of depots and spread them all over the area," he further said.

The U.S.' Syria policy, especially its military support for YPG terrorists, has been a cause of tension between Ankara and Washington. Ankara argues that one terrorist group cannot be used to fight another. Turkey sees the YPG as an extension of the PKK, which has claimed the lives of more than 40,000 people in its 30-year terror campaign against Turkey.

The U.S., however, while listing the PKK as a terrorist group, maintains steadfast military support for the terrorist organization by providing truckloads of military supplies and military training under the pretext of fighting Daesh at the expense of losing its NATO ally.

To reduce tensions, Turkey and the U.S. agreed on a road map in June 2018 foreseeing the withdrawal of the YPG from Manbij and installing joint Turkish-American patrols, which began in November. However, the process has been sluggish as the terrorist group was still present in the city despite the three-month timetable set for implementing the deal. Ankara has been pointing out that it will not allow the YPG to strengthen its grip in Syria. Turkey is also prepared to launch an operation east of the Euphrates to eliminate the YPG.

However, following the U.S. decision to withdraw from Syria, Ankara decided to put the operation on hold for some time. While establishing a safe zone would eliminate some of Turkey's concerns, the presence of the YPG in Syria and its plan to form a quasi-state will continue to present a threat to the country.

The agreement also envisaged setting up necessary security measures to address Turkey's security concerns, including clearing the zone of the PKK and the YPG.

The countries' armed forces had previously done five joint helicopter flights and a land patrol. The joint patrols were conducted as part of the agreement over the planned establishment of a safe zone in northern Syria. Ankara has warned that if the establishment of such a zone is delayed, it will take cross-border military action to remove the terrorist threat at its southern border.

President Recep Tayyip Erdoğan on Monday reiterated that Turkey will implement its own plan if the U.S. fails to take concrete steps in the establishment of a planned safe zone.